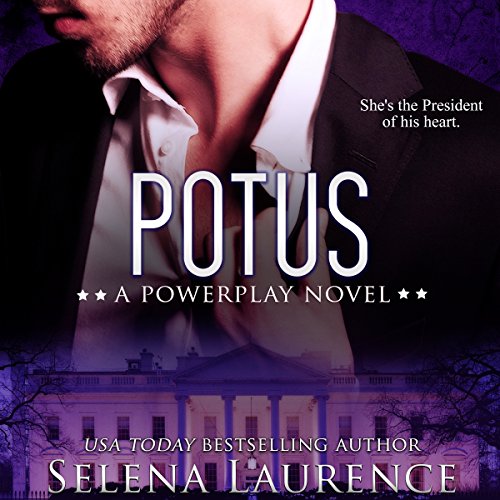 By: Selena Laurence
Narrated by: Rock Engle
Free with a 30-day trial

She's the President of his heart.

A leader beloved by her nation. Jessica Hampton is the heir to a political dynasty, and the first woman President of the United States. For six years she has given up everything in order to fulfill her late husband's legacy. But now, as her term in office draws to a close, she wants nothing more than to finish with the dignity her family demands. But when Jessica begins to negotiate an important Middle East accord with the sexy Egyptian Ambassador, being President takes a back seat to being a woman.

A man trapped on all sides.

Kamal Masri knows all about being an heir. He's not only Egypt's Ambassador to the US, he's the first-born son of one of the world's wealthiest men. Kamal's father has controlled his fortune, his career, and now possibly his life, because when the Egyptian parliament instructs him to negotiate an accord that threatens his father's illegal business dealings, all hell breaks loose. But as dark forces from the far side of the globe conspire to destroy the accord, Kamal is prepared to do whatever it takes to win Jessica's love. He'll fight to protect her, even from his own country.

What listeners say about POTUS

Better Storyline and Rock has Improved!

This was so much better than The Kingmaker! This had a better storyline and Rock did a much better job on Jessica’s voice than he did on London’s previously. Plus he did an amazing job on those intimate scenes again. God his voice even gets me. Loved this! Can’t wait to dive into the next one.

POTUS is the third book in the Powerplay series. Though the timelines are interconnecting, it is best if they are read in the order of release.

Is Jessica old enough to be the president? I was preoccupied with the details of her age at the time of her husband’s passing, how much time has passed, etc., and trying to determine if she could have possibly been 35 when she was elected! This is what happens when a math nerd likes to read.

On the other hand, she is exactly who so many wish actually was the 45th president of the United States – empathetic, young, intelligent, and approachable. That is as political as you will ever hear me get. Take what you will from that statement.

Now, set that aside and let’s talk about the romance and the old world chivalry of Kamal Masri. He is absolutely swoon-worthy. He is tall, dark, handsome, and has that tiny silver earring in his left ear that brings on fantasies of swashbuckling on the high seas. When it comes to a choice between a cowboy and a pirate, I’m going to pick the pirate every time!

I have already listened to this twice and I know that I will be pulling this series out to listen to again when I am between available options. After all, I still have a long commute every week and I want books that entertain and delight. This series is my go-to.

Note: while I was given this book as a gifted ARC, my opinions are my own and are given freely.

This story was a very pleasant surprise. A new to me author, Selena Laurence impressed me with her characters, the story-line, the romance, the convincing conflict and the beauty of the love shared between the protagonists. I was a bit doubtful at first that the author could pull this off as the story takes place in the US’s highest public office between a single female President and an Egyptian Ambassador. You have to have mature, worthy characters for those positions. And Ms. Laurence carried it off with a classy, heartfelt love story that tore at my heart. The sexy times were tasteful and not too much as to overwhelm the story or be boring. Just right. I’ll be back for more of her novels.

Rock Engle did a wonderful job narrating and performing all the voices, male, female and accented. Loved it.

I recommend this novel.

I have loved this series very much. I believe this was the only one left that I had not read before now. I love them all.