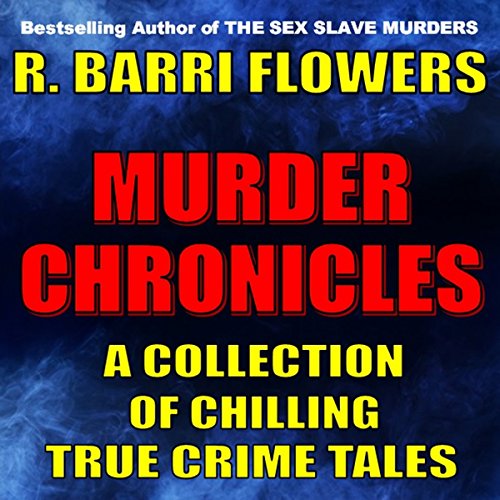 By: R. Barri Flowers
Narrated by: John Eastman
Try for $0.00

From award winning criminologist R. Barri Flowers and the best-selling author of The Sex Slave Murders 1 & 2, Serial Killer Couples, and Murder of the Banker's Daughter comes Murder Chronicles, a gripping collection of true crime tales. Includes ten compelling stories of murder, madness, and mayhem that span nearly a century of American history and homicidal criminality that will keep you reading from beginning to end, while staying with long after. "Murder at the Pencil Factory", the brutal murder of a young girl turn locals into vigilantes out for justice. The "Gold Special" Train Robbery, a daring train robbery by a trio of brother bandits goes wrong and turns deadly. "Murder of the Banker's Daughter", a brazen abduction of a schoolgirl turns tragic as authorities hunt for the killer. "Mass Murder in the Sky", a mother's Christmas gift turns deadly, exploding in airliner above Denver, with a domestic terrorist on loose.

"The Amityville Massacre", family is shot to death by a killer too close to home. Inspiration for The Amityville Horror movies. "The Pickaxe Killers", pair of killers seek revenge and pay the price themselves. "Murderous Tandem", two killers pick off victims one by one till brought to justice. "Murder in Mission Hill", a wife's murder draws national attention with an unlikely killer on the loose. "Murder in Bellevue", in a case of parricide, a teenage girl's obsession turns deadly. "Murder of a Star Quarterback", adultery, jealousy, fame, and fortune turn deadly for a well-known ex-football great. Bonus material include excerpts from bestselling true crime books by R. Barri Flowers, The Sex Slave Murders and Serial Killer Couples.

What listeners say about Murder Chronicles

This narrator will drive you crazy!

No, because of the narrator.

Would you recommend Murder Chronicles to your friends? Why or why not?

Who would you have cast as narrator instead of John Eastman?

Was Murder Chronicles worth the listening time?

Some of theses stories are so obscure and outdated. I tried skipping around to different stories, but the narrators voice is so grating, I couldn't stand another word. He screams out the words like he's working a carnival.