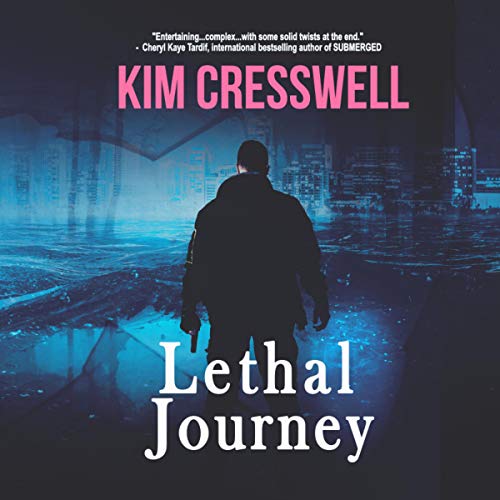 By: Kim Cresswell
Narrated by: Rebecca Hansen
Try for $0.00

A killer lurks in the shadows of Hyde Park, New York...waiting. Manhattan District Attorney, Lauren Taylor, is about to take on the most important case of her career, prosecuting Gino Valdina, acting mob boss of New York's most influential crime syndicate.

For three decades, Gino Valdina has led New York's Valdina crime family. Since his recent indictment for murder, the leadership of the family is in turmoil, appalled by the death of one of their own, Gino's wife, Madelina. Without the support of the family behind him, Valdina will do anything to save himself.

But Lauren soon discovers, things aren't always as they seem when she's tossed into a mystery, a deadly conspiracy that reaches far beyond the criminal underworld and a journey into the past makes her - and anyone she's ever loved - a target.

What listeners say about Lethal Journey

What an exciting thrilling ride full of surprises

This was a very surprising story with an ending that will blow your mind. No one seems to be innocent from friends of the family to business associates everyone seem guilty. The author puts so many twists and turns your head will spin as you try to work out who did it and who will be next on the killers list. The author gives you flash backs of Lauren that she would rather forget that pulls you in making your heart break for this family. There was death in her family at a very young age, she has lost so much and may lose more even her life before the killer is done.. The who and why will really bring home news in today’s headlines. The author gives you an action packed, intriguing, intense suspenseful mystery from the first page that keeps your heart beating overtime as she pulls you from one scene to the next keeping you so invested you forget you are listening.

Ms Hansen does a great job on this narration the only issues I saw was when she was speaking in her own voice she sounded like she was reading it, it wasn’t as smooth as the rest of the audio. The narrator’s voice is good, her character voices are outstanding really pulling you in with true emotions and excitement. There are no background noises or any places where the volume changes. I heard no repeat of words just a smooth exciting listen. If any breaks were taken I could not tell. Her many different character voices are outstanding you have no trouble knowing who is speaking or what emotion they are feeling. Her female voices were just as wonderful as her males. This is one narrator that can really pull off the emotion turmoil that the author wants you to feel giving you a highly entertaining listen as you are impacted by the facts of being hunted down as bullets fly around you. I had no trouble visually playing the scenes in my mind as the narrator unfolded them for me. Ms. Hansen’s really puts the excrement into the read grabbing your attention and holding it from the first page to the last making your heart beat faster as her tones match the action going on around you.

I really enjoyed this audio it has a great plot which at times has you one the edge and at other times blow my mind. There is a little romance from a man from Lauren past who she never got over. He takes keeping her safe seriously as things heat up between them it gets even hotter when the plot thickens as the author spins a tale of danger making the read keep guessing who wants her dead. Everything is pointing to Gino Valdina the head of the New York crime family whose wife was killed and is on trial for her murder. It goes much deeper than this when family and friends end up dead leaving Lauren at a lost. She is on a downward spin as friends look to be enemies.

Nick adds a lot to the story line as he does his best to keep Lauren safe. He has ghost of his own that has haunted him through time but seems to be getting his act together. Her father is a very strong man who has always been there for her always being her hero. I liked all these characters and supporting characters that give so much to the plot and adds lots of mystery. Although this is somewhat a romance the story is based more of mystery, thriller and suspense. It is a very entertaining story that will keep you on the edge time and again. The ending did cross my mind at one point but I wasn’t sure it still have a very big impacted. If you are looking for a short read or listen that keeps you invest this is the one for you with thrills and action from start to finish. It is short and to the point with no fillers, each word has a part to play in this outstanding suspenseful read with an author that knows how to keep you spellbound from her very talented writing style.

These romantic thrillers are addictive!

ADA Lauren Taylor is trying to succeed where her dad, District Attorney, hadn't many years ago...put mob boss Gino Valdina behind bars for good. However, after being run off the road, Lauren realizes that she may be up against more than the mob thugs...think dirty cops and others. Enter former flame, and homicide detective, Eric! The pair try to put past differences aside and work together to keep Lauren safe and find out who's behind the attacks on her and her father. When the dust finally settles, will Lauren bring the bad guys to justice or will she become yet another victim? Another past paced read/listen...There is a HUGE surprise at the end!!! Never saw it coming...
I voluntarily accepted a complimentary copy of this book in exchange for an unbiased review.

I was voluntarily provided this free review copy audiobook by the author, narrator, or publisher. The plot here was good. I didn't figure out who the killer was so that impressed me. There were some unexpected twists and the story held my attention throughout the entire thing. I enjoyed listening to this book.

Ended with a Nice Twist

Well, I did not see that coming. Ended well, and backed up with lots of suspense and sexual tension. This book is the perfect length for a single sit listen or a long car ride. I would definitely give a listen to a follow up effort. Thank you Kim Cresswell and Rebecca Hansen for providing welcome entertainment with this free copy of Lethal Journey in exchange for this review.

Watch out for the Twists

Lauren Taylor, Manhattan D.A., has lost everything. Prosecuting Gino Valdina has cost her everything she has held dear. Gino will do anything to save himself and so will Lauren, and Lauren is about to find out things are even more crazy than she thought, but she will find help in unexpected places.

This was a great action filled, suspenseful story. I love Ms. Cresswell's writing and have read/listened to many of her other books and enjoyed every one of them. I always feel as though I am part of the story, like I am right there with the person this time with Lauren, cheering and crying with her. I love the surprise twists they keep me on my toes. I had the audio narrated by Rebecca Hansen who has a way of differentiating the characters to make each one very different and stand out.

A Lot of Action but a Questionable Story Line

Right from the start the story action begins. A District Attorney who is trying to prosecute a Organized Crime figure that had been the nemesis of her father when he was the prosecutor. But the story keeps taking unlikely turns. Great action story and entertainment. Just ignore the rest.

I enjoyed the book from beginning to end. The character development was reasonably good and the plot was well done, and seemed realistic. I had some misgivings about the narrator but I got over them. I never saw the end plot coming so did enjoy it throughout.