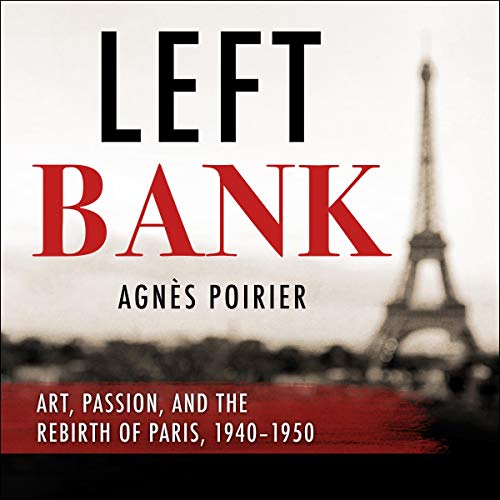 By: Agnes Poirier
Narrated by: Christa Lewis
Try for $0.00

In this fascinating tour of a celebrated city during one of its most trying, significant, and ultimately triumphant eras, Agnes Poirier unspools the stories of the poets, writers, painters, and philosophers whose lives collided to extraordinary effect between 1940 and 1950. She gives us the human drama behind some of the most celebrated works of the 20th century, along with the origin stories of now legendary movements, from Existentialism to the Theatre of the Absurd, New Journalism, bebop, and French feminism.

We follow Arthur Koestler and Norman Mailer as young men, peek inside Picasso's studio, and trail the twists of Camus's, Sartre's, and Beauvoir's epic love stories. We witness the births and deaths of newspapers and literary journals and peer through keyholes to see the first kisses and last nights of many ill-advised bedfellows. At every turn, Poirier deftly hones in on the most compelling and colorful history. She brings to life the flawed, visionary Parisians who fell in love and out of it, who infuriated and inspired one another, all while reconfiguring the world's political, intellectual, and creative landscapes. With its balance of clear-eyed historical narrative and irresistible anecdotal charm, Left Bank transports listeners to a Paris teeming with passion, drama, and life.

What listeners say about Left Bank

Very well written and the narration was wonderful and this book made really history come alive.

Wonderfully written, professionally read. The verbal performance did not get in the way of the narrative, a gift. The reader's French pronunciations hit just the right note. I learned so much about not just the Left Bank, but also about WWII in Paris and the struggles to keep communism (and capitalism, to a lesser extent) from dominating France and Western Europe. Highly recommended.