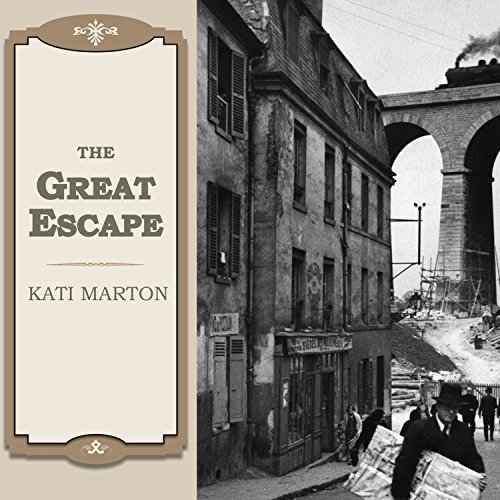 By: Kati Marton
Narrated by: Anna Fields
Try for $0.00

The stunning story of the breathtaking journey of nine extraordinary men from Budapest to the New World, what they experienced along their dangerous route, and how they changed America and the world.

In a style both personal and historically groundbreaking, acclaimed author Kati Marton (born in Budapest) tells the tale of their youth in Budapest's Golden Age of the early 20th century, their flight, and their lives of extraordinary accomplishment, danger, glamour, and poignancy.

Marton follows these nine over the decades as they flee fascism and anti-Semitism, seek sanctuary in America and England, and set out to make their mark. The scientists Leo Szilard, Edward Teller, and Eugene Wigner enlist Albert Einstein to get Franklin Roosevelt to initiate the development of the atomic bomb. Along with John von Neuman, who pioneers the computer, they succeed in achieving that goal before Nazi Germany, ending the Second World War, and opening a new age.

Arthur Koestler writes the most important anti-Communist novel of the century, Darkness at Noon. Robert Capa is the first photographer ashore on D-Day. He virtually invents photojournalism and gives us some of the century's most enduring records of modern warfare.

Andre Kertesz pioneers modern photojournalism, and Alexander Korda, who makes propaganda films for Churchill, leaves the stark portrait of a post war Europe with The Third Man, as his fellow filmmaker, Michael Curtiz, leaves us the immortal Casablanca, a call to arms and the most famous romantic film of all time.

Marton brings passion and breadth to these dramatic lives as they help invent the 20th century.

What listeners say about The Great Escape

Very interesting stories of how Budapest shaped the shapers of major twentieth century events. The narrative holds your interest throughout; the way Leo Szillard stimulated the development of the Manhattan project really shows how one person can change history

The anecdotes and insights alone make this book fascinating. Its originality lies in telling these unusual men's stories in the context of being Hungarian Jews in the first half of the 20th Century, of being on the front lines during times of great change in several fields. Very engaging even when talking about nuclear physics! An intriguing introduction to these men.

Kati Marton weaves several interesting stories about refugees from the assimilated, highly-cultured jewish community of Hungary (and, prior to that, part of the much larger Austro-Hungarian Empire) during the 1930s. She does an excellent job highlighting how these refugees had a profound impact on US culture, in the arts, science, atomic development and elsewhere, that is typically overlooked in histories of the period. As Americans, we are as self-centered in our thinking of how we "came to be" as any culture, perhaps more so. Marton's work helps to disabuse us of the notion that everything is homegrown. While at the same time showing that human migrations are a critical way that intellectual power moves from one culture to another. Marton does this by interleaving 6-8 mini-biographies in her story. This makes the work much more interesting than just a dry recounting of cultural exchange. I think Marton is less successful in articulating why this particular link, between jewish hungarians, the 1930s, the coming of the Nazi's, and the US, was completely unique. Similar migrations have occurred throughout history and even during the 1930s from other European states afflicted with fascism, or potents of fascism.

The narration is excellent. The book moves along at a good clip without boring the reader.

Good book for anyone, and especially if one has an interest in Jewish heritage.

The only drawbacks is that this is definitely a book that would be better read than listened to. Character and scenario changes are too abrupt for audio, but probably not so for the written word.
Also, the author doesn't treat all of her subjects with an equal hand. Her sympathies lie with sociopathic Left wing pacifists, alcoholics, and womanizers whereas Teller is gloomy and controversial despite his possessing those character traits which normal people would much rather associate with personally.