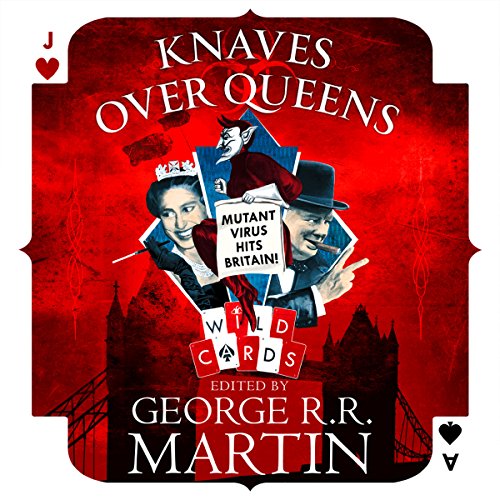 The return of the famous shared-world superhero books created and edited by George R. R. Martin, author of A Song of Ice and Fire.

For decades, George R. R. Martin - best-selling author of A Song of Ice and Fire - has collaborated with an ever-shifting ensemble of science fiction and fantasy icons to create the amazing Wild Cards universe.

In the aftermath of World War II, the Earth’s population was devastated by a terrifying alien virus. Those who survived were changed forever. Some, known as Jokers, were cursed with bizarre mental and physical deformities; others, granted superhuman abilities, are known as Aces. Now the virus has reached Britain....

Queen Margaret rules over a country in which such legendary figures as Herne the Hunter, Spring-heeled Jack and Babh, the goddess of war, roam at will. Her Prime Minister, Sir Winston Churchill - gifted with extraordinary longevity - together with the Enigma ace - Alan Turing - set up a special organisation named the Order of the Silver Helix. They will need all the wild cards they can find if they are to deal with the terrifying mutations thrown up by the virus.

What listeners say about Knaves over Queens

I think you won't regret picking this up

The best way for me to describe the experience of reading this collection was with this anecdote. When out for a meal with colleagues and friends; we were ordering desserts but we couldn’t decide what we wanted, so we pretty much ordered many different cakes. We kept passing the different cakes around where each person cut a piece, after that they would pass it along to the next. We called it the cake roulette.
This is what reading Knaves over Queens brought to mind. Each short story and novella had its own flavour, was for its own reasons exciting and added to that the various cameos of characters from one story to another made them fun to look forward to. The characters were interesting and there was an element of progression all through out. The historical elements added that extra bit of authenticity and gritty reality. From the second world war and Churchill, Turing, to the Cray twins, Thatcher and the Falklands war, the troubles and the more recent Brexit.

Peter Noble’s superb narration matched the gritty tone throughout. He made all the characters distinct to the point where I could tell who was who without hearing having to hear their names.

And in case you are wondering, as far as continuity goes, you don’t have to start from the first book to enjoy and fully appreciate this one.

my favourite wild cards to date!

such a good listen and can't wait till the next one really recommend this audible!

The reason I didn't give this 5 over all was because the story's don't quite connect with the others in this book. But the story's on there own are amazing, if you have never read any other wildcard books it would be a great introduction. Would recommend this book to anyone who likes action, adventure or just a little bit of a mystery.

I wasn't looking forward to this to be honest, wild cards without the established characters but it soon took on comfortable familiarity with a British twist