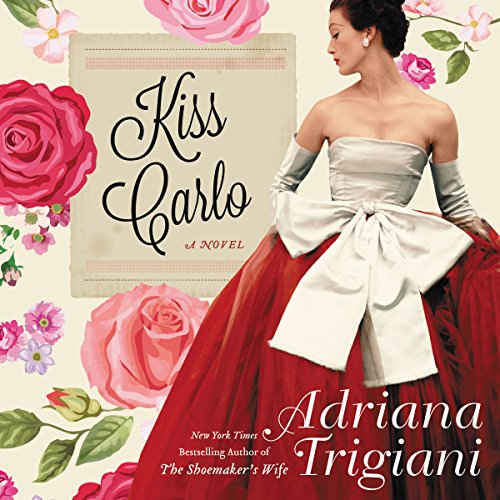 By: Adriana Trigiani
Narrated by: Edoardo Ballerini
Try for $0.00

From Adriana Trigiani, the beloved New York Times best-selling author of The Shoemaker's Wife, comes an exhilarating epic novel of love, loyalty, and creativity - the story of an Italian American family on the cusp of change.

It's 1949, and South Philadelphia bursts with opportunity during the postwar boom. The Palazzini Cab Company & Western Union Telegraph Office, owned and operated by Dominic Palazzini and his three sons, is flourishing: Business is good, and they're surrounded by sympathetic wives and daughters-in-law, with grandchildren on the way. But a decades-long feud that split Dominic and his brother, Mike, and their once-close families sets the stage for a rematch.

Amidst the hoopla, the arrival of an urgent telegram from Italy upends the life of Nicky Castone (Dominic and his wife's orphaned nephew), who lives and works with his uncle Dom and his family. Nicky decides, at 30, that he wants more - more than just a job driving car number four and more than his longtime fiancée, Peachy DePino, a bookkeeper, can offer. When he admits to his fiancée that he's been secretly moonlighting at the local Shakespeare theater company, Nicky finds himself drawn to the stage, its colorful players, and the determined Calla Borelli, who inherited the enterprise from her father, Nicky must choose between the conventional life his family expects of him and charting a new course and risking losing everything he cherishes.

From the dreamy mountaintop village of Roseto Valfortore in Italy to the vibrant streets of South Philly to the close-knit enclave of Roseto, Pennsylvania, to New York City during the birth of the golden age of television, Kiss Carlo is a powerful intergenerational story that celebrates the ties that bind while staying true to oneself when all hope seems lost. Told against the backdrop of some of Shakespeare's greatest comedies, this novel brims with romance as long-buried secrets are revealed, mistaken identities are unmasked, scores are settled, broken hearts are mended, and true love reigns. Trigiani's consummate storytelling skill and her trademark wit, along with a dazzling cast of characters, will enthrall listeners. Once again the author has returned to her own family garden to create an unforgettable feast. Kiss Carlo is a jubilee, resplendent with hope, love, and the abiding power of la famiglia.

"[Narrator Edoardo] Ballerini's range of voices and accents distinguishes the characters and gives personality to both males and females. His delivery deepens the listener's connection to the plot... Ballerini's enthusiasm for the audiobook is contagious..." ( AudioFile)

What listeners say about Kiss Carlo

Where does Kiss Carlo rank among all the audiobooks you’ve listened to so far?

What can I say? The story is deep, true, sometimes a bit wordy, but in the end a beautiful story and I love the narrator. I believe if I had read this on my own I may not have fully understood all the details as I tend to skim. I was totally wrapped into this story. I listen when I run and there were at least 5 times I heard a line and I thought "must remember that". Parts of the story are predictable but the journey was the best part. this book / story will stay with me for a very long time. Highly recommend!

What does Edoardo Ballerini bring to the story that you wouldn’t experience if you just read the book?

The combination of Adriana writing and Edoardo reading is enough to put me in heaven for as many hours as it takes to listen. I absolutely loved the first half of this book, it was funny, entertaining and realistic.Then it started going in too many directions and of course they all had happy endings. I am a fan of happy endings, but these were beyond contrived! I think the book would have been better with less subplots and maybe she could have made this into a trilogy. That said, I still enjoyed my time in the world that Adriana creates and she still remains a favorite author. And how nice it would be to meet Edoardo and have him read to me personally :)

LOVED !!!! My heart wants to listen to this book over and over . Bravo 🎊
Beautifully written and great performance. I highly recommend for all.

This book has many wonderful layers! The characters are very well developed with lots of charm & depth. The narrator was fantastic! He speaks Italian beautifully & he switches character roles so seamlessly that it sounds like several narrators are involved. Don't miss this gem!

Really loved it. I hadn't read this author before and was not disappointed. loved dividing the story in to the 3 acts.

I grew up in Roseto PA and have many ancestors from Roseto Valfortore. Reading this was like going home in every sense of the word!

A return to the familiar

I loved this author’s earlier books, before she tackled “heavier” topics. I think she shines in her portraits of more ordinary folk in or about the 1950s, and Kiss Carlo is one of those. I like to listen to books more than once (I tend to get distracted first time around). This one gets better with successive reading. Maybe because we already “know” the characters. Narrator was excellent.

Although not Italian background, I loved the seriousness, playfulness and overall structure of an immigrant Italian family to the US. Characters were fun, story very nice and loved the ending. Have to find more!

If you're like me you can't get enough of Adriana Trigiani's novels, so when I heard this one was coming I was excited! After listening to it on Audible, I was not disappointed. A story of family, of pursuing dreams, of perseverance, of love. Another winner in my book! Thank you AT! -Dana B.

A must read book! I enjoyed every second of it! Narrator was very good too.