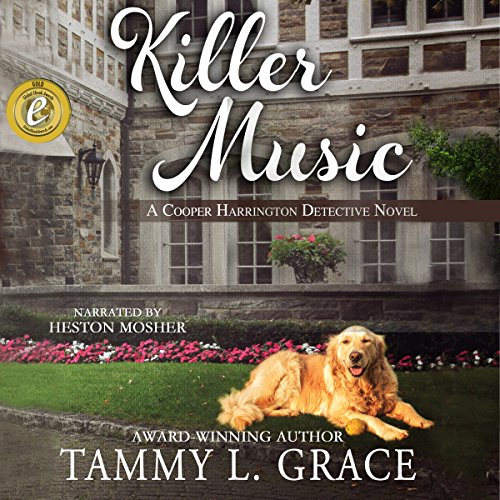 When private detective Cooper "Coop" Harrington meets record label mogul Grayson Taylor at a swank gathering of country music artists and politicians, he never imagines he'll be investigating his brutal murder less than 24 hours later. The suspects are plentiful. More than a handful of people could have wanted him dead. Retained by Taylor's widow, Coop works alongside his best friend and Chief of Detectives, Ben Mason.

The investigation leads Coop and Ben to visit the luxurious mansions of recording industry magnates, navigate the murky undercurrents of the political world, and probe complicated family matters. Scandalous indiscretions, secrets, and hints of corruption swirl in the midst of their pursuit of the killer.

Coop's faithful friend and assistant, Annabelle, and his loyal golden retriever, Gus, both lend a hand during the investigation. Even his Aunt Camille mines the local gossip mill to unearth potential killers with motive. Yet the case seems hopeless until a crucial piece of evidence emerges that sends Coop and Ben on a race to catch the killer before someone else dies.

What listeners say about Killer Music

The excellent narrator enhances this fast-paced, smart tale of corruption and murder. Coop is a compelling protagonist that you root for and is surrounded by a likeable cast of characters, Add in an adorable dog and you've got icing on the cake. The dialogue jumps from the page and the behind-the-scenes look at a state legislature supplies intriguing detail. I'm ready for the next books in the series. I'm glad Ms. Grace is a prolific author.

Loved the Story and the characters

I enjoyed listening to this audiobook, Killer Music. This is the first book in the Cooper Harrington Detective Series of crime mysteries. He is my type of unique detective with just enough southern charm, a golden retriever (I love golden retrievers) and looking out the the good people in the middle of all the high society people. The characters blend very well all through this story.

Great mystery that keeps your attention until the end. It’s impossible to stop listening until you’re finished. Easy to listen and understand. Another great in this series.

I enjoyed this book, there were so many suspects that I didn't guess who the killer was, not that the victim was a bad guy but when the murder happens at a party for musicians and politicians the suspects pool is huge and with no motive the case seems impossible.

The nice thing about this story was the p.i worked hand in hand with the police and there was no competition or grand standing as to who was top dog and running the case, and with a fun supporting cast to help from assistants, to aunts it was a nice easy listen.
The narrator was very good and used a variety of tones to portray the characters.