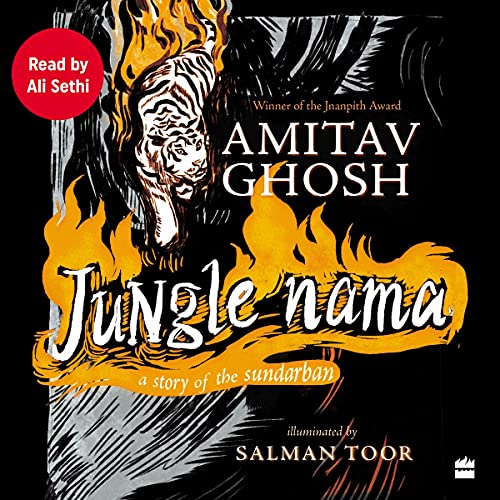 Jungle Nama is Amitav Ghosh's verse adaptation of an episode from the legend of Bon Bibi, a tale popular in the villages of the Sundarban, which also lies at the heart of the novel The Hungry Tide. It is the story of the avaricious rich merchant Dhona, the poor lad Dukhey, and his mother; it is also the story of Dokkhin Rai, a mighty spirit who appears to humans as a tiger, of Bon Bibi, the benign goddess of the forest, and her warrior brother, Shah Jongoli.

The original print version of this legend, dating back to the 19th century, is composed in a Bengali verse meter known as dwipodi poyar. Jungle Nama is a free adaptation of the legend, told entirely in a poyar-like meter of 24 syllable couplets that replicate the cadence of the original.

The first-ever book-in-verse by Amitav Ghosh, Jungle Nama evokes the wonder of the Sundarban through its poetry. This is an audio edition of a fabulous folk tale that every book lover will want to possess.

What listeners say about Jungle Nama