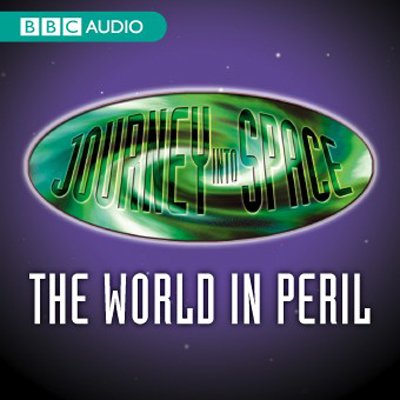 Charles Chilton's classic science-fiction trilogy stormed the BBC airwaves during the 1950s. Its gripping story lines, extra-terrestrial sound effects, and atmospheric music engaged the listener as never before. Between 1953 and 1958, a devoted audience of adults and children attentively followed Captain Jet Morgan and his crew from one cliff-hanger to another as, together, they faced the unknown perils of space.

In this epic concluding series, Captain Jet Morgan, Doc Matthews, engineer Mitch Mitchell, and radio operator Lemmy Barnet once more set out for Mars, but this time alone. Their orders: to discover all they can about the threatened Martian invasion of Britain. Jet and his comrades are stretched to their limits as they taken on the awesome Martian power. When they learn the astounding secret of the invasion plan, there is a race against time to warn a defenceless Earth. This is the complete The World in Peril series.

"Journey Into Space" is by far one of the most exciting series amongst all of those old classic radio dramas. This is the 2nd story-line in its long serial of programs. If you are a fan of audio books or radio dramas of any kind, you will most surely enjoy "Journey Into Space". It is a shame that this medium is not as popular as it once was but it's great that you can still enjoy these old shows with the help of the internet.

What made the experience of listening to Journey into Space the most enjoyable?

Adventure stories with a science theme are rare today, this is one of the best, it stands the test of time and the Characters are well played

The Martian, principled and ethical

A BBC Radio Show. Lots of fun from the era!

This is a radio show from the BBC. 20 shows each an 1/2 hour. The sound effects and dialogue show the era - and it was great fun. This was recorded in the days when TV was just about replacing Radio Shows.

But that increased the enjoyment of listening. Hard to believe that at certain times of the week, people stopped everything to listen to a show. Now with DVR and the ability to record and control live TV, we forget what had to be done each week to keep the show going.

For the small price, it was well worth it.

Journey into Space is a true legend of radio sci-fi. More intelligent than most of the US offerings of the time, it was the perfect alternate to TV's Quatermass (Parts of JiS in total darkness were allegedly written in response to Nigel Kneale's argument that 'TV could do anything better than radio'!). The pace is different to modern-day offerings and the science sometimes a little daft, but overall the trilogy is wonderful listening; I have shared Jet, Lemmy, Doc and Mitch's adventures several times now, and still don't tire of them.
To pick up on a previous reviewer, these are restored episodes from the original transcription discs. The first series (Operation Luna) was not retained on original broadcast and was re-recorded in 1957, tightening up much of the early plot (by the writer, who CHOSE to re-write it) and by necessity re-casting some of the roles. However, the second and third series (Red Planet and World in Peril) ARE the originals, at least what was kept of them at the time. The full story of the re-recording, loss and recovery of these episodes can be read in the accompanying booklets.
These are well worth buying, but be aware the audio quality is not perfect, particularly due to Audible's compression, it is only a shame that the BBC flatly refuse to issue the third series on CD.

A fantastic series that never fails to capture me no mater how many times I hear it.

Just one problem the second series 'The red plant' is not available with audible but the third series 'World in peril' is. You have to buy the CD set for series 2 from amazon. Madness!!

love the journey into space programs! all of them are well put together! jet and the doc play there parts really good

Retro flavoured fun but no classic

The 3rd Journery into Space radio series by Charles Chilton is a lot of things: fun, stupid, full of cheesey cliff hangers, charming in it's way, excellent value for money and repeated on BBC 7 practically every year.
This series is a direct sequel to the 'Red Planet' which you should listen to before you download this one as it starts with more of bang and serves as a better introduction to the reocurring characters and recycled plots. If you think I'm being hard on the series let me say that I am a big fan, but part of the charm is the sillyness of it. At times this is more of a space pantomine then a space opera, but it's always played straight. Annoiyingly, this version of the series is not the original but a remake with different (and hugely inferior) actors playing two of the best characters. This kind of thing is typical of the BBC's infamous archiving policy decisions!
Check out the audio sample to see what you make of the style of the show. If you think you could enjoy 10 hours of this stuff you will have a great time with this download.

An amusing BBC drama set in the "future" of 1972!
Slightly quirky, but amusing
An easy listen on a long drive

Enjoyed the whole story. I do hope there is more in the series. It transported me back to the days when we gathered around the radio to listen to Journey Into Space. With audio on iPads and earphones able to take the story wherever I go...to the moon and beyond!! Excellent entertainment.

Brought baxk memories of Sunday nights listening to the radio with my family. Super quality.

Before Dr Who there was Journey into Space

It's a page turner

I have listened to it a few times now. I never get tired of it.

Love Charles Chilton's Journey into Space stories....😁😎. Renee listening to it on "Wireless". back in the day