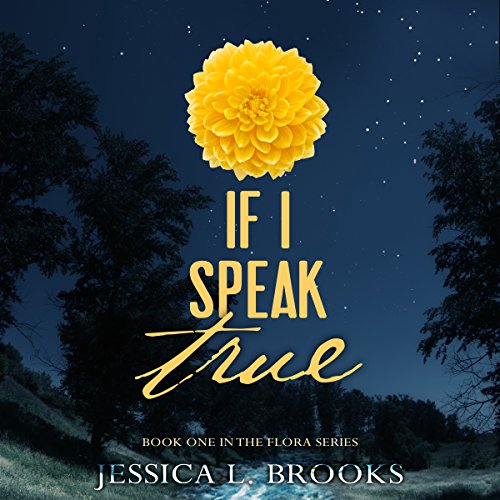 If I Speak True

If I Speak True

Dahlia Kennedy's 16th birthday marks a decade of mysterious dahlias arriving and strange, lonely dreams of being in a forest. The only difference of this birthday, however, is that for the first time, someone is there with her. And he's practically from a whole other era.

The more often Dahlia visits Rowan in his land of Ambrosia, the stronger their connection grows. But is Ambrosia real? Is he real? What's going on between the two of them, exactly, and why does he insist that she keep it to herself?

As secrets usually go, it's only a matter of time before everything comes out. When Dahlia finds out the truth of who Rowan is, who she is, and how he really feels, it's beyond anything she could have ever imagined.

An Atmospheric YA Contemporary Fantasy

CHARACTERS:
Dahlia: She seems like someone I would have enjoyed hanging out with in high school. Bookish, with just a few close friends.

Rowan: I like that he is careful about proprieties and mindful of the age difference. So many YA heroes aren’t anyone I would want my daughter (if I had one) to be interested in. BUT, his constant mysteriousness was very frustrating (although we learn the reasons for it later on).

Dahlia & Rowan: The main thing that kept this from being a 4* book was that there was too much “tell” and not enough “show” for their relationship. We are basically “told” that it is developing over time, as they meet & have great conversations; but we rarely get to “hear” those conversations for ourselves. We get lots of dialogue in the scenes with David, but skip over all but a few highlights of Dahlia & Rowan’s courtship. I would have like to spend more time with them, as they were getting to know one another. It might also have helped balance out the fact that he was careful to never talk about anything significant in his own life.

Dahlia & David: Oh man, I feel for you Dahlia. I have been in your exact situation with a long time friend, and it isn’t any fun. / I appreciate that she compares David liking her to her liking Rowan, and is able to be compassionate.

WORLDBUILDING:
Her descriptions are especially good. Listen carefully when she first explains her "dreams." It is a verbal "map" to the land. I want to visit the beach, especially at night; a gorgeous guy as a companion would be plus too.

STORY:
As I said above, I found the extended "mysteriousness" of everything a bit frustrating. Once things started being explained, the story really got going and became more action packed. I think we could have gotten to the action sooner if we had spent less time in the daytime world. The ending definitely leaves everything hanging. (I don't want to say a lot more, lest I ruin the mystery)

NARRATION:
Note: there are some volume changes (e.g. when a character shrieks)
Pros: Her voice was very age appropriate / Good emoting w/o being overdramatic / Good speed. I actually listened on regular speed, rather than my usual 1.25.
Cons: Rowan’s voice took a little while to get into. / There may have been a point at which the wrong last name was used for Dahlia (I noted it, but forgot to record the time point, so I couldn’t recheck it).

HIGHLIGHTS(S): Dahlia works at a book store. / Scene in the snow / Scene with the stars & pillows / Peanuts, The Princess Bride, Ever After and other great cultural references. / The fact that her first crush, the jock, isn’t also a jerk.

I COULD HAVE DONE WITHOUT: Love triangle (although I understand the parallels that are being drawn)

I received this book free in return for an honest review, courtesy of Audiobook Blast dot com.

This may have been a young adult read, but it really can be for all ages. This storyline was the kind that grabs you & doesn't let go. You have to find out what's going to happen next and about Dahlia's family and the history of them all. The normal struggles all teens go through are addressed too. I can't wait to listen to more of this series.

What made the experience of listening to If I Speak True the most enjoyable?

This story shows the pressures of high school while the love of a 16 year old is time traveling.

Loved the speaker except for the voices of the "uppers" found that a little harshly read.

Was moved when the Mother was doing a good job of setting rules down for her teenagers.

I had to think for a little bit before reviewing this book, because I think listening to the audiobook may have influenced my opinion.

Let's start with the good: There are two stories within this book - Dahlia's home and her dream world. The dream world was by far the more interesting, both for plotting, pacing and in characters. The political intrigue and mystery captured my attention and I found myself willing the story to go back to that world. The romance was interesting too, though I found myself wanting a better connection between the two love interests, the the whole "warm feeling" was interesting. When Dahlia finally finds the mysterious diary and house, the book's plot seemed to really take off.

The other world, however, was tedious. There was a lot of talk about a prom the main character never even goes to, an intense boy crush that doesn't seem to fit with the character or go anywhere, and a couple of best friends who don't really contribute much to the overall plot - instead they cause a lot of whining from Dahlia. I found myself wondering why anyone would be that interested in Dahlia's dreams that she fought so forcefully to hide.

But the thing that really made me wonder if it was the audiobook version messing with me was that the main character was so whiny and petulant and often difficult to like. She's constantly hitting people, even the guy she has a crush on, and running away as soon as she gets mad about something. I mean I know teenagers are kind of like little kids that way sometimes, but it grated on my nerves a bit.

The narrator overall did a good job - great voice changes, but she definitely played up the whininess and when she made a character scream of yell, it made me cringe.

Overall, an ok young adult book that needed more time in its dream world and less time on the boring details of normal life that didn't really apply to the story.

"I was provided this audiobook at no charge by the author, publisher and/or narrator in exchange for an unbiased review via AudiobookBlast dot com.”

i really enjoyed this book

What did you love best about If I Speak True?

Dream worlds, a handsome stranger, and mystery. What could be better? I appreciated the creative plot and the fantasy. Really, a great mix.

It felt like I was listening to a teenaged girl talking to me on the phone for 12 hours telling me her story. It was hard to listen to the whiny teenaged girl parts, but maybe that means she nailed it. For a while I thought she was going to narrate the whole thing like a question, but she didn't. I just kept thinking that young females will love this.

I enjoy YA Fantasy and liked this storyline.

This was a good YA fantasy, and one I'd even let my 12 year old listen to. There's no bad language or sex, and the teens acted very much like teens. A sweet love story, a bit of mystery, and another world all combine to make this a fun listen!

Angel Clark did a GREAT job with the female teens voices, inflections and all.

I enjoyed this book very much! I have to be honest, if it had not been an audiobook, I do not know if I would have liked it as well. Angel Clark was the narrator for this book, and she was simply perfect! I would never have "heard" Dahlia's voice in my head as Angel used, and that would have made the book quite different for me.

The story is about a teenage girl who dreams of her own little oasis, somewhere she can relax and think. She only visits there in her dreams, because it only exists there. Then, one day everything changes when a boy named Rowen makes himself known.

Where it goes from there is truly engaging, and well written. Jessica Brooks can write! I am so grateful that Jessica gave me a copy to listen to and review, because I would never have found this book otherwise. Angel does the voice of a 16 year old girl and her friends perfectly. I wouldn't change a thing! Please, PLEASE have Angel narrate the next books in the series. I've got to know what happens next!

Disclosure: I received the audible copy in return for an honest review.

This book was not for me

Would you try another book from Jessica L. Brooks and/or Angel Clark?

I have mixed emotions about trying another book by this author. I would definitely not listen to another book by this narrator. Her performance of this book was very annoying. At times she was whiney, sounded like she was quoting from memory without emotion. I did not enjoy the narration. As for the author, there were times that she was too descriptive and I was like "come on now, get on with the story"

Would you recommend If I Speak True to your friends? Why or why not?

I would not recommend, however, I would tell them my opinion and advise to listen and decide for themselves if asked.

Who would you have cast as narrator instead of Angel Clark?

If you could play editor, what scene or scenes would you have cut from If I Speak True?

The over abundance of descriptions before getting to the point