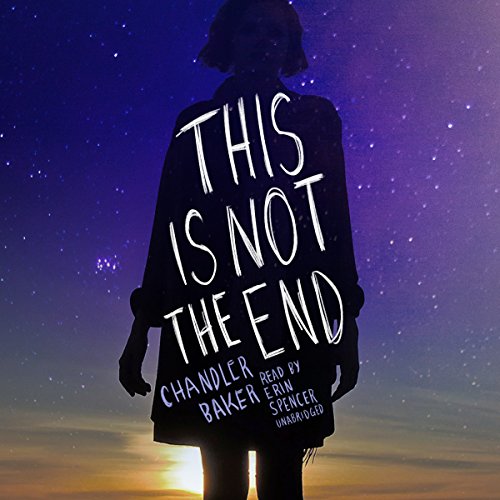 This Is Not the End

By: Chandler Baker
Narrated by: Erin Spencer
Try for $0.00

A teenage girl faces an impossible choice in this high-concept contemporary YA tearjerker set in a world where resurrection is possible but strictly controlled.

I wonder if for the rest of my life, I'll be haunted by beautiful days.

On one cloudless, radiant summer afternoon, Lake Devereaux lost everything. The car crash claimed the lives of her best friend and boyfriend, the people who had become her family after her own fell apart. But she doesn't have to lose them both.

The development of resurrection technology has changed the world. Under the new laws regulating the process, each person gets one resurrection to be used or forfeited on their 18th birthday. Mere weeks away from turning 18, Lake faces an impossible choice.

Envisioning life without one of the people she loves most is shattering enough, but Lake carries an additional burden: years ago, under family pressure, Lake secretly - and illegally - promised her resurrection to someone who isn't even dead yet.

The search for answers about her future draws Lake more deeply into the secrets of her past until she begins to question everything about those closest to her. Betrayals and hurts both new and old threaten to eclipse the memories she once cherished.

Then Lake meets a boy unlike anyone she's encountered before, who unflinchingly embraces the darkest parts of her life and who believes that all resurrections are wrong.

Which path is the right one? And how can Lake start to heal when she can't move on?

What listeners say about This Is Not the End

Pretty good world that is wrecked by repetitious descriptions of superficial physical appearance and a marked disdain for disabled people. The main character is an incredibly lucky character that is loved very much by her family and she treats them shabbily and decides to get a new family of friends from her school. Although the friends seem pretty shallow it’s really just her perception of them, we find out they’re actually pretty deep she’s just that self-centered that she doesn’t know or realize anyone else matters but her. She’s ungrateful for her family until it’s proven near the end that it’s actually her and not them that was mistreating the other. And then the book ends with a not great ending. Three stars it’s not great but it’s not terrible.

I absolutely loved it. the story, the idea, the tragedy. it was fantastic. I couldn't get enough.

Wow that was SAD

I didn’t like the end but otherwise I can’t complain. I feel like there should be a sequel, it just left me thinking WHAT that’s it!!!! If you like sad depressing stories this is a book for you. I hope teenagers in real life never have to face a choice like this.

The last 2 hours of this book kept me ON MY TOES, worth the read!

liked it, except for the ending.

The concept is very interesting, and I liked most of it. . . but I am really annoyed with the ending.

Very good story line, well written with a surprising twists! The characters are very relatable and the author was very descriptive!

This book ended with me in tears. I did not expect the ending or the truth that was revealed about her.

I really enjoyed the story overall, but the ending was lacking. I got lost in the world of Lake, her friends, and her family, and I liked the little twists along the way. The ending wasn’t what I expected and it left me feeling unsatisfied. I actually said, “What?!” very loudly when the story concluded and scared my sleeping cat!

I got this one because it claimed to be a tearjerker, but I did not feel like crying at all during this book (and I cry at everything). However it was a pretty good story. It definitely is meant a lot more for teens as the romance and some of the things they say are just really awkward and they are praised as being sweet. For example, when she meets Ringo in the therapist office and he tells he what she is going through really sucks, I couldn't help but cringe at all of the analogies and awkward phrases. Now don't get me wrong 15 year old me would have loved this book, but now that I have grown up and understand love and life a little better, I just did not enjoy this book. I did not really feel attached to any of the side characters, except her brother, and her treatment of him was really quite awful. I mean of course he is going to be angry he had an accident that made him a quadriplegic she could have at least had a little compassion.

I liked the story but there was no emotion behind it. It was just off. Not a realistic presentation of what a situation like this would FEEL LIKE to most people. I’m listening to the story wondering why the main character doesn’t have any real feelings.