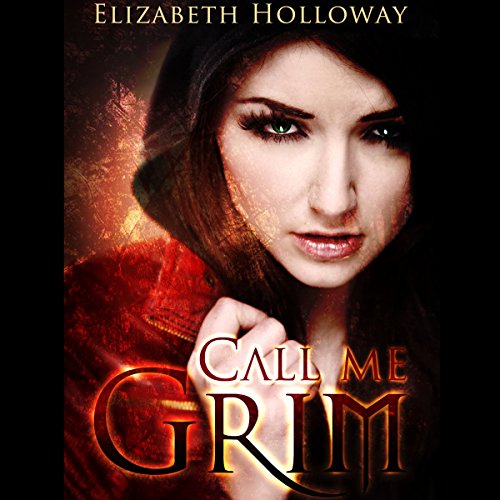 By: Elizabeth Holloway
Narrated by: Kelly Collins Lintz
Try for $0.00

The truck should have turned Libbi Piper into a Libbi Pancake - and it would have, too, if Aaron hadn't shown up and saved her life. The problem? Aaron's the local Grim Reaper - and he only saved Libbi's life because he needs someone to take over his job. Now, Libbi has two days to choose between dying like she was supposed to, or living a lonely life as Death Incarnate. Talk about a rock and a hard place.

And the choice goes from hard to sucktastic when her best friend shows up marked: condemned as a future murderer. Libbi could have an extra week to stop the murder and fix the mark - but only if she accepts Aaron's job as Reaper, trapping herself in her crappy town forever, invisible and inaudible to everyone except the newly dead. But, if she refuses? Her best friend is headed straight for Hell.

What listeners say about Call Me Grim

A fun and captivating read.

What drew me to this at first was the awesome cover, then when I read the blurb, well I knew I'd read it!! Even better though, I got the chance to listen to the audio of this instead of reading!

What would you do if faced with the choice of dying or becoming the local Grim Reaper? Well that's the choice Libby is given. She is supposed to die but someone saves her. It's the same guy she has been seeing around for the last few days. This boy tells her that she can either die or take over from him as Grim Reaper. He tells her that he has a job to do then he will die and she will be the Reaper.

It may seem an easy choice but could you live forever and see everyone you love die, with no way to help them. Could you live forever where no one can see you until they die? Libby doesn't think she can but when her BFF turns up with a tear in his soul, Libby has no choice but to accept and hopefully find some time to help him.

I loved Libby! She has such spunk and is a well rounded character. She was a no nonsense kind of girl. She is offered the choice to die or live forever and chooses to die, but when she see where her BFF is headed she immediately takes the offer and tries to do what she can to help. She is also so level headed, she doesn't just fall for the hot guy but thinks everything through.

Aaron is so mysterious and aloof at first but it's still hard not to like him. Finding out his story was heartbreaking!! I loved his loyalty too. He hates that he has to get someone else to take his job but he knows he doesn't have any other choice. I loved seeing Aaron and Libbys friendship grow.

Anyway, Call Me Grim was such an awesome read. It was a fun yet grim read. The choices we make can not only affect you but everyone else too. It was fascinating learning about the splits in the soul and how and why they were there :) I loved that spin on the Grim Reaper story, I also found it intriguing when Aaron was showing Libby how to take the soul and what happens at the gateway. This isn't just a story of the Grim Reaper, it's about loyalty, friendship, hard choices, right or wrong choices and consequences.

Overall, I loved Call Me Grim. Its such an intriguing and captivating read. From it's lovable characters to it's enthralling world, Call Me Grim is a must read. I can not wait to see what happens next!!

I listened to the audio of this and Kelly Collins Lintz did an amazing job. She really brought Libby to life and had her spunk and fun spirit down perfect. She delivered some of Libbys sassy lines perfectly. I will definitely check out more narrated by her.

This book was amazing with a great story I am lucky I found it and I enjoyed every word of it. This story engaged me from start to end.

Which character – as performed by Kelly Collins Lintz – was your favorite?

Kelly captures the sass and snark of a witty teenage girl by reading with a lightheartedness and playfulness to her voice. The pace is perfection - it helps lead me through the book...I don't feel like I'm listening - I feel like I'm there in the moment! Kelly has great character voices and inflections!

Great story with some cool unexpected twists! I love Kelly's narration - she filled this book with life and energy! I can't wait to listen to more of Kelly's audiobook narration!

Great read! What comes next?

This book was a pleasant surprise. I went into it thinking it would be an angsty YA read. There was a bit of angsty, but it fit into the story. Everything else about this book drew me in and kept me on edge the whole time.

The whole book comes from Libbi's POV, have sole control of the narrative it is important she is like-able. She is actually rather fabulous for a teen character. Thankfully, she is not boy obsessed like so many heroines in YA. She does have a bit of crushing going on, but it is not her whole world. I love her sass and snark. She is remarkably mature for a 16 year old.

I love the supporting characters as well. They are complex and yet simple at heart. Everyone in the story helps to draw you in and make you wish things could work out. It is difficult, especially when you know what Libbi faces. Fortunately, the story is beautifully crafted and flows, keeping the reader engaged the whole time.

I listened to the audiobook narrated by Kelly Collins Lintz, who was lovely. Her pace was spot on, moving with the story and keeping the action flowing. She has a wonderful youthful quality to her voice that fit the main character, while still keeping her mature. She has a real gift for adding the natural sass of a teenager into the read. I will definitely be looking for more of her work!

The end of this book leave you at a but of a cliff hanger. It is an unexpected turn of events and I have no idea where the story is headed from here. That is kind of refreshing. It is rare for an author to surprise me. I can not wait for the next book, really hope it will be in audio!

Where does Call Me Grim rank among all the audiobooks you’ve listened to so far?

I would say that Call Me Grim ranks amongst the top ten audiobooks I've purchased through audible. Not only is this a great YA thriller-type story with a well thought out plot and a relatable heroine but the quality of narration is excellent. Perfect for the story!

This is a difficult decision. But fitting for this title. Our heroine is faced with a HUGE decision to make, life as an invisible-to-all-living-persons grim reaper or death and condemning her best friend to hell along side her. This book is simply but elegantly written with loads of pager-turner scenes. So, I can't pick one as a "favorite", but I will say this... ALL of the characters are interesting and deep, and I'm not just talking about the two main characters, Libby and Aaron, but ALL of them. You feel like you know these people and thats what makes for great scenes, isn't it? Reliability, sympathy, compassion, and excitement for the characters! The narrator (Kelly Lintz) really breaths life into them all and puts your right there beside them. Great purchase.

Libbi Piper should have been hit by a truck ending her life but Aaron saved her life. Aaron died 40 years ago as a teen and is tired of his job as a Grim Reaper. Aaron needs someone to take his place and hes offered Libbi the job but she must decide quickly.

I was a little frustrated with Aaron and his lack of answers and if I was Libbi, would have kicked him to the curb for the lack of info on such a life altering decision.

Interesting little world that’s been built up. Interesting situation to be put in. But the world building only went half way, too many unanswered questions.

Have you listened to any of Kelly Collins Lintz’s other performances before? How does this one compare?

This was my first audiobook narrated by Kelly Collins LIntz, but I really enjoyed her. Her narration improved the story and made it more interesting. All of her characterizations were unique and distinct and her pacing and tone was appropriate. I'd definitely listen to her again.

Aaron's moment with his sister was touching and built the interesting backstory well and broke my heart a little bit.

I liked Libbi as a character right away. Her motivations are clear and interesting. The way Holloway writes teenagers is authentic and realistic. I look forward to more titles from Elizabeth Holloway.