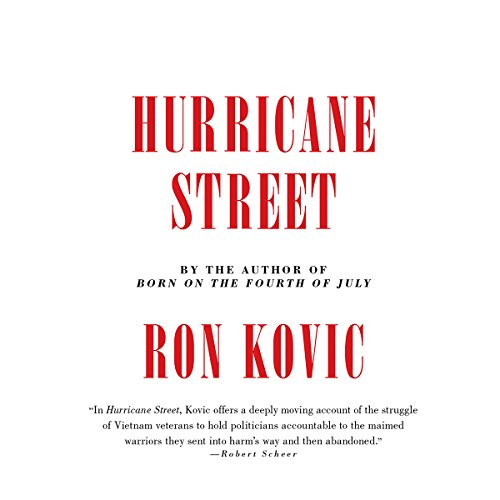 In the spring of 1974, as the last American troops were being pulled out of Vietnam, Ron Kovic and a small group of other severely injured veterans in a California VA hospital launched the American Veterans Movement. In a phenomenal feat of political organizing, Kovic corralled his fellow AVM members into staging a sit-in, and then a hunger strike, in the Los Angeles office of Senator Alan Cranston, demanding better treatment of injured and disabled veterans.

This was a short-lived and chaotic but ultimately successful movement to improve the deplorable conditions in VA hospitals across the country. Hurricane Street is their story - one that resonates deeply today - told by Kovic in the passionate and brutally honest style that led to over one million sales of Born on the Fourth of July.

"The author of Born on the Fourth of July (1976) recounts the brief 1974 movement he initiated to change how Veterans Affairs hospitals cared for wounded soldiers.... The great strength of this book is that the author never minces words. With devastating candor, he memorializes a short-lived but important movement and the men who made it happen. Sobering reflections on past treatment of America's injured war veterans." (Kirkus Reviews)
"[A] compelling snapshot of early 1980s activism.... Without social media or cell phones to boost the signal, it was Kovic's flair for the dramatic and ability to marshal reporters that turned the protest into a battle victory.... Kovic's updates on the fates of his fellow veterans provide a memorable and bittersweet conclusion." (Publishers Weekly)
"The author of the best seller Born on the Fourth of July writes an impassioned and timely memoir about the 1974 American Veterans Movement that will strike a chord with veterans and their families today." (Publishers Weekly)

Moral powerhouse Ron Kovic's story of his awakening to the power of activism as he and fellow patients reform the VA.

While recuperating in the Long Beach VA hospital after a devastating injury in Viet Nam, Kovic's experience is Heronymous Bosch meets "One Flew Over the Cuckoo's Nest." He stages a hunger strike and grabs the media's attention with Jane Fonda, whose shock at the treatment of the veterans matches our own.

Dealing with anonymous death threats from his hospital bed he realizes, "How cruel these people can be." Then, as now the ones who insult soldiers while glorifying war are the ones who don't serve.

Kovic's urgent present-tense narration, performed by a pitch perfect Holter Graham put me firmly in his place with the depressing knowledge that Viet Nam was a lost cause ruining his life and those of his comrades. He wrote, "remembering stories is crucial to our survival" and this is a story I'll never forget.

This is a fine follow-up to Born on the Fourth of July. Ron Kovic writes simply and with great emotion, providing a snapshot of a brief moment when Vietnam veterans were able to change their situation through direct action. If the book is not as widely accessible as his first, that is no great fault--BOTFOJ is a classic.

The narration here is top-notch, among the best I've heard.