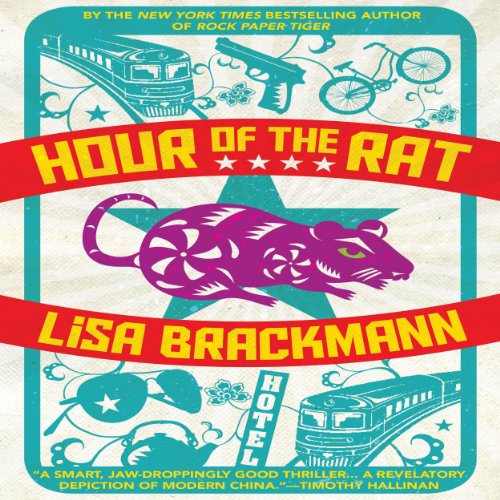 Hour of the Rat

By: Lisa Brackmann
Narrated by: Tracy Sallows
Try for $0.00

Iraq War vet Ellie McEnroe has a pretty good life in Beijing, representing the work of controversial dissident Chinese artist Zhang Jianli. Even though Zhang’s mysterious disappearance of over a year ago has her in the sights of the Chinese authorities. Even though her born-again mother has come for a visit and shows no signs of leaving. But when her mom takes up with "that nice Mr. Zhou next door", Ellie decides that it’s time to get out of town - given her mother’s past bad choices of men, no good can come of this.

An old Army buddy, Dog Turner, gives her the perfect excuse. His unstable brother, Jason, has disappeared in picturesque Yangshuo, a famous tourist destination, and though Ellie knows it’s a long shot, she agrees to try to find him. At worst, she figures she’ll have a few days of fun in some gorgeous scenery.

But her plans for a relaxing vacation are immediately complicated when her mother and the new boyfriend tag along. And as soon as she starts asking questions about the missing Jason, Ellie realizes that she’s stumbled into a dangerous conspiracy that may or may not involve a sinister biotech company, eco-terrorists, an art-obsessed Chinese billionaire, and lots of cats - one that will take her on a wild chase through some of China’s most beautiful - and most surreal - places.

What listeners say about Hour of the Rat

Get started on this series now

"Rock Paper Tiger" was an unexpectedly good debut novel, and made Lisa Brackmann a crime fiction writer to look out for. I said that if she continued writing about the adventures of Ellie McEnroe I would be down for that, and lo and behold, here is a second book about Ellie. And while Hour of the Rat wraps up tidily, there were enough character issues left unresolved that more books seem very likely.

This is good, since I've liked the first two a lot, though I do fear that the Ellie McEnroe series will go the way so many crime/mysteries series do, eventually laboring under the weight of so many continuing characters and long-running plot threads that each book winds up indistinct and episodic.

So far, though, the series is still fresh. Ellie McEnroe was a medic in the U.S. Army. She got a chunk blown out of her leg in Iraq, and now she has physical and psychological issues to deal with. She settled in China, originally because her then-husband brought her there when he got a job as a "security consultant." Now she's peripherally involved with the Chinese art scene, living as a semi-permanent expat and trying to stay out of trouble.

A buddy of hers from the "sandbox" asks her to find his brother, who's somewhere in China and apparently in some trouble. Reluctantly, Ellie agrees. The brother turns out to be accused of eco-terrorism, and Ellie's hunt will bring her to the attention of powerful multinational corporations, the Chinese secret service, and an eccentric art-collecting billionaire. As with the previous book, it means she spends a lot of time running scared and getting beaten up and not knowing who exactly is after her.

There isn't much to the "mystery" — what makes the book enjoyable is, of course, Ellie's outsider's view of China. This is a modern look at China, with its odd mix of authoritarian statism and hyper-capitalism, beautiful country villages and cities so polluted that the air is practically solid. A GMO seed company is the primary villain, but there is of course the ever-present though mostly easy to pretend-it-isn't-there surveillance by various organs of the Chinese government. The Chinese characters are often more cynical than Ellie is about their country, but they are as proud and as ambitious and as nationalistic as any Americans.

Also, Ellie's mother, who drove her crazy last book with a constant stream of Jesus-loves-you emails, comes to China for a visit. Lisa Brackmann understands the value of comic relief characters.

An altogether enjoyable read. For any fan of crime fiction or expat adventures, go ahead and get started on this series now — it's my hope that it will be around for a while.

Normally narration is either "good enough" (i.e. transparent) or "annoying" to me, but I want to call out Tracy Sallows's narration as being particularly good. Her voice for Ellie made me really believe it was the character speaking, her voicing of Ellie's mother made me laugh out loud, and she handled the Chinese characters, with their accents, very well also. She actually made the book more enjoyable.

This series is fantastic. While this particular story is more confusing than the first (Rock, Paper, Tiger), and less beatly resolved, the insughts into Chinese culture of the everyday variety, plus the glimpses of the life of a US army veteran, are complettly engaging. I really love the depth and complexity of Bravkman's characters, and can't wait to spend more time with them. The narration is slso outstanfing, accents and language tactfully and expressively rendered. Well worth a listen.

Great mystery and great writing. This is my first time listening to this author and I will differently be listening to another one .