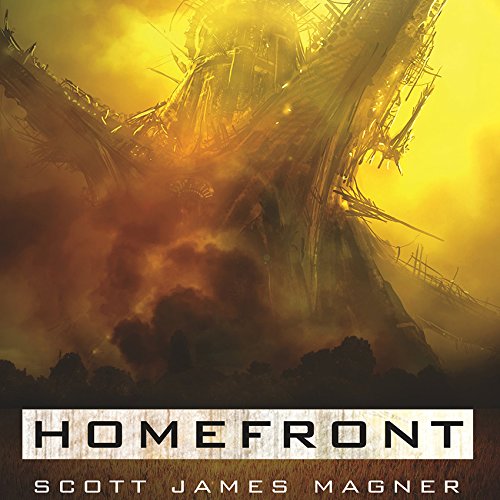 By: Scott James Magner
Narrated by: Allyson Johnson
Try for $0.00

Set against the backdrop of a far-future Earth struggling to reinvent itself after a technological disaster, Homefront is an uncompromising adventure story about what it truly means to be human.

Jantine is a Beta, a genetically modified super soldier charged with establishing a hidden colony on Earth. When her expedition arrives in the middle of a civil war, she must choose her allies wisely or be exterminated. Featuring complex characters and edge-of-your-seat action sequences, Homefront will have listeners guessing until the last tick.

What listeners say about Homefront

Science Fiction at it's finest!

One of my favorite books of 2014. It's rare that I read something that keeps me up all night to finish it. Homefront was such a book. It's full of original and exciting ideas, which is what defines Science Fiction for me. The interpersonal relationships between the various Transgenic castes were fascinating and the overall story was utterly riveting! Can't wait for book 2. Magner has nailed this!

This is a very character-centered story, relying less on dialog, plot or action to advance the story as it does internal monologue. It reminded a bit of Asimov in that regard. Be prepared for a highly psychological journey and character feelings as they regard other characters' feelings. I would also recommend a close reading of the early chapters where many of the characters are introduced in quick succession to prevent later confusion.

A better author could have made this concept into a truly epic book.

What was most disappointing about Scott James Magner’s story?

This book has very little action. The author endlessly focuses on the emotions of every character while neglecting clear explanations of what's actually happening. The world building was inadequate for giving the reader a good sense of why people behave the way they do.

I quickly grew to hate most of the female characters because of the narrator's high pitched vocalizations for them.

What character would you cut from Homefront?

I would cut EVERYTHING from Homefront except the basic concept. In particular, I thought the villain was the cheesiest and most cliché character I've ever encountered in a sci-fi book.

The only people who might enjoy this book are those who crave endless psychoanalysis of uninteresting, whiny characters and who aren't daunted by an incoherent plot.