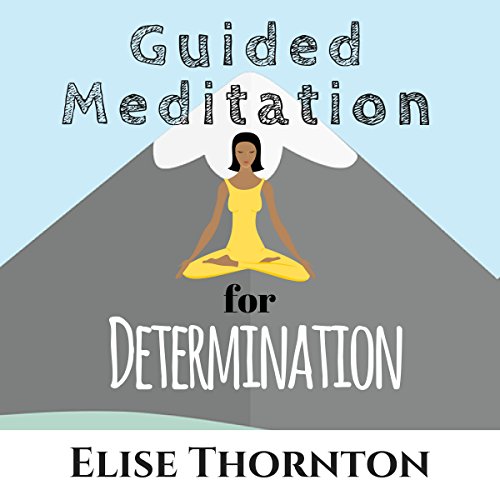 Guided Meditation for Determination was made to help people gain a clearer way to persistence. Gain the strength and push on to achieve your goals.

Wow! That was just what I needed!

This meditation was relaxing yet empowering! The sound of the narrator was gentle and soothing. That's important to me. I'll definitely be using it!

I would recommend this book to everyone, as it is a sure path to a state of inner peace and balance.

I loved the content, as well as the way it was read.

Have you listened to any of Sandra Murphy’s other performances before? How does this one compare?

Sandra Murphy puts more care into the books she reads than any other voiceover artist I have ever heard. She interprets the content of each book she reads most effectively.

I listened to this in one sitting and have listened to it again since. I will continue to listen to it, as each time I feel like I've just visited a five star resort for a week.

Thank you to Elise Thornton for writing this book and choosing Sandra Murphy to narrate it. Thank you Sandra Murphy for doing your usual, most outstanding work!

Would you try another book from Elise Thornton and/or Sandra Murphy?

What could Elise Thornton have done to make this a more enjoyable book for you?

I felt I should be concentrating more on positive thoughts and was confused sometimes when I was thinking of something positive and she told me to "let it go". I don't want to let the positive thoughts go... just the negative ones.

Her voice is very soothing and clear.

Would you try another book from Elise Thornton and/or Sandra Murphy?

I sampled other books by Elise already. I would definitely try another book from Sandra Murphy.

Would you ever listen to anything by Elise Thornton again?

I would listen and I have.

I liked the smoothness and the clarity of her voice. I appreciated the distinctness in Sandra Murphy's voice when she began the audiobook with instruction and then when she went into the actual meditation.

If you could play editor, what scene or scenes would you have cut from Guided Meditation for Determination?

I would take out descriptions like " breath out the BAD NASTY air!! I look for Positivity and Upliftment in a meditation. The previous phrase distracted me from the purpose of the meditation and made me think that I, or anyone listening, had BAD NASTY air in their bodies. I would definitely find another phrase such as, UNWANTED, STRESSFUL,etc. I would speak in the positive and not refer to the negative as, "BAD SCENT ENERGY" or instruct the listener NOT to open or go through a particular door. Say exactly what you want the listener TO DO instead of NOT DO!!

Many of Elise's books begin with the exact same exercise. If other exercises for relaxing the body could be explored, that would be great. Also, ambient music or sounds, such as ocean waves, during the meditation, would be a great way to help listeners focus.

I am a believer in meditation and the power we have within ourselves to become stronger and make positive changes within ourselves. I loved the images that the meditation created for me; but, it was easier to meditate through the images because of the voice of the narrator. Her voice was smooth and clear and effortless. The narrator allowed me to focus on the content of the meditation and not the voice itself. This will be a useful tool.