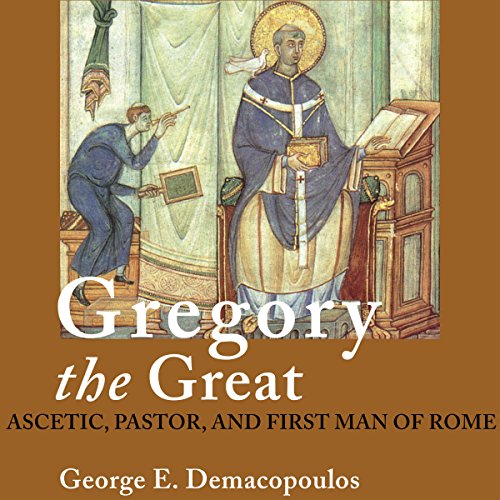 By: George E. Demacopoulos
Narrated by: Gordon Greenhill
Try for $0.00

Gregory the Great (bishop of Rome from 590 to 604) is one of the most significant figures in the history of Christianity. His theological works framed medieval Christian attitudes toward mysticism, exegesis, and the role of the saints in the life of the church. The scale of Gregory's administrative activity in both the ecclesial and civic affairs of Rome also helped to make possible the formation of the medieval papacy. Gregory disciplined malcontent clerics, negotiated with barbarian rulers, and oversaw the administration of massive estates that employed thousands of workers. Scholars have often been perplexed by the two sides of Gregory - the monkish theologian and the calculating administrator.

George E. Demacopoulos's study is the first to advance the argument that there is a clear connection between the pontiff's thought and his actions. By exploring unique aspects of Gregory's ascetic theology, wherein the summit of Christian perfection is viewed in terms of service to others, Demacopoulos argues that the very aspects of Gregory's theology that made him distinctive were precisely the factors that structured his responses to the practical crises of his day. With a comprehensive understanding of Christian history that resists the customary bifurcation between Christian East and Christian West, Demacopoulos situates Gregory within the broader movements of Christianity and the Roman world that characterize the shift from late antiquity to the early Middle Ages.

The book is published by University of Notre Dame Press.

"One puts this book down thinking about its subject in a new way, for Demacopoulos has been able to use the structure of Gregory's thought to make sense of its author." ( Marginalia)
"Demacopoulos writes an important account of Gregory the Great (540-604), an important figure in Church history who was by turns theologian, pope, mystic, liturgical reformer, and benefactor." ( Library Journal)

What listeners say about Gregory the Great