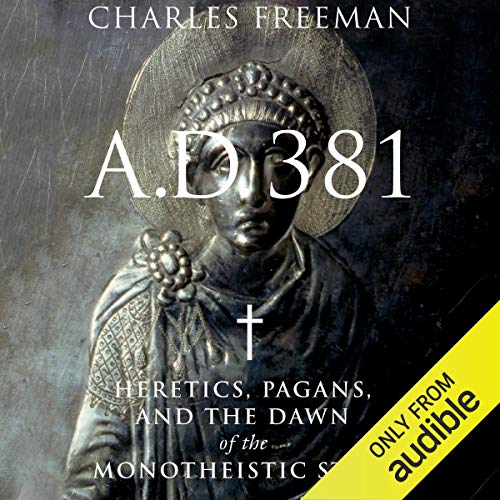 By: Charles Freeman
Narrated by: Robert Blumenfeld
Try for $0.00

In A.D. 381, Theodosius, emperor of the eastern Roman empire, issued a decree in which all his subjects were required to subscribe to a belief in the Trinity of the Father, Son and Holy Spirit. This edict defined Christian orthodoxy and brought to an end a lively and wide-ranging debate about the nature of God; all other interpretations were now declared heretical. It was the first time in a thousand years of Greco-Roman civilization free thought was unambiguously suppressed.

Dont pass it up

after reading some of the reviews, I almost passed on this audio book-im glad I didn't! While some valid points were made in these reviews, after actually listening to AD 381, I don't think the narration is a deal breaker. Blumenfeld does tend to read a little fast, but he's a good, and professional narrator over all. So, if your on the fence with this one because you like the material but are afraid of the narration, I would say get it. I find no problems as far as immersion is concerned and the material is very very good

Requires a couple of listens.

OK, so I've ONLY listened to the entire book once. I really feel I need to listen to it again to "get" the point fully. Lots of details, lots of people. The last chapter, summarizing the book's theme, should have come at the beginning to give more perspective and set up a framework for listening to the rest. My biggest criticism, however, is the narrator: he reads WAY TOO FAST, and with insufficient phrasing and inflection. This is very dense material, and while interesting, needs to articulated carefully to establish the point of each sentence. If you are interested in late antiquity and the early middle ages, the book paints a detailed arc of history, but you don't realize what that arc is until the summation at the end.

Did Robert Blumenfeld do a good job differentiating all the characters? How?

No all sounded the same. Was not big deal with the subject matter.

Freeman does good, but...

I've read Freeman before. This audible book is fine but LORD I want to smack the narrator! Is he trying to sound pedantic? He has this horrible habit of ending a sentence with an upWARD TONE?!?! It gets daMN ANNOYING! Seriously, he sounds like an obnoxious minor character in a Dickens's play. He has good timbre. But he really needs to change his style. Despite that the book is good. A lot of what's here can be found in "The Closing of the Western Mind."

Creation of the Dark Ages

This identifies exactly why, where and what took place to the European mind set that religion affected completely to become Dark.
The finale leaves you wondering what could have happened!

Really enjoyed this book. I have always been interested in this subject. The pagans, early church politics, and heresies interactions are fascinating. This writer handles it all in a professional and well written manner. The narrator was masterful. Good listen.

Charles Freeman's account of the events surrounding and following the First Council of Constantinople condenses an enormous amount of scholarship into accessible form. Unfortunately, Robert Blumenfeld seems to think he's reading a script for 1940's newsreel footage; I found his performance distracting and annoying, particularly in the first few chapters (Mr. Blumenfeld seems to have lost a bit of steam as the book goes on, taking some of the edge off his highly stylized (and inappropriate, IMO) "dramatization." Interesting book; lousy performance.

This is a topic that I am greatly interested in, but the reading of this book is very dull. Even though the information is interesting, the reading lacks inflection and storytelling -- the reader pounds on and on and after I while I found myself tuning out. I quality reader would have made this book worthwhile.

A strange take, and a mountain of detail

This is a hard book to review. I'm glad I listened to it, but I feel like I can't strongly recommend you do so. It's not a very enjoyable listen. I found myself frequently turning it off, even when I was doing nothing terribly important. It's full of detail that perhaps is important to making the author's case (though I question that), but which very few people will ever absorb let alone recall.

What I liked most about Freeman's perspective is that he engages his historical subjects as human beings. I remember from my required freshman humanities courses a constant refrain about how we can't impose our values on the past, that historical figures like Augustine need to be related to on their own terms, and that looking at them through something like a modern psychoanalytic lens is just wrong. Freeman is, unapologetically, more a popular writer than an historian or humanist, and he doesn't dilly dally around with this. He shows that early Christian thinkers asked the sort of questions you'd expect sensible people to ask when confronted, in a serious way, with nonsense: was Jesus less than God the father since the latter created (begot--what does that even mean?) the former? Was Jesus created at the beginning of time, or was he there before that? Did he assume his human essence at birth, or did he exist in Mary's womb? Freeman attempts to connect this line of inquiry directly with the tradition of Greek thought: early Christian scholars were trained at schools that could trace their origins back to Plato. These early scholars could frame solid philosophical arguments and could debate (and felt able to debate without fear of earthly or heavenly reprisal) at a high level, whereas later Medieval scholars had lost this ability. I'm no expert, but I found this line line of argument compelling.

The obvious conclusion from Freeman's arguments both in this and his previous book (which I have not read) is pro-secular: Christianity, and more generally religion, closed the Western mind. From his introduction, Freeman is clearly unhappy being associated with this view. He makes the obligatory swipe at New Atheism before sketching out a subtler thesis: It wasn't religion or (mono)theism that ended the tradition of free inquiry in Western thought for a thousand years, it was rather the intervention of the state into religious matters, especially in a religious conclave of 381. This is the core of Freeman's argument, and the main point on which I'm unconvinced. There are several lines of attack, but I'll just take one: that state intervention to resolve the never-ending disputes of the early Christian church was inevitable well before 381 given the interminable and destabilizing nature of the disputes themselves. This was clearly the perspective of many of the state actors (various emperors especially) who Freeman quotes. In the end, I felt like Freeman was trying to thread a needle (with a camel).

Freeman has a strange reverence for philosophical debates, even when they fall into the Seinfeld category of debates about nothing. Again, I like that he engages with these historical disputes without condescending to them, but I feel like there's way more detail than there needs to be. This is, unfortunately, usually what happens with scholars who are questioned: they write another book that reads like the endnotes to their first book. At the same time, Freeman's lack of academic chops shine through in his failure/refusal to engage with, or really give any sense at all of, the existing literature. I have no idea which pieces of Freeman's argument are novel and which are well-trodden. I'm also unclear (I assume these are in actual endnotes of the print version) what his sources are, or how this information about the 3rd and 4th century came down to us. That would have been quite interesting to discuss in the text, I think.

I hope this makes clear why I say I'm glad I listened to it but I don't recommend it. As for the narrator: yes, he has an annoying way of ending every sentence like it's a cliffhanger. But it honestly stopped bothering me pretty quickly, and I doubt you'll find it a problem.

Extraordinary history that offers background on how the Western world arrived where we are today.