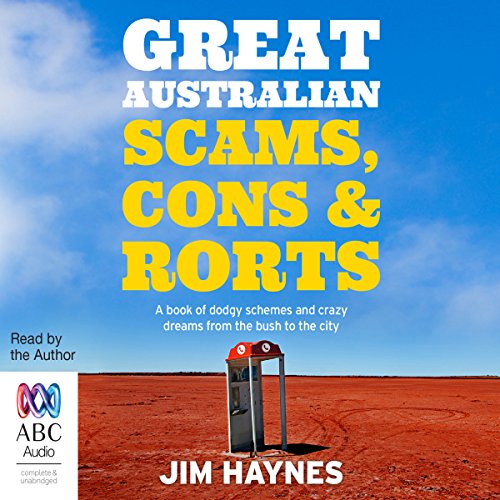 The ultimate collection of Australia's craziest cons and mad schemes from a master storyteller.

Australia is the birthplace and setting of some of the wildest, craziest and least-likely-to-succeed cons and rorts in history. From the cleverest double-crosses to the most unlikely and maddest schemes, master storyteller Jim Haynes reminds us that we've never been shy of pulling a trick or two.

So how did a clever bushman who 'couldn't lie straight in bed' steal 1,000 head of cattle and get away with it even though he was caught 'red handed'? And what about the disappearing work of art that suddenly dissolved only to reappear at an auction years later? Or how about the butcher from Wagga who passed himself off as a French-born English duke to inherit a small fortune? And then there was the small matter of a horse, a tin of paint and a million-dollar double-cross that became known as the Fine Cotton Affair.

In only the way he can, Jim Haynes has collected a veritable 'Gullible's Tales' of unexpected and surprising true stories that may seem hard to believe.

What listeners say about Great Australian Scams, Cons and Rorts

I'm returning this book because I find it boring and am not keen on the narration.

The collection of stories ranged from cattle duffing (stealing livestock) to horse race fixing to colloquial yarns. The authors embedded wit and enthusiasm places them alongside the reader during the journey. I would recommend this to anyone with an interest in a historic perspective on Australian culture, or simply enjoys a good ol’ yarn. Plenty of stories to retell to young children in this.