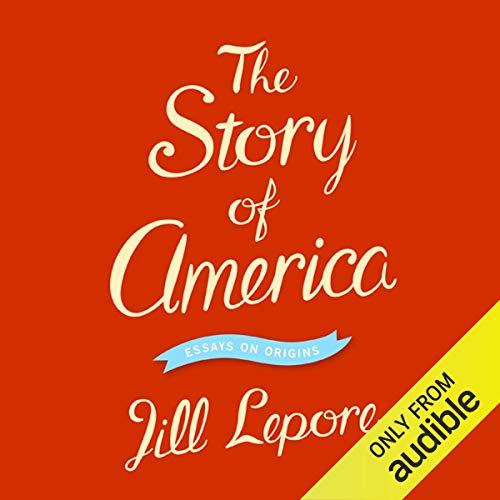 The Story of America

By: Jill Lepore
Narrated by: Colleen Devine
Try for $0.00

In The Story of America, Harvard historian and New Yorker staff writer Jill Lepore investigates American origin stories - from John Smith's account of the founding of Jamestown in 1607 to Barack Obama's 2009 inaugural address - to show how American democracy is bound up with the history of print. Over the centuries, Americans have read and written their way into a political culture of ink and type.

Part civics primer, part cultural history, The Story of America excavates the origins of everything from the paper ballot and the Constitution to the I.O.U. and the dictionary. Along the way it presents fresh readings of Benjamin Franklin's Way to Wealth, Thomas Paine's Common Sense, "The Raven" by Edgar Allan Poe, and "Paul Revere's Ride" by Henry Wadsworth Longfellow, as well as histories of lesser-known genres, including biographies of presidents, novels of immigrants, and accounts of the Depression.

From past to present, Lepore argues, Americans have wrestled with the idea of democracy by telling stories. In this thoughtful and provocative book, Lepore offers at once a history of origin stories and a meditation on storytelling itself.

What listeners say about The Story of America

A Fun Read on Historical Subjects

This thoroughly enjoyable book is a collection of essays previously published in New Yorker magazine. The text is a jumble of subjects Lepore seems to have bumped into while professing at Harvard, then turned into articles targeted for popular consumption paid for by a venerable magazine. Subjects vary widely: Edgar Allan Poe, the history of voting, Henry Wadsworth Longfellow, debtor’s prisons, Kit Carson, presentation of the U.S. in school plays, and some others. Despite being popular history, Lepore did research on all of them and has her subjects in hand. She writes drolly with good, insightful metaphors—both her own and others’. For example: In the pantheon of American “superhero” Founding Fathers, she writes, Tom Paine is a lesser demigod only made use of occasionally, like Aquaman. Another example: she quotes farmer/ex-Revolutionary soldier William Manning in the 1790s: “It [the Constitution] was made like a Fiddle, with but few Strings, but so that the ruling Majority could play any tune upon it they please.” Surprisingly, her book is free of political bias, a seeming prerequisite for a person who 1) has a Ph.D. in American Studies, and 2) chairs the history department at Harvard. I scrutinize history books assiduously, just waiting for some injected political nonsense to appear and ruin them so I can grind my teeth. I had nary an objection to Lepore’s book. Want to read a well written, entertaining collection of informative historical essays, read well by a narrator? Here is one worth the price.

These “ Stories of America” are eye- opening, informative and entertaining. I love learning “ the inside scoop” on our country and Jill Lepore gave me much to ponder, say an inner “ so that’s how it was.” For lovers of American
History, I suggest adding this to your reading list!

Horrible narrator (so nasal she makes the hair on my neck stand up) and much drivel mixed in with a little interesting information. I had two US history titles on my wish list and I definitely picked the wrong one.