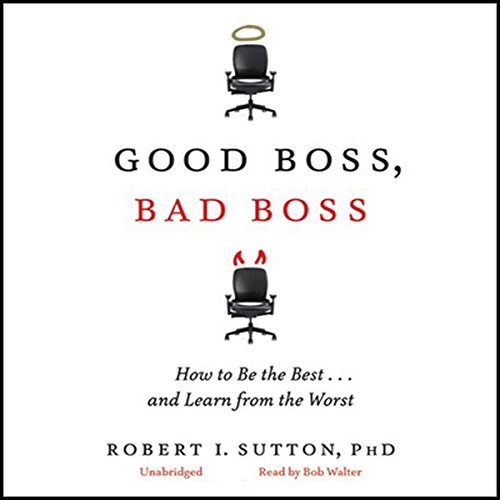 If you are a boss who wants to do great work, what can you do about it? Good Boss, Bad Boss is devoted to answering that question. Stanford Professor Robert Sutton weaves together the best psychological and management research with compelling stories and cases to reveal the mindset and moves of the best (and worst) bosses.

This book was inspired by the deluge of emails, research, phone calls, and conversations that Dr. Sutton experienced after publishing his blockbuster best seller The No Asshole Rule. He realized that most of these stories and studies swirled around a central figure in every workplace: THE BOSS. These heart-breaking, inspiring, and sometimes funny stories taught Sutton that most bosses - and their followers - wanted a lot more than just a jerk-free workplace. They aspired to become (or work for) an all-around great boss, somebody with the skill and grit to inspire superior work, commitment, and dignity among their charges.

"We are damned lucky to have Bob Sutton. While his every word is backed up by significant research, he writes in simple sentences that make enormous sense.... Good Boss, Bad Boss is as good as it gets. (Tom Peters, author of The Little Big Things and co-author of In Search of Excellence)

Spend 20-years in management and you'll work your way through a tower of leadership development and management practices books. Some are insightful while most simply confirm the things you already knew. Good Boss, Bad Boss was different. Sutton provides not just conceptual truths gleaned from his research, but he gets down into the trenches and identifies specific, individual behaviors that can either help or hurt a manager or leader's efforts to perform the job. I cannot recall another book that eschewed theory and provided a practical roadmap as useful as that which Sutton provides here. Banish the Bosshole with this book.

A must for supervisors

When I wake up in the morning, I always say to myself...I will be kind to my staff.
This book strenghtened my beliefs that kindness begets kindness, respect begets respect.
One of the best books I've ever listened too. Thank you Mr. Sutton for great advice and insights.
Angie Shelton
Stanford University
Billing Supervisor

On Christmas Day, my new boss sent me an email asking about a 6 month old charge from a vendor. Three days earlier, he sent me an email while I was driving to a client meeting 90 minutes away. When I checked my emails before starting the meeting, I found the original email - and several strident follow ups, demanding an immediate response to the original email and an explanation for why I hadn't responded immediately. Immediately. And, just before New Years' Day, while I was on a family vacation, he had me work for hours on a project he'd already cancelled.

I could go through Roget's and pick out any number of words for the situation and how I feel about the last 10 days of the year. But, as Robert I. Sutton, PhD points out in "Good Boss, Bad Boss: How to Be the Best…. and Survive the Worst" (2010), it could have been much, much worse. At least I wasn't water-boarded as a team building exercise like one literally tortured employee in his book.

Sutton is a Professor of Management Science and Engineering in the Stanford Engineering School. He's got some great concepts - simplified as the 'No asshole rule' that, from my bottom-of-the-pile, no-one-under-me, I-never-want-to-manage-anyone perspective, work. And work well.

I don't know if my previous boss read this book or Sutton's "The No Asshole Rule: Building a Civilized Workplace and Surviving One That Isn’t" (2007) or just knew some parts intuitively, but he (mostly) followed them. When things worked, he left us alone. When he needed to criticize, he did so swiftly and without apology. Mostly, he deflected outside interference and let us do our jobs. These are concepts Sutton champions, along with rigorous honesty, especially in the face of problems; managing what you know and not rising to the Peter principal level; keeping your mouth shut about confidential information; and showing empathy for employees. Sutton's got specific management techniques for handling difficult situations. I've seen them in action, and they work.

As far as employee survival techniques go, I'd expected more from a book that's title includes, ". . . and Survive the Worst." For example, becoming, in the words of Roger Waters and David Gilmour of Pink Floyd "Comfortably Numb" (1979) is a great idea, but Sutton doesn't explain how to do it psychologically. It seems like it happens to a lot of employees in Sutton's book as a natural result of unremitting demoralization, so maybe I'll get there.

This is worth the read/listen if you're a manager or want to be one. In fact, take the Asshole Rating Self-Exam (ARSE) test that's available on line and read the book before becoming a manager. If you're already a manager, have someone you trust fill out the test for you. Please. Follow the recommendations so you are called 'El Jefe Mas Excelente' instead of something else. Unfortunately, though, this book isn't as helpful for us worker bees trying to survive in a restless hive.

Bob Walter was good narrator, and the pacing and editing was good.

I’ve been an employer for 10 years at this point Ande have learned a lot along the way. Despite having a memory full of what to do and not to do this book brought to light some helpful perspectives.

I read this because I am struggling with a fearful, controlling boss... Didn’t address that so much as made me rethink all my moves and how I can impact positive change in my multi-billion $ organization. And I LAUGHED OUT LOUD the whole time. No BS, this guy. The Real Deal.

Every boss should read this book.. You'll definitely learn something new! A fundamental book to have in organizational culture of a sophisticated work place.

I am a young boss at Stanford and this book has opened my eyes to so many opportunities to be a good boss and how not to be a bad boss!

This book states the obvious

This book is primarily a series of anecdotes. While entertaining for the first 30-45 min, it gets tedious after that. The book also states the obvious things that make good vs bad bosses. I stopped listening to the book because I wasn't learning anything new. Take a pass on this book; there's better reading (listening) available.

Great book I loved it. It made me look at myself

Great book I loved it. It made me look at myself and situation from a new perspective.

Such a fun book!

Great read, I will do my best not to be one of the "boss-holes"!!! lol