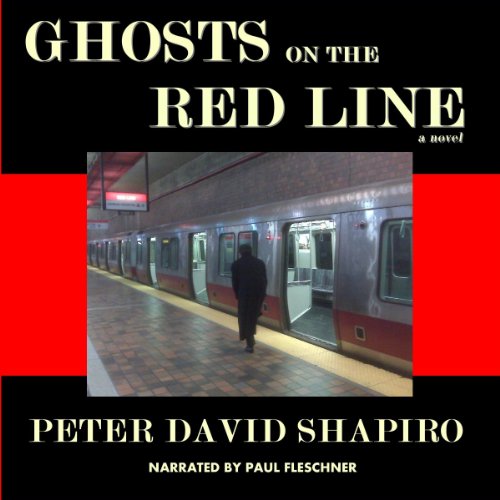 Ghosts on the Red Line

By: Peter David Shapiro
Narrated by: Paul Fleschner
Try for $0.00

Consultant Harry West is hired to investigate by the Massachusetts Bay Transportation Authority. His project turns personal when his ex-wife Alexandra Ben-Tov meets their beloved daughter on the Red Line who looks like the teenager she might have become if she had lived. Are the visitors on the Red Line ghosts or hallucinations? Either way, after Harry's team discovers the source of the visitations, the MBTA declares that it will bring them to an end.

Alexandra has a brilliant idea: Build Visitation Rooms that replicate the features of Red Line train cars so that people can continue to meet their loved ones. But not everyone approves. The Archbishop of Boston seeks to get Visitation Rooms banned in Massachusetts. And a gangster who frets that his victims will come back from the dead warns Harry and Alexandra: Cancel Opening Day for the first Visitation Room, or else.

Narrator Paul Fleschner beautifully captures this surprisingly moving horror novel. A growing number of riders on Boston's Red Line subway system report seeing, talking to, and even touching their departed loved ones, including pets. Fleschner conveys the emotion, skepticism, and differing viewpoints associated with the unique situation, including a creepy and questionable psychic who is eager to get in on the action. As the sightings and publicity increase, the Boston Transit Authority becomes concerned about the company's reputation and rider safety and hire experts to try to explain the phenomena. Fleschner's technical and scientific explanations are compelling, keeping listeners on track and making audio the ideal vehicle to experience this uncommon story. S.G.B. © AudioFile 2014, Portland, Maine [Published: MAY 2014]

What listeners say about Ghosts on the Red Line

Would you listen to Ghosts on the Red Line again? Why?

Unlikely, but i was deeply moved by this book. It is truly one of the best audio books I have ever heard. Both content and performance are amazing.

The integrity of the scientific defence. An obtuse concept made completely believable. Amazing.

He blew me away with his tone, consistency, and character development. I will look for this reader going forward.

I wish I could.

I urge you to get this book. I read reviews on Audiofile magazine, and downloaded it as a direct result, and am blown away. You will be as well!

A Ghost Story of a Different Sort

Would you consider the audio edition of Ghosts on the Red Line to be better than the print version?

I did not read the print version, but plan to in the future

The determination of Harry and Alexandra. They just never gave up!

Which character – as performed by Paul Fleschner – was your favorite?

Harry West. Out of all of the well thought out characters, his was the most human to me. I loved the way all the characters interacted and how Harry pulled everyone together to form a perfect group.

When Harry saw his daughter on the train for the first time. I can only imagine the joy he felt at seeing her, but also his grief that he didn't get the interaction that he wanted from that first time.

Paul Fleschner does a wonderful job giving each character a unique voice and is consistent in the delivery. From the soft spoken Alexandra, to the slimy, State Representative Walter McCullif to the hard knife edge of Shiny Mikey, he gives each character mannerisms and brings them to life.