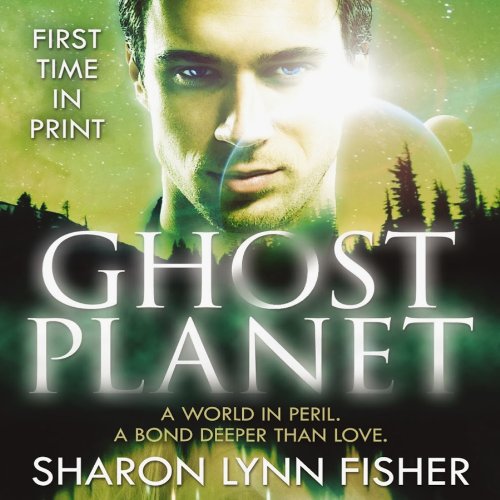 By: Sharon Lynn Fisher
Narrated by: Dina Pearlman
Try for $0.00

Psychologist Elizabeth Cole prepared for the worst when she accepted a job on a newly discovered world--a world where every colonist is tethered to an alien who manifests in the form of a dead loved one. But she never expected she'd struggle with the requirement to shun these "ghosts."

Reincarnated as a ghost, Elizabeth is symbiotically linked to her supervisor, Murphy--creator of the Ghost Protocol, which forbids him to acknowledge or interact with her. Confused and alone--oppressed by her ghost status and tormented by forbidden love--Elizabeth works to unlock the secrets of her own existence.

But her quest for answers lands her in a tug-of-war between powerful interests, and she soon finds herself a pawn in the struggle for control of the planet...a struggle that could separate her forever from the man that she loves.

What listeners say about Ghost Planet

This was actually less ghostly than one might think. Yes the dead people are ghosts in a sense as they are people who have died and came and are bonded to people that they have in their lifetime. Oh...this st o ryan isn't set on planet earth..but a distance plant called RR or something like that. Smart move by the author as it is much easier to wrap ur mind around the ghost r aliens thing.

The story literally becomes engaging right from the beginning...and remains that way till the end. The romance and character development was a nice bonus.

Well worth the credit...narration was great as well...

Ghost Planet is about a planet (Ardagh 1) that has recently been colonized by humans. Every human who comes to Ardagh 1 soon discovers that they have a ghost - a person who they knew, who had died, who must follow them everywhere. In order to cope with the resulting depression among the colonists, the colonists are instructed to follow Ghost Protocol, which involves refusing to interact with the ghosts in any way. Our protagonist, Elizabeth, shows up on the planet and meets with her new boss, Murphy. Much to her horror and surprise she quickly discovers that she is a ghost herself - she died when her transport crashed during landing - and she is now the ghost of Murphy, who will not acknowledge her.

Sharon has defiantly captured my attention with this New and very entertaining story. I really enjoyed this book and it held my full attention all the way to the end. For me, I would of liked a little more romance and i wasn't overly keen on the Narrator - but these things aside - it was an excellent listen. :)

Interesting setting for a SFR

What made the experience of listening to Ghost Planet the most enjoyable?

I liked the originality of the setting and the ratio of the science fiction versus romance. It was just great! Loved the twists the story took and the chemistry between the protagonists.
Also the complexity of the issues that the book touched on were a nice surprise.

I found the main bunch of protagonists most interesting: Elizabeth, Murphy, Peter

Have you listened to any of Dina Pearlman’s other performances before? How does this one compare?

Yes, I really liked Dina Pearlman's other performances: her two voice works of Linnea Sinclair books were amazing. This one I liked a little less, because I found that Dina sounded 15 years older then the protagonist I imagined in the book. Beside that it was good.

The moment that moved me the most was when Elizabeth had found aunt May's ghost biscuits in her cupboard. It was very sad.

This was an unknown author to me but I took a chance & boy am I glad that I did! Ghost Planet is a tightly written, unique book. It was a breath of fresh air when most books written today are formula written books with a huge dose of sex. I'm not a prude & sex is good for books but there has to be a story-line and this one has it in spades. The author came up with ideas for the story that haven't been used before & kept me on edge just to see what was going to happen next. I HOPE THAT THIS WILL PRODUCE A SERIES for the secondary characters. As I said, this is not a formula book & was brilliantly written. I was never bored, nor did I KNOW what would happen next (as I sadly usually do in books). Before I was through with the first 3rd of the book I was searching for other books by this author. I was hoping it had developed into a series...it hasn't yet but there is hope. However, I'm now listening to the other book written by Sharon Lynn Fisher & am happy to say that the FIRST BOOK WASN'T A FLUKE & this author has IMAGINATION and the ability to weave a great story. As a matter of fact, I want both this book and The Ophelia Prophecy to go onto series. They both have untried, unique and interesting plots & are fast paced books.

The only thing that I felt blah about [to me] was the narrator. She shouldn't do characters with a particular accent if she can't do that accent. Otherwise, she was just OK for this book. I have strong feelings about matching narrators up with books. A narrator can make a book awesome or can make the best book bomb. Thankfully, this one didn't hit the bomb stage. I don't want to take away from this narrator too much because I feel sure that she does great work but this one just wasn't her forte. If she is allowed to find her best fit...she could be an asset as some of the great narrators are...they have found the best fit for them & have stuck with it, thus made a name for themselves, the books they read & have given us some great listening hours.

IF you want an exciting, action packed read/listen grab this book! If you are TIRED OF FORMULA BOOKS & want something with IMAGINATION & thought - grab this book.
Sharon Lynn Fisher is a breath of fresh air in a sea of bland listening because so many authors are out to make a $$ or are told they must follow a formula to sell. Seriously, can't you usually figure out what will happen next in most books today? I know I've read & listened to so many that I can.

Finally, someone has some new ideas and a fresh perspective.

I'M SO GLAD I DIDN'T MISS THIS ONE

Whoa, what a great surprise this unique, refreshing and riveting Sci-Fi/Romance listen turned out to be with it's complex, creative, character and planet-building and a plot that was both imaginative and romantic.

As soon as Elizabeth arrives on Ardagh 1 (aka Ghost Planet) and is met by Murphy, the handsome and charming Irishman she's going to work for, their mutual attraction and light flirting starts. However, it isn't long before the multi-layered, character driven plot takes a nose-dive in a whole new direction as Elizabeth finds herself fighting for her very survival in a storyline that's got character and plot twists, shocks, surprises, danger and action lurking round every corner.

There's a nice tender romance between Elizabeth and Murphy as they struggle treachery and manipulative villains together but their passion, faith in each other and deep love for one another is what's needed to save themselves..... and a dying Planet.

Worth a credit? A host of secondary characters, a convincing love story that's got drama, sex, heartache and joy, a likeable and intelligent H/H and an original well-written Sci-Fi adventure made this and enjoyable, addictive and creditworthy listen. But it's pure fictional, futuristic fantasy with a tiny bit of fun thrown in.

What other book might you compare Ghost Planet to and why?

I definitely think this book should be ranked in such standards as George Orwell's 1985. I know others who idolize that book will disagree. However, I feel that after some time has passed it could be "classic" worthy.

I honestly didn't care for the narration. She wasn't horrible, but I would say she was far from good. My biggest complaint is that she didn't do much fluctuation on tone and when she did it was just all off for the part. Example, the character was suppose to whisper and she speaks it with her normal tone of voice, not getting any quieter at all. Another is that the character was suppose to say a phrase in a seductive way, but again, not tone difference from the rest of her narration. There were numerous times she did stuff like this. Additionally, lot of the character's voices were just all wrong.

If you could take any character from Ghost Planet out to dinner, who would it be and why?

what are with these questions?

I throughly enjoyed this book. It was unlike any I've ever read, and I've read a ton of science fiction books. It was fantastic to finally read something entirely original. The fresh material made the whole book exciting and interesting!

Aside from the unique plot, I loved how Fisher interwove elements of discrimination and the conflicts of our modern society into the book. I felt like this book really did a good job of pointing out the concept of truly connecting and working together in order to bring about peace, as well as a way of saving our planet.

My one and only problem with this book is how fast and throughly the relationship advanced between the two main characters. It felt artificial. By the end of the book I felt like their relationship was at an appropriate level because they had been through so much. But the beginning of the relationship was quite unbelievable to me.

Other than that I thought it was a darn good book!

What a load of Mills and Boon!!!

The book started so well, what a brilliant new idea of 'ghosts' as aliens. What I hadn't realised was the all consuming, really naff love story between the charming 'Oirish' Murphy and Elizabeth. The sex scenes between them were awful and it happened so often I'm surprised the poor woman could walk! I felt they detracted from the story which could have been so much better.

In a nutshell, great idea but written in the style of Mills and Boon!

What disappointed you about Ghost Planet?

I thought I was getting scifi not 50 shades of grey. The most off putting thing was the moaning. Also the narrator's impression of the supposedly Irish male lead was horrible.

I almost missed the ending trying to fast forward the cringing and constant "sex" scenes.

Would you be willing to try another one of Dina Pearlman’s performances?

What character would you cut from Ghost Planet?

If anyone knows of a similar idea in another book or series please let me know. The ideas were brilliant. Pity the author felt the excruciating sex scenes helped.