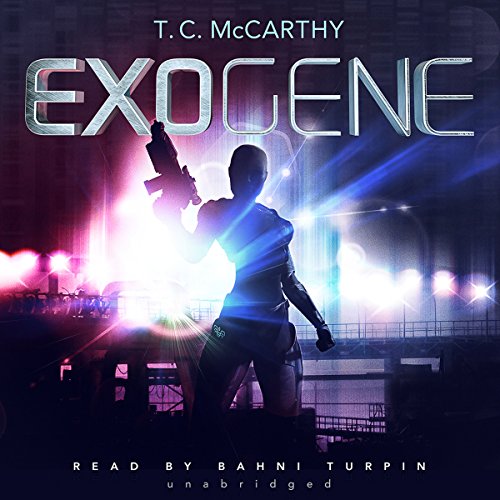 Exogene (n): factor or agent (as a disease-producing organism) from outside the organism or system. Also (slang): classified Russian program to merge protohumanoids with powered armor systems.

Catherine is a soldier. Fast, strong, and lethal, she is the ultimate in military technology. She’s a monster in the body of an 18-year-old girl. Bred by scientists, grown in vats, indoctrinated by the government, she and her sisters will win this war—no matter the cost.

And the costs are high. Their lifespan is short; as they age they become unstable and undergo a process called “the spoiling”. On their 18th birthday they are discharged. Lined up and shot like cattle.

However, the truth is, Catherine and her sisters may not be strictly human, but they’re not animals. They can twist their genomes and indoctrinate them to follow the principles of Faith and Death, but they can’t shut off the part of them that wants more than war. Catherine may have only known death, but she dreams of life, and she will get it at any cost.

What listeners say about Exogene

This was my second T. C. McCarthy book. I read the first in this series. I thoroughly enjoyed the first book, which I also read in audio form. This one's entire audio performance was so atrociously bad that I'm not certain if my impression of this book as less good than the first was due entirely to the performance or if the book itself is also of lower quality.

The performance by Turpin is terrible! She reads in monotone and is insanely boring to listen to. Put me to sleep every time, even in battle scenes. Additionally, some individual words were clearly re-recorded in a different session and dubbed into the final product. They are randomly louder and even in a different tone of voice than the rest of the words in the sentence. This is generally the case with the names of places. It seems as if they were mispronounced in the first performance and then just dubbed over later? In any case, the mix of monotone with suddenly louder place names makes for a very uncomfortable read. In spite of wanting to know the story, I gave up partway through.

Would you try another book from T. C. McCarthy and/or Bahni Turpin?

Would you ever listen to anything by T. C. McCarthy again?

If you could play editor, what scene or scenes would you have cut from Exogene?

The Genre...it is not SF, it is a romance novel

I read the authors first book in this series, it was not bad, and I bought the follow-up based on the first review in this list. This review is a plant, designed to suggest a similarity to a book written by Weber, Flint or Ringo.

What it is in truth, is a Chick Flick.
Woman love, peolpe hatred (especially men), LAME descriptions of future tech......and of all the wierd things...religious overtones.
You have been warned :)

Exogene sets up as a much more traditional military sf novel than did the author???s debut, 2011???s Germline. Germline was read by Donald Corren, and was a drug-addled war journalism narrative, glossing a bit over technical details whether of weaponry, mech suits (other than detailing a bit of the waste system), or of the eponymous genetic engineering. Here, Exogene shares only the setting ??? a near future war over mineral resources in Kazakhstan and its surrounds ??? and a first person perspective. The voice has changed, as has the narrator???s attention to technical detail. Turpin shows us the Subterene War from the point of view of Catherine, one of the genetically-engineered soldiers used by the United States and its allies. We find out some technical details of her flechette rifle such as its capacity, speed, and firepower. We find out more about the science and psychology and training behind the Germline project, and the lives, loves, and losses of women who were more shallowly perceived by the aforementioned drug-addled male journalist in the first book. This is not to say that there aren???t a few missteps: in the first quarter of the audiobook, some post-production artifacts remain from re-recordings for corrected pronunciations, though they aren???t too distracting. And for my money, though this was admittedly a review copy, some of the emotional impact of these losses don???t appear fully realized or felt. (Though, again, there are drugs and psychological conditioning at work.) But overall Turpin does a quite capable job here of bringing the ???girls??? (16-18 year olds) to a richer life, amidst a wider and richer cast of characters than inhabited the close quarters of Germline. Turpin???s turn at Russian (and other accents) are mostly well done, easily besting recent attempts from other non-native narrators (Malcolm Hillgartner???s forgettable tries at Russian, Hungarian, and Chinese accents in Neal Stephenson???s Reamde for example) though at times the closing words of sentences lose their flavor. It???s a good thing Turpin can handle her Russians, because we see quite a few of them, and hear a fair bit of Russian along the way towards discovering what it is the Russians are up to, exogentically. (If you???re guessing ???exoskeleton???, you???re on the right track.) While Germline spent quite a bit of the capital of sf ideas for the world of the Subterrene War and had a more unique voice, Exogene sees McCarthy come a bit more into his powers of plot, and already leaves me wondering on where he???ll go with the trilogy???s conclusion, Chimera, due out in August.

I am in Chapter 1. So far, it is fantastic, better than Germline. Detail provides excellent immersion.