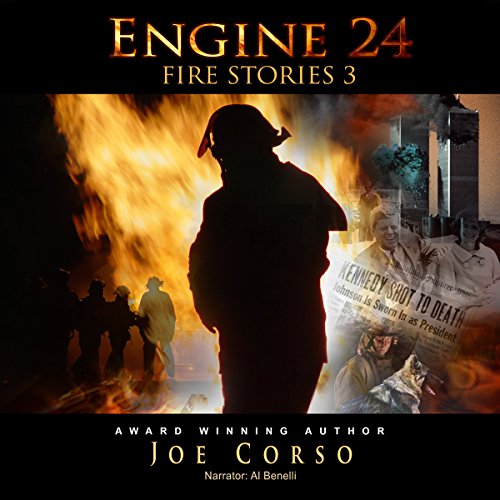 The final book in the Engine 24 Fire Stories trilogy focuses on the more turbulent times that firefighters had to endure in New York City during the years 1963 to 1975.

In this book, the era of Kennedy's assassination, race riots, and looting are related through the eyes of a NYC firefighter. Joe Corso describes where he was and what the reactions of the firemen and officers were the day that President Kennedy was killed.

The author describes what it felt like to be detailed to La Casa Grande - "The Big House". Engine 82 was one of the busiest fire companies in the world during the race riots of the '60s. It was located in the Fort Apache section of the Bronx - and the tenseness of always having to be on guard in a hostile environment in which those men had to work is shared in gritty detail.

Corso writes of how one good firefighter lost and then regained his nerve; he writes of fires long forgotten and how, over the last 50 years, our moral codes have changed, especially pertaining to one fire that happened many years ago on Bedford Street in the West Village.

If you could sum up Engine 24: Fire Stories 3 in three words, what would they be?

What other book might you compare Engine 24: Fire Stories 3 to and why?

OK... This may sound a bit dumb, but I'm comparing it to the first TWO volumes written by Joe Corso (aka D'Albert). I was sort of sitting on the front porch waiting for volume THREE because the first two volumes were outstanding. My dad was a NYFD firefighter with 43 Hook & Ladder in Manhattan around the same time Joe served with Engine 24. Joe's stories fill in so much of what my dad chose NOT to share with our family. He seldom talked about his work... we had to glean what was going on by the expressions on his face when he came home... which were often vastly different. This book explains of a lot of that mystery. It also fills in a couple of "holes" in Books 1 & 2 that I didn't realize were "holes" until I read this volume... Joe provides a few interesting "fill-ins" here in volume 3.

The book is written as a narrative... so my favorite character is "Joe"... needless to say... but I just love the "color" brought to all the other characters in Joe's life by the narrator. I've said this many times before... "Al Benelli brings a book to life... like a documentary on the radio... or a radio play. I love his performances".

Almost... This book is a flashback to the '60 & 70's. Joe recalls the day President Kennedy was shot and... as can all of us who lived through it... recalls exactly where he was and what he was doing. That triggered my own memories and the sadness and fear I felt that day... came back to me. And then there was 9-11. I came pretty close to tears, again. God bless our first responders and grant safe keeping to all those who lost their lives to that cowardly attack.

I've heard from a few audiobook websites that the compilation of ALL THREE VOLUMES of Engine 24 will be released soon as a single audiobook. If you haven't read (heard) any of the Engine 24 series you might want to wait a bit... All three in one is an excellent purchase option.