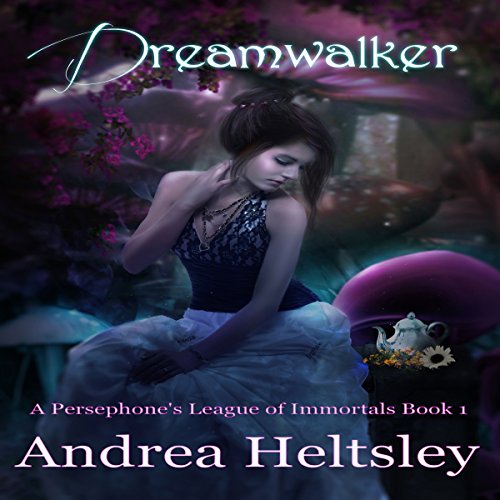 By: Andrea Heltsley
Narrated by: Meghan Kelly
Try for $0.00

Noel Kennedy lost her boyfriend, her job, and her dignity all in one week and then gained an entirely new life. Hunted by a mysterious league of immortals, Noel must rediscover her forgotten past while uncovering the truth behind the two men who battle for her heart, both in dreams and in reality.

Entranced, she slowly unravels a world she was meant to stay out of, one filled with creatures she once thought to be myth and dangers that threaten her very soul. Now Noel begins the fight for her life and must choose between two men who call to her heart. Can she escape a life of servitude or immortality for a chance at love?

Book one of The Persephone's League of Immortals series

What listeners say about Dreamwalker

This book had a little mythology in it, but I would have liked more. However, I still really enjoyed the book. I love paranormal as well, so I wasn't disappointed.The narrator did a great job helping me picture in my mind the different characters.

On Par for the Genre--Enjoyable, but not Memorable

Would you try another book from Andrea Heltsley and/or Meghan Kelly?

I was excited to listen to this book, expecting a new twist on the well worn genre given the reference to a Greek Goddess in the title. I found myself hoping for something a bit different than the usual supernatural young adult fare. I was disappointed in that regard. The book is standard, middle of the road, witch, vampire, magic, love triangle stuff. I enjoyed it, but did not find much to let it stand out from the hundreds of similar offerings.

The infusion of a level of Greek mythology into the story was interesting, but there was not enough of that to keep me really enthusiastically listening. The least interesting aspect was the typical story aimed at young adult readers; primarily female. Key story elements are similar to the Twilight series, the Mortal Instruments series, etc. The sexuality in the story surprised me a bit and seemed a bit much for the likely age of the average reader of the genre.

The narrator is very talented and created quite distinct character voices. However, over time I found myself distracted by the unusual cadence and rhythm of several of the female character's speech (excludes main character). There were obviously purposeful, frequent pauses in the narration at times that just do not make sense in terms of every day speaking. Maybe this was done to help distinguish the characters from each other, but it was used too often. I found it hard to follow the story line when some characters were narrated--the really odd pausing at unusual times (mid sentence, between seemingly unimportant words, etc.). The narrator's considerable talents were detracted from in this regard. I would really enjoy hearing another book from this narrator where this was not the case.

Probably. I am a fan of the genre and go see most similar movies.

Disclaimer: I was offered a free listen of this title in exchange for an honest review. I have done my best to meet that agreement.

I have to admit that I had a hard time getting into this one. At first the story felt stiff and I couldn't connect with the main character. But as it went on, it became quite enjoyable. A good read.

The performance by Meghan Kelly is what kept me listening when I wasn't so sure... She did a magnificent job. She is on my short list of favorite narrators. I would likely buy a book out of my normal genre if she were narrating.

Yes. It's an interesting, unique story.

Have you listened to any of Meghan Kelly’s other performances before? How does this one compare?

No, but I enjoyed her voice in performing this.

Just what Noel goes through.

So much potential but badly done. Was this the rough draft??

The main character is annoying. The author had a good idea but ruined it by actually writing the book. The love triangle was lame. The story wasn’t pulling me in. There was no understanding of what the PSI league did or what the Rogues were trying to escape from. Being immortal? Honestly at one point I didn’t really care.

The main character was suppose to have amazing powers but it seemed to me her only power was to fall at random into dreams I couldn’t tell what was going on in them. I made it through all but the last 20 min. When she said she had made her mind up about which bloke and then fell into one of their arms to admit she still didn’t know. Well neither did I! Nothing was said or done with either either one. Just being told she liked them. The only reason I chose one to root for was because of the narrators voice for him. The other guy had a whiny annoying voice. But again I repeat there was no story whatsoever about either of them or why they liked each other or even if they had any time to be together.

The characters were deemed good or bad based on what the author had e main character star out loud. Why was being immoral so bad? There was no back story. No world building. Only an author with a really good idea that had gone south when she started writing it.

I do want to give credit to the author for taking the time to try and write. It was a good story idea. This is just a case of a rough draft that needed lots of feedback before submitting a first draft. Just my opinion. It could have been really good.

I loved this audio book! Hot, steamy, great characters and an even better story line!

To do an accurate review there will be a lot of spoilers, so before you read this be sure spoilers are okay.

This books writing style was quite young, and also has awkward sex scenes. First I didn’t like the voice used for the best friend. But I look past that, because that’s not the writers fault. The organization they seem to be apart of doesn’t make the choices. Blah blah blah we have each other’s back but hey we don’t really care. We leave you behind and don’t care to much that you’ve been captured by our enemies. Somehow this girl magically changes some minds... I find it unrealistic that a girl can dream about a guy, be so attracted she then sleeps with him...have all these feeling and still have the exact same feeling for his best friend after barely any time with either of them. Both relationships don’t seem like love, that’s what lust is. She’s pretty plain so I don’t get why two guys are fighting over her like she’s the queen. Then later you get a small clip of Jared’s view when they first meet. That was confusing. He seems to have a spark. Then later he says he wants to be with her because they are similar?? That’s not what I got from the clip though. His character gets unlikable and I was rooting for him. I mostly liked the story plot though. Just wasn’t a fan of the love triangle or the instant love (she doesn’t actually say she loves either of them) from all of them. Also didn’t like how she says she feels a soul connection to Jared but left him in hell with little effort to help him. Poor Jared I hope he’s okay because none of them seemed to care. That’s all I have to say better than a few books I’ve listened to but I wouldn’t buy it, or use a credit. I got this for free with audible escape.

I enjoyed the story and was hooked early on. I’m interested in finding out what happened to these characters. I was given a free copy for an honest review.

When Noel Kennedy falls asleep, she dreams of a handsome man, but then she meets him in real life. Then the oddest thing happens, she starts to remember her past while uncovering messages about the two men who battle for her heart.

When Noel finds herself in the underworld, her and her friends need to fight for their lives or be lost to Persephone -

This was a very creative story that ties in with Greek Mythology. Meghan Kelly does a great job inflicting personalities into each of her characters.

Unfortunately at the time I listened to this story, only book one was available.

If you like love triangles then you will probably love this book. Unfortunately I hate love triangles. Mainly because it always seems like the person that should have a fighting chance never really got it. This book was certainly among those I could have done without the heartbreak of.