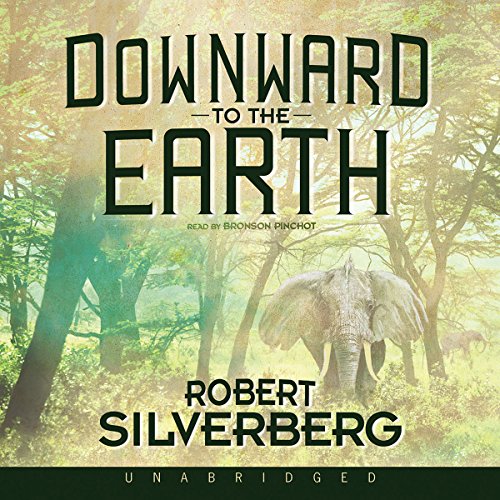 Downward to the Earth

By: Robert Silverberg
Narrated by: Bronson Pinchot
Try for $0.00

A lone man must make a journey across a once-colonized alien planet abandoned by mankind when it was discovered that the species there were actually sentient.

Gundersen returns to Holman’s World seeking atonement for his harsh years as colonial governor. But now this lush, exotic planet of mystery is called by its ancient name of Belzagor, and it belongs once again to its native alien races, the nildoror and the sulidoror. Drawn by its spell, Gundersen begins a harrowing pilgrimage to its mist-shrouded north to witness a strange ritual rebirth that will alter him forever.

This is one of Silverberg’s most intense novels and draws heavily on Joseph Conrad’s Heart of Darkness. It puts listeners at the heart of the experience and forces them to ask what they would do in the same circumstances.

“Blends mysticism, world-building, and literary references in an inventive mix…This is perhaps SF’s finest tribute to Joseph Conrad, both in its keen moral sense and its portrayal of a vividly realized alien forest.” ( Time Out)

What listeners say about Downward to the Earth

A fantastic adaptation of Heart of darkness

What did you love best about Downward to the Earth?

I read it a second time just recently and it was just as good as the first. It's a exciting and compelling adaptation of heart of darkness. A redemption novel with compelling creatures and a distinctive world. So far, this is the only Robert Silverberg book I've really liked. I'm going to read another but Up The Line wasn't all that interesting to me. This book has more wisdom to it than most and best of all it has a good ending, something separate from most science fiction. Something very compelling. I won't say more!

Have you listened to any of Bronson Pinchot’s other performances before? How does this one compare?

I thought the audio performance was great. Didn't think of it too much, he did a good job of pulling me into the story rather than thinking about the performance.

My only complaint is that the story line is kind of a now classic hollywood tail of white man comes to feel bad about imperialism and his role in it. A thing the character should feel but the narrative is still on the greatness of the guy, his personal learnings, not of the charecters effected by the company and imperialism. But, that complaint is a nuanced one and criticizing silverberg on that seems a little unfair. he did not grow up in a hyper aware time.

Downward to the Earth is a superb science fiction novel! For some reason, I hadn't read Silverberg before this year, despite decades of reading science fiction. I've recently begun to discover the joys of his work. He writes beautifully and this is a thoughtful book, full of symbolism, darkness, light and discovery. The world-building is excellent and Gunderson, the protagonist, is a well-developed, interesting (and introspective) character. This is the kind of book that made science fiction my favorite genre. What a joy to discover it!

I have never encountered SciFi like this. I felt as though I was inside one of the Heinlein side stories. It's a must read.

Silverberg is at his best here; painting gorgeous landscapes and casting a bright light on the souls of his characters. The story moves masterfully, never too slowly but given the space it deserves. Mr. Pinchot is a truly gifted performer and as always gracefully meets the demands of the beautiful writing with intention, specificity, and strong, committed physical choices (for make no mistake, vocal choices are purely physical and require a serious talent and commitment). A wonderful experience all around.

Although short, as I am used to listening to over 20+ hour long audio books, this was a pleasing self contained story. The main character has an amazing arc that is full of character development as he makes his pilgrimage. And as always Bronson Pinchot gives a grade A performance.

it was a very well narrated story. enjoyable and kind of thought provoking at the end

Best reader for this book!

By deciding to listen to this particular audio book, I embarked on a journey of a, sort of, revisiting my childhood's most impressionable and memorable sci-fi/fantasy author.

The journey was pleasant and, more often than not, immersive enough.

However, disregarding the risk of repeating myself, it felt somewhat incomplete.

Another "downwards dragging" feature of this book, in my personal opinion, was the slight overdoing with the religiously infused subtexts and subplots.

Although, it felt like an attempt to tread an ultra thin, barely detectable, line between the realms of religion and spirituality or, perhaps, even mysticism.

I don't mind the latter two, but I'm strongly opposed to the former one.
That was the most deciding aspect which led me to slice off a star.

Other than that, it's an easy to recommend sci-fi adventure treat for the lovers of this kind.