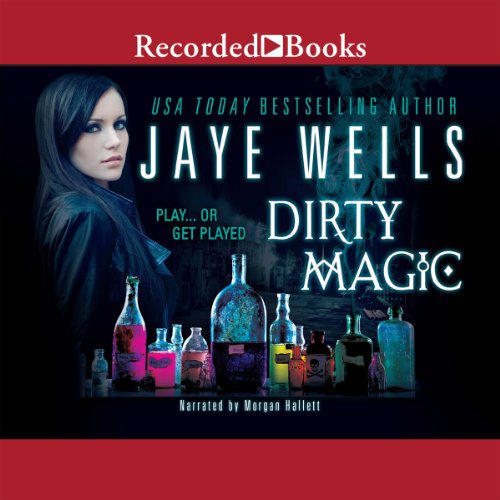 By: Jaye Wells
Narrated by: Morgan Hallett
Try for $0.00

The last thing patrol cop Kate Prospero expected to find on her nightly rounds was a werewolf covered in the blood of his latest victim. But then, she also didn't expect that shooting him would land her in the crosshairs of a Magic Enforcement Agency task force, who wants to know why she killed their lead snitch. The more Prospero learns about the dangerous new potion the MEA is investigating, the more she's convinced that earning a spot on their task force is the career break she's been wanting. But getting the assignment proves much easier than solving the case. Especially once the investigation reveals their lead suspect is the man she walked away from ten years earlier-on the same day she swore she'd never use dirty magic again. Kate Prospero's about to learn the hard way that crossing a wizard will always get you burned, and that when it comes to magic, you should never say never.

What listeners say about Dirty Magic

The concept of the story is pretty good, and the characters are fairly interesting if a little trope. Unfortunately, the dialog reads like it was written by a bored, Midwestern housewife who learned to write "tough street talk" while watching old episodes of "Dragnet." In one scene, the hardboiled special agent actually says "Come on team, weve got crimes to solve" I mean COME ON! Who talks like that?

Would you be willing to try another book from Jaye Wells? Why or why not?

Probably not, her juvenile writing style makes it almost impossible to enjoy her fairly good plot.

What aspect of Morgan Hallett’s performance would you have changed?

She did really well considering what she had to work with

I might, if the person who wrote the screenplay changes enough of the dialog around it might make a decent movie.

I only read this book because I'm such a big fan a Kevin Hearne and it showed up as a book he was currently reading. Im hoping that was just some marketing ploy by Audible to move "Dirty Magic" I have a hard time believing the guy who wrote the Iron Druid series actually liked this book.

Not really fantasy at all

What would have made Dirty Magic better?

This book should have been filed as a pseudo fantasy procedural. There was nothing in plot devices that couldn't have just been renamed. Covens = syndicates, Potions = drugs, Magic = chemistry. The writing was good and easy to follow and the plot had possibilities that were not explored.

What could Jaye Wells have done to make this a more enjoyable book for you?

This book could have been more enjoyable if the characters had been presented in a more realistic light. The main character was authentic but so psychologically broken that she could have never passed any psych evaluation to be a policewoman. Every trauma made her essentially become a whining wreck in a corner.

Have you listened to any of Morgan Hallett’s other performances before? How does this one compare?

Morgans performance was relaxed and nuanced in such a way that even when the portrait she was painting was unbelievable it was pleasant to listen.

This book was a great study of someone who has never gotten over teenage crushed and hangups and moved on into the grownup world where reality of the moment trumps self pity and angst.

My real problem with the story was the fact that I wanted to yell at the protagonist to get her head out of her butt and move along. The fact was her character was well written enough that I actually could believe her existence and issues. That she would have been in these situations was totally unbelievable but even those situations were well written for style and voice.

Solid start to a new series...

Audio Rating: 4.00 (Not part of the overall rating)

First Thought when Finished: Dirty Magic was a great mix of Urban Fantasy and Mystery! In other words, I dug it.

Story Thoughts: Fact: I am a huge fan of mysteries and thrillers. I get excited about good old fashioned detective work. So when I heard that Jaye was doing an UF meets Mystery book, I got excited. She did not disappoint! The mystery was solid, well thought out, and most of the case solving came from tracking down the clues through working the scene/beat/players! I am always a little worried that "paranormal" elements will be used too much to solve a case in a paranormal/mystery mix but there was a great balance here. There were all the UF elements people love so much: world building, action, and snappy dialogue. Overall this was just a good mix of both worlds and I am excited to see where the series goes from here.

Character Thoughts: Kate is an interesting leading lady. She is strong, independent, stubborn, loyal, and at times a little unlikable. She is a good cop, a good sister, and a good friend. She is also quick at learning on the job. I think the longer she is with the team (Magical Enforcement Agency) the more she will fit in with them. Here is where I think the characters shined: I really liked the MEA task force! They were a great group of characters and hopefully as the series progresses we learn more about them.


This was my first Morgan Hallett book and I thought she did an excellent job. The pacing and tone of the story was well matched to her voice! The character voices were well done (male and female)with just enough uniqueness to tell who was talking at all times. There were one or two voices that took a bit to get used too but other than that I think the narration was spot on. I will be continuing this series in audio.

Note: Yes I am ignoring the setup for a love triangle. The romance won't be the main reason that I am reading this series.

Magic, hot men and an awesome kick a$# heroine! What's not to love? Jaye Wells set us up for a great new series. This book had an intricate plot with good world building. I am not too sure who is going to be the hero to the heroine. I think it is going to be interesting to see who is going to take the starring role. So no overt romance in the first book, it’s like the anticipation before you get on the roller coaster. In this first book we get a glimpse of past interest highlighted with one man (past lover) and possible future interest with the other (new partner). There is a full cast of secondary characters that are being fleshed out. I am looking forward to the second book. It will definitely be on my wish list :)

Not a magic story, more like bad sci-fi. Drug metaphor was painful and forced. This may be a book for you, but there was so many parts that made me want to give it up, maybe I should have.

I couldn't get into this book and did not finish it. I won't get another one in this series

this book was really bad.... the characters were boring, the plot was weak, and the story made no logical sense. I made it to chapter 3 before I just turned it off.

horrid excuse for a book

it's like the author wrote a drug crime novel. Then proceeded to perform a word search for "drugs" and replaced all "drug" references with "magic." Then pretended it somehow belonged in the fantasy genera.
lackluster story that will appeal to nobody. ok performance at least by the reader

Story just felt flat. I just could not make myself care about any of if The narrator was ok I would like to hear her read a story I liked more

Not worth your time

I really couldn't stand this book. I only listened to the entire thing out of boredom. I don't know what it is about female UF writers making their lead characters soooooo whiny. And the fantasy part of this book is barely existent its more like chemistry than "magic". The lead character has no reason to hate the antagonist in this story but yet all she does is complain about what a horrible person he is. Skip this book.