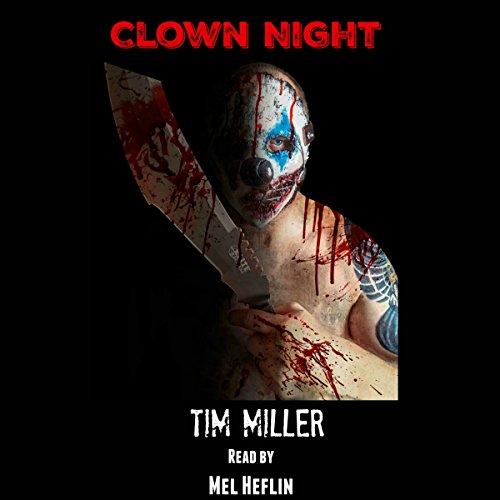 Reggie Ryan is a loser. No matter what he tried, it failed miserably. At the end of his rope and down on his luck, he stopped in a pawn shop to sell some junk he'd found while dumpster diving. While in the shop, he stumbled upon a strange clown mask. Unable to resist, he traded his items for the mask and tried it on. Wearing the mask, Reggie felt like a different person. He was a different person. No longer was he someone to be stepped on and ignored. As The Clown, he was a force to be reckoned with. That night, he goes into the city ready to show his true self. Will anyone be able to survive Clown Night?

What listeners say about Clown Night

I hate clowns! I've hated them since I was a kid thanks to Steven King. Steven King does great horror, but Tim Miller does great extreme horror! This book enforces my hatred of clowns! lol This gets pretty gory. I wouldn't recommend this to someone with a weak stomach. I loved the narration by Mel Heflin.

While gory, Clown Night is almost a social commentary. Societal sheep doing stupid things because some guy got a million views on youtube. Very good, very gruesome, and very eye-opening. If i could find someone who studied sociology, who doesn't mind the bloodbath, I'd be interested to hear what they have to say about a lot of Miller's books. Great story!

Only got 45 minutes into this and I just can’t take any more!!!

Really terrible writing, it seems like the kind of thing a teenager might write. It’s full of cliches like the female cop being ignored and belittled by her superiors, they assume because she’s a woman she doesn’t know what she’s talking about....
When was this book written?! I don’t buy that blatant sexism for one second.

The narrator constantly pauses in incorrect places in the sentences, it really throws off the flow of the story.

Maybe if the writing was better, or the narrator was more talented, it could have saved this story, but after 45 minutes I’ve had it.