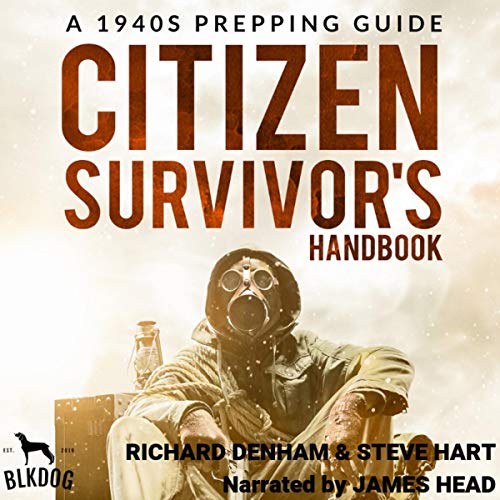 By: Richard Denham,Steve Hart
Narrated by: James Head
Try for $0.00

The prepper's guide with a difference.

During the 1940s, Britain suffered a national catastrophe that would become known as The Great Tribulation by its survivors. The remnant of His Majesty’s Government formed a department known as The Ministry of Survivors; the mandate of this office was to help, guide and inform the public through the anarchy around them. During the early years, they produced and issued a handbook known as The Citizen Survivor’s Guidebook.

However, as the situation became more desperate, the guidance within this book quickly became redundant. The ministry deemed that the only remaining course of action was to produce a second edition informing people to evacuate the chaos of the towns and cities and flee to the countryside, focusing on wilderness survival and how to be self-sufficient on the move.

This is an audiobook of a surviving copy of the second edition of The Citizen Survivor’s Guidebook.

Not at all what I thought

I had recently finished Martin Sheen’s narration of “The Home Front,” and wanted another book about WWII.
This wasn’t it.
I assumed it was literally a reading of how to plant a victory garden and how to draw your seams on for fake nylon stockings and tips on how to cover your windows for air raid drills or something....Nope. It’s fictional, and seems like it is an appendix to a novel or a series or something...I wish it had said that clearly in the description. The information is out there, (I found it after the fact) but if you aren’t familiar with the author, how are you supposed to know? The title seems like nonfiction to me, and there is no indication of the series it might belong to in the description. It was a waste of my personal time to read a fake how-to book with no factual information and little plot, but if it is actually an off branch of a series I had been into and read it is a cool concept for a short little book to round out the setting. . If it is a stand alone book it doesn’t make sense. It is written and read like a how-to book with step by steps, but more casual and interjected with very sexist fake 1940’s radio shorts.
Fair warning for anyone who, like me, was looking for some first hand history-move on this is not the book for you.