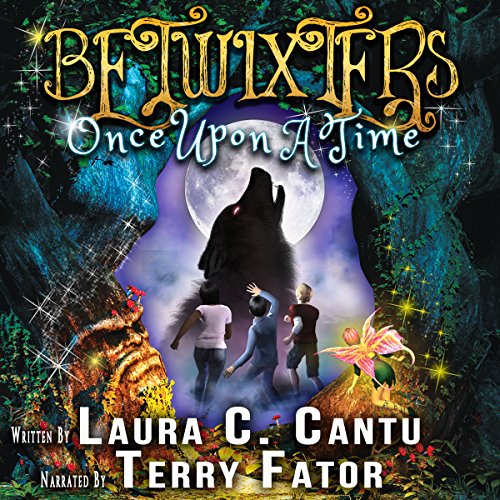 Betwixters: Once Upon a Time

Betwixters: Once Upon a Time

By: Laura C. Cantu
Narrated by: Terry Fator
Free with a 30-day trial

Narrated by Terry Fator - acclaimed as the Voice of Entertainment, Winner of America's Got Talent in 2007, and headliner at the Mirage Casino in Las Vegas!

A mysterious forest near the cozy town of Herogate, England, is more than what it seems. The gnarled trees appear to breathe, gloomy storms follow you around, and prowling shadows come to life before your very eyes. Referred to as the Dark Wood by the townsfolk, the forest is guarded by a strange old man and creatures not of this world. Even the locals never set foot in the bewitched woodlands, and trespassers have a way of turning up dead.

When Noah Walters moves to town with his parents, his father - a contractor working on a top-secret project for a private security firm - makes Noah promise to never enter those woods; but he doesn't know that fate has other plans.

Noah and his new best friends, Ethan and Skye, are chased into the Dark Wood by Grucker, a schoolyard bully, and their lives are changed forever. They are forced into the heart of the forest, where they discover a lost fairy who needs their help to find her way back home before it's too late.

Join Noah and his friends on a magical adventure as they race against time and plunge headfirst into the unknown. They are challenged with secrets to keep, a dangerous mission to accomplish, and a test of courage that will bring them face-to-face with magical creatures they thought only existed in fairy tales.

What listeners say about Betwixters: Once Upon a Time

Loved the story and the narration was wonderful! What a great book! The three kids in the story were so endearing...not to mention the dog, fairies, gnomes, and chondors... Terry Fator brought each to life brilliantly with his narration, and Laura Cantu made you fall in love with each through playful banter, adventure, and the meaning of true friendship. I highly recommend this book!

Beautiful story! ❤ I enjoyed every word.

I absolutely love how the story is written! Also the way it's being read. It draws the listener into the story that you almost feel you're in there too. Love the way Terry Fator changes the accents in characters, especially the Scottish, sometimes it was hard for me to understand but it made me laugh every time some character spoke this way. To the story, it was very pleasant to listen to something full of love in this times and I enjoyed it even though it is probably meant for children (I know my sister would love this, she is 10, but she would not understand it yet, because english is not our mother tongue). But anyway many thanks to Laura for writing something so beautiful. I truly enjoyed every word. ❤❤❤

Betwixters: Once Upon a Time.

Amazing story I am hooked! Terry Fator is Fabulous with his voices! Audio is so cool to listen to on road trips! So Proud of your storyline I am sure boys and girls, as well as Mom's and Dad’s, will LOVE it! I know everyone in my family will get a copy!! Laura can't wait for the next book in the series!