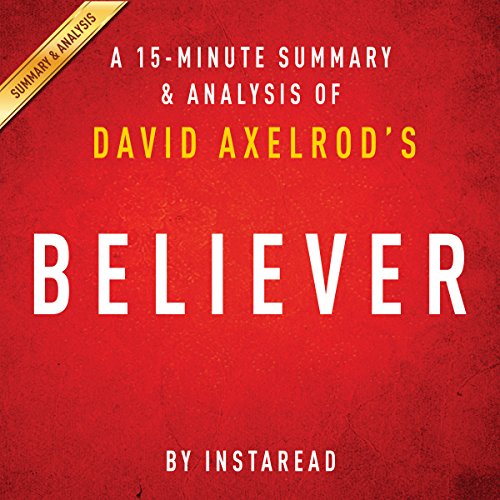 Believer: My Forty Years in Politics by David Axelrod: A 15-minute Summary & Analysis

Believer: My Forty Years in Politics by David Axelrod: A 15-minute Summary & Analysis

David Axelrod was the son of Joseph Axelrod, a man who left Eastern Europe at the age of 11, and his wife, Myril Davidson, also a daughter of Jewish immigrants. Joseph became a psychologist with a small practice that insisted on charging patients a minimal fee. He also occasionally administered psychological tests at settlement houses. Myril, on the other hand, rose to the top on Madison Avenue as an advertising executive. Their marriage ended by the time Axelrod was eight.

David Axelrod was five years old when he became fascinated by politics, after seeing John F. Kennedy at a 1960 presidential campaign rally in New York. Despite JFK's assassination, young Axelrod continued to believe in the power of politics to effect change. He became a youth volunteer for Robert Kennedy's 1964 Senate campaign and, later, his 1968 presidential campaign.

Please note: This is an unofficial summary and analysis of the book and not the original book.

What you'll hear when you listen to this Instaread summary & analysis of Believer:

About the author: With Instaread, you can get the summary and analysis of a book in 15 minutes. We read every chapter, summarize it, and analyze it for your convenience.