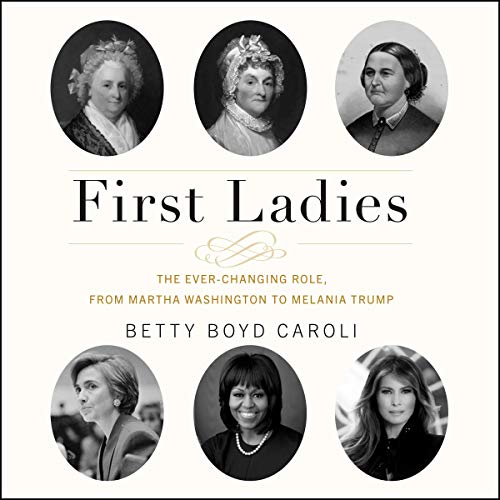 By: Betty Boyd Caroli
Narrated by: Susan Ericksen
Try for $0.00

Betty Boyd Caroli's engrossing and informative First Ladies is an essential resource for anyone interested in the role of America's First Ladies. Caroli observes the role as it has shifted and evolved from ceremonial backdrop to substantive world figure. This expanded and updated fifth edition presents Caroli's keen political analysis and astute observations of recent developments in First Lady history, including Melania Trump's reluctance to take on the mantle and former First Lady Hilary Clinton's recent run for president. Caroli here contributes a new preface and updated chapters.

Covering all 45 women from Martha Washington to Melania Trump and including the daughters, daughters-in-law, and sisters of presidents who served as First Ladies, Caroli explores each woman's background, marriage, and accomplishments and failures in office. This remarkable lot included Abigail Adams, whose "remember the ladies" became a 20th-century feminist refrain; Jane Pierce, who prayed her husband would lose the election; Helen Taft, who insisted on living in the White House, although her husband would have preferred a judgeship; Eleanor Roosevelt, who epitomized the politically involved First Lady; and Pat Nixon, who perfected what some have called "the robot image."

What listeners say about First Ladies

I struggled to finish, and was not impressed with narration or story. Too long for what was said.

Very long, but thorough book. Included too much information on President Trump, not a First Lady.