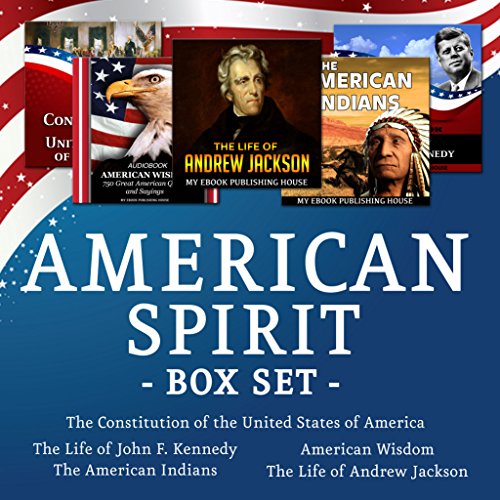 By: My Ebook Publishing House
Narrated by: Matt Montanez
Try for $0.00

Now, for the first time ever, and only for a limited time, you can get this value-priced, limited edition box set.

Audiobook 1: The Constitution of the United States of America

John F. Kennedy glimmers through history as the young, idealistic president whose Camelot administration promised a new dawn for America. John Fitzgerald Kennedy led his nation for little more than a thousand days, yet his presidency is intensely remembered, not merely as a byproduct of his tragic fate. Kennedy steered the nation away from the brink of nuclear war, initiated the first nuclear test ban treaty, created the Peace Corps, and launched America on its mission to the moon and beyond. JFK inspired a nation, particularly the massive generation of baby boomers, injecting hope and revitalizing faith in the American project. But 50 years after he was murdered, it's hard to separate the real JFK, with all his faults, from the many myths about him. This is his story of his life.

Who were the first real Americans? In this book you will be introduced to the American Indians, their society, and their culture! You'll learn amazing facts which you never would have guessed, from cuisine and sports to crafts, pottery, sculptures or even ships. The American Indians will interest general listeners as well as scholars and students in anthropology, history, literature, education, cultural studies, gender studies, American Studies, and Native American and Indigenous Studies. It is essential listening for those interested in the history of American Indians, what their life was like and what they stood for.

Listening to this recording was painful. Poor grammar by the narrator coupled with his presentation made what might have been an informative listening experience of these books a challenging and fruitless endeavor.