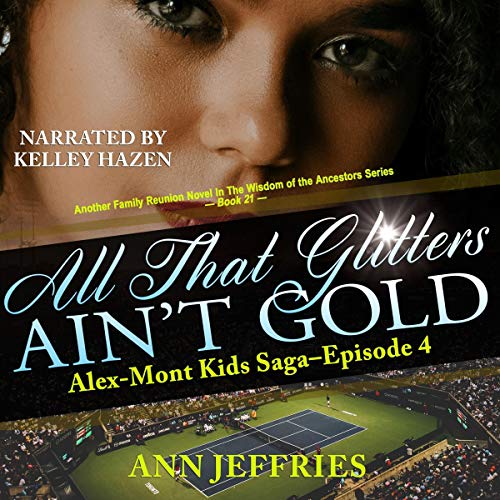 All That Glitters Ain't Gold: The Alex-Mont Kids Saga, Episode 4

By: Ann Jeffries
Narrated by: Kelley Hazen
Try for $0.00

Young textile designer Samantha Montgomery unexpectedly comes face-to-face with her one and only love, top tennis-pro Samuel King, for the first time since he dumped her on their high school prom night to take another female to dinner and the dance. Nine months later, Samuel and his new wife, Pamela, welcome their new son into their family. Can Samantha survive the accidental meeting when Samuel’s older brother, Quentin King, president of King Advertising, wants to pick up where his younger brother left off?

Quentin King had long held an interest in the quiet and shy Samantha Montgomery, even when she and his younger brother, Samuel, were known as the Dynamic Duo, when they were children on the mixed doubles' tennis courts. However, to express his interest in her then would have been wholly inappropriate and against his parents’ dictates. They have an aversion to the young woman because she was adopted and had a mixed heritage with an ethnicity other than an American of African descent.

However, regardless of his parents’ precepts, Quentin questions whether he is willing to risk his leadership role as the head of King Advertising, one of the most successful businesses of its type in the country, for a woman who may not even have an interest in him.

What listeners say about All That Glitters Ain't Gold: The Alex-Mont Kids Saga, Episode 4

Chuck and Vivian Alexander Montgomery have multi-cultural family most adopted. This book is mostly about their daughter Samantha and her reunion of high school Sam King as well as he’s older brother Quentin. It also has many characters within the families included. But I really dislike Mrs. King and all her prejudices/anti-racial for the family. Look forward to next on and all the upcoming births. I was given this free review copy audiobook at my request and have voluntarily left this review. THANK YOU

I was voluntarily provided this free review copy audiobook by the narrator and found it extremely entertaining. Following the stories of the next generation has so far been interesting now that they're adults finding their way in the world. Samantha is the president of her own textile business and travels the world to promote it and is very happy with her life. On the way home from Europe she runs into childhood friends and her world may never be the same. The strength of family is demonstrated with humour, romance and suspense. The adventures of this family always guarantees to entertain. Looking forward to more episodes.

All That Glitters Ain't Gold: The Alex-Mont Kids Saga #4 was a great read by Ann Jeffries. Samantha Montgomery was a young textile designer who never expected to come face to face again with her one and only love. Samuel is also the man who broke her heart in high school. She has an accidental meeting with Samuel, his son, his sister, and his older brother Quentin. Quentin always had been interested in Samantha but thought her and Samuel were the ones who were meant to be together. Unfortunately his parents may be the people who can keep them apart from each other. I really enjoyed this book and can't wait to read more in this series. I loved Kelley Hazen's narration and the life she brings to the characters.