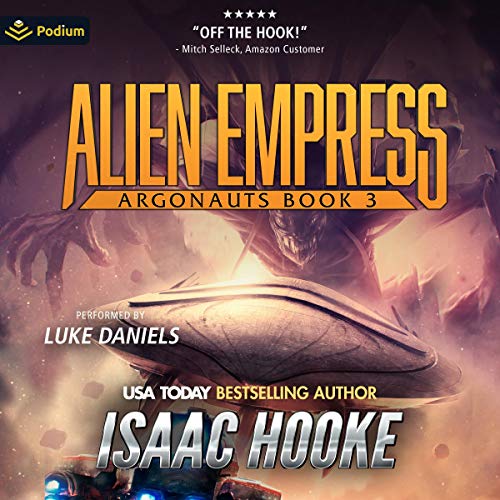 By: Isaac Hooke
Narrated by: Luke Daniels
Try for $0.00

One man's fight to save a homeworld, and his brothers, from total destruction.

The Green homeworld is under attack by an aquatic species known as the Hydra. The Greens have mounted a desperate defense, but their planet is falling.

Surus, a Green who just so happens to be the current employer of Rade and his Argonauts, plans to return to her homeworld to offer what aid she can. Rade agrees to help, as humanity owes her a great debt.

After Rade and his team arrive in specially constructed Titan battle suits, they are soon tasked with a covert operation involving the Hydra empress.

When the mission turns sour, Rade must call upon all of his training to save himself and his men, and salvage what little of the operation he can.

But it may be too late.

What listeners say about Alien Empress

Definitely one of my favorites!

I loved this audio book. It’s just the aliens, and the missions, and the characters, that all mesh together into a fantastic cohesive story. And of course Luke Daniels, a great voice actor, who should be in Hollywood right about now. Come to think of it, these books should be too. You’ll love hearing him voice the aliens, Manic, Bender, Rade, Fret, Lui, Shaw, Surus, and all the other characters. And you’ll love the words that Isaac Hooke has put into their respective mouths.

There is this awesome military Sci Fi storyline where Rade and his Argonauts have to penetrate into the mothership of an alien armada, retrieve the Alien Empress herself, and get out alive with her as prisoner. How awesome is that? It’s a very cool underwater (acturally, liquid methane) space faring species they have to deal with, and they underwater modifications to their mechs. The liquid methane environment provides some interesting elements for them to deal with during their military operations.

Don’t miss this book, or this series: too good to miss!

the story is smithing out and with the previous books you are getting more and better character development.

If your looking for a literary Masterpiece, this ain't it. I like the story itself enough to keep listening. And Luke Daniels does a good job of narrating. It does however remind me of the books I would read in my younger days in the military. I've never heard so much raunchy language in one platoon before, but I have ran across people that fit the narrative.

yet another amazing book by mr. hooke. makes my 7th book I've listened to and I'm never disappointed.

IDK if i am dressed like a "dad", but if I dont have pockets on my PANTS THEY ARE USELESS.
I also really like the depth of the hydra tech, unique battle tactics and their liquid based atmosphere.

this store was a bit dry

felt the story was sort of a clone of the last one.
3 stars as I was a bit bored.
The banter was a bit dry and forced between some of the characters.
The performance was good though sometimes his voice can make me go to sleep.