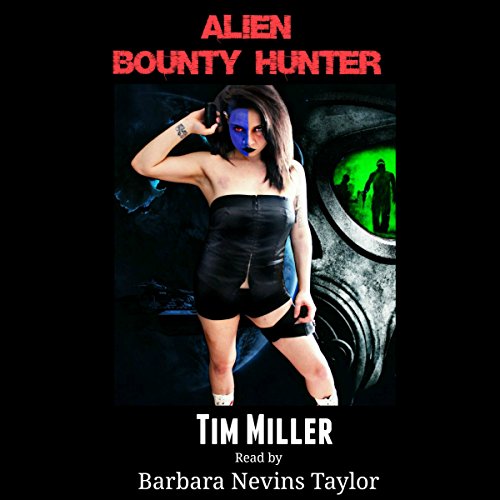 By: Tim Miller
Narrated by: Barbara Nevins Taylor
Free with a 30-day trial

Kayla Masters is the most skilled bounty hunter in the galaxy. After being attacked by a group of pirates and left for dead, she recovers but is permanently disfigured. Kayla sets out for revenge while trying to avoid the evil Regime which rules with an iron fist. While on her quest, she learns the motives behind her attack. The stakes have never been higher for Kayla but she will have her vengeance.

As always, Tim Miller does not disappoint! I always enjoy his gruesome books! lol This isn't his most gruesome work but chopping off an aliens privates and chocking him with it is just funny!

I am not sure. Someone who is seriously into female revenge and ruthless gore.

What could Tim Miller have done to make this a more enjoyable book for you?

The character was just not relatable to me, There was nothing in the story that gave her any depth or reason for me to like or dislike her.

Narration was ok for what it was.

Disappointment. The universe was interesting I just felt the story was too rushed without development of characters to make me care.

Kayla Masters is a top bounty hunter who is attacked by a group of pirates, raped and disfigured then left for dead. From there, this novella is a pretty much a straight forward revenge story. “Alien Bounty Hunter” is an extremely violent, gory SciFi fantasy story. Author Tim Miller is known for extreme violence and horrific deeds in his stories and this one is no exception. SciFi is a departure from Mr. Miller’s normal horror genre, but he delivers exactly what his fans have grown to expect. If you are new to author Tim Miller’s work and extreme violence and gore are not for you, then steer clear of this book. If, however, that type of subject matter is not a deal breaker in your reading material, you may want to give “Alien Bounty Hunter” a chance.

Finally, this audio book was provided by the narrator at no cost in exchange for an honest review, courtesy of Audio Book Boom.

I wanted to not like this book, & kinda succeeded

I'm one of those that listen to many genres, including this type. It seemed to have it all for me...action, drama, a little humor, interesting characters. The clutch started slipping in third gear, however, and seemed to get a little melodramatic for my taste toward the end. The clutch was blown by fourth gear, and it lost traction. I actually didn't finish the last bit due to boredom, so can't say if it got better. I'd moved on. Overall, I don't regret listening to it, well, the first half of it. I wouldn't feel too bad if I'd paid 99 cents for it, but any more and I'd be steamed. Not BAD overall, though.

BTW, "This review copy audiobook was provided by the author, narrator, or publisher at no cost."

This was an interesting and intense short horror, sci fi story about a female bounty hunter who seeks revenge after being attacked by pirates. First off, know that this story is very gory and has strong violence and a ton of profanity. If that doesn't bother you, then this might be the story for you. I thought it was an easy listen, and the story pulled me in and I listened to it straight through. It has tons of actions, and lots of cool weapons and aliens.

I thought the narrator did a great job with distinguishing voices between characters, and her voice had a slight gravelly sound which I felt was great for the main character, and was a great match to her description. This was my first narration by Barbara Nevins Taylor, and I would definitely listen to another book that was narrated by her.

Note, this review copy audiobook was provided to me at no cost in exchange for a fair and honest review.

Somewhat entertaining, if you're thick-skinned

Normally gore, violence and vulgarity don't bother me, but this book was littered with it. I'd say it was gratuitous, except it seemed to be the only sections that the author put some care into.

The actual plot rushes along, barely-developed, until someone needs to get raped or have a sexual organ torn off. Then the author seems to roll up his sleeves, crack his knuckles and jump right into it.

There was a lot of potential for an interesting story here, and instead we had idiotic, undeveloped characters that made decisions aimed to lead us more into ridiculous situations than to further a realistic plot.

This book felt like a snuff film spoof of a real novel.

Would you be willing to try another book from Tim Miller? Why or why not?

Unlikely. Again, I'm no prude, but it seemed the violence and vulgarity were the main focus of this book as the "story" was mostly rushed and uninteresting. Indeed, the author barely seemed interested in his own ending. It would appear his interests lie somewhere other than in writing good fiction.

The narrator was acceptable, though she did have a tendency to adopt a sort of slurring, smarmy tone that could be distracting. She did perfectly fine with female voices, but seemed to struggle a bit with male voices.

She threw in a couple accents as well that caught me off-guard (dunno why I don't expect them in space), but were a pleasant addition.

Do you think Alien Bounty Hunter needs a follow-up book? Why or why not?

I think that (star)ship has sailed.

The book rushes through so many sections of Kayla's life that if he had slowed down to actually develop them, it could have made for multiple interesting stories. Instead, we're treated to what feels like a cliff-notes version of a star wars trilogy (written for sexual deviants).

It should be noted that I received this book free of charge in exchange for a fair review.

I enjoyed listening to something different! I thought the narrator did an amazing job she gave each character their own unique accent and personality that really pulled the book together. It’s a different take on a intergalactic story about a woman redeeming herself in whatever way possible. "This audiobook was provided by the author, narrator, or publisher at no cost in exchange for an unbiased review courtesy of Audiobookboom”

I probably could recommend it to a few select friends. I don't necessarily have an issue with bad language, this book just seemed to use them for the shock value and it didn't add anything to the story. There is a graphic rape scene between an alien bad guy and the badarse main character, which sets the revenge plot into motion.

Would you be willing to try another book from Tim Miller? Why or why not?

I might. I wouldn't necessarily look for this author.

Which character – as performed by Barbara Nevins Taylor – was your favorite?

I didn't care for this material, however Barbara Nevins Taylor did a pretty good job differentiating characters. I would very much like to listen to her other voicing work IF the material was of interest.

Frankly, the language was a turn off. I didn't feel too involved with the characters or story.

This was an interesting premise, which is the reason I wanted to listen. Again, judging by other reviews, some listeners may enjoy it. It just wasn't for me.

Thanks for the opportunity to listen and review!

Rating
5 out of 5 Hearts

I was gifted an audio book version of this book by the Author/Publisher in exchange for an honest review. No renumeration was involved.

This new territory for author, Tim Miller. I have heard his Horror stories, this story is his first in Sci-Fi. He nailed it in my opinion.

I Love listening to audio books ~ this narrator did a fabulous job, switching up the voices for the different characters, I would have made a mistake and used the wrong voice at some point.

This is a well written, intensely twisted trip into the world of self-discovery. The world building is consistent and dark. Full of action, angst, mystery, suspense, and sinisterly depicted scenes that took me winding through some horrific and wicked turns.

The characters are well developed, believable, and some are wicked as sin. The protagonist, is badass and a helacious bounty hunter. But when bad things happen... Look out there will be a price to pay for someone.

I enjoyed this immensely! I recommend it for the mature 18+readers who like horror in their sci-fi.

The story is a revenge story, its not bad but its not a deep story. Hopefully we can have a stronger second story as this is really to introduce the main character and build her (kayla masters) back story, how a lone human survives in the galaxy as a bounty hunter. The biggest thing was the recording seemed to jump and cut at odd times, and was very distracting to the story.