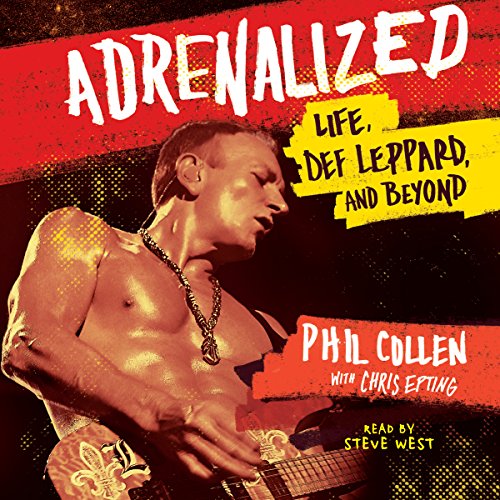 A revelatory and redemptive memoir from the lead guitarist of the legendary band Def Leppard - the first book ever written by one of its members - chronicling the band's extraordinary rise to superstardom and how they've maintained it for three decades.

Meet Phil Collen. You may know him as the lead guitarist in Def Leppard, whose signature song "Pour Some Sugar on Me" is still as widely enjoyed as when it debuted in 1988. Maybe you've heard of him as the rock star who gave up alcohol and meat more than 25 years ago. Most likely you've seen him shirtless - in photos or in real life - flaunting his impeccably toned body to appreciative female fans.

But it wasn't always like this. Collen worked his way up from nothing, teaching himself guitar from scratch as a teenager by imitating his heroes. He slogged it out in London-based pub bands for years, long before Def Leppard formed and transformed from unknowns to icons (all thanks to a little album called Pyromania), from playing openers in near-empty arenas to headlining in those same stadiums and selling them out every night. But as Collen discovered, true overnight success is a myth. Like the other band members, he had to struggle and fight his way to the top; in the end, he says, "Our work ethic saved us." Just as it still does.

This is Collen's story, starting with his first real taste of success and wild rock and roll excess as a member of the seminal glam rock outfit Girl. But once he joins Def Leppard, it's also an amazing underdog tale featuring a bunch of ordinary working-class lads who rose to megastardom, overcoming incredible obstacles - such as drummer Rick Allen losing an arm in a car crash and the tragic death of guitarist Steve Clark, Phil's musical soul mate, who lost his fight with alcoholism. Adrenalized is a fascinating account of the failures, triumphs, challenges, and rock-hard dedication it takes to make dreams come true.

What listeners say about Adrenalized

This is a great book. An inside look at the life and career of, Phil Collen. Known for his role in, Def Leppard... Phil lets you into his world. From his rise to superstar status, to his failed marriages... Phil, still carries on. Still performing today...Phil's love of the guitar, still shines through.

Loved this book. It was very inspiring makes me want to be a better musician and person.

Loved It. finished it in a Day! It was explanatory & interesting. Highly recommend that Def Leppard Fans listen to it or read it. Phil gives great advice at the end of the book.

Phil tells about his personal journey in life. Not the typical "tell all with the dirty tales", although I'm sure he has a few, just a well written book of who he is and wants to continue to be.

I've read probably 25-30 rock autobios in the past year. Some are freaking excellent (ie. Ozzy Osbourne, Elton John). Some are very lacking (ie. John Fogerty, Steve Lukather). I've chosen each one because I'm a fan of that artist and/or band that they're in. Some bands, like KISS, have autobios from almost every member. I grew up a child of the 80's, obsessed with Def Leppard. So with this being the only autobio from anyone in the band, I had to check it out.

The stories from the band's days are actually very boring. Check out Pete Townshend, Roger Daltrey, Sammy Haggar, Billy Idol, etc. if you want to hear band stories. These were all incredibly dull - like the things you would get from newspaper stories that never got the background scoop. The author clearly tries to come off as humble and self-deprecating, but when you really listen to what he's saying, it's pretty condescending. He clearly pictures himself on a moral and philosophical high ground. He continually mentions just how many pressings this album or that one sold, which award they won that year, or how many fans were in the stands for each show, as if he's trying to convince you of the prominence of this band. He even goes on at length about how he discovered that inviting his mother onto their tour would get him laid, and he took full advantage.

I get that you're a vegan, for moral reasons. And that you've read books about veganism. And that you're so incredibly impressionable that you can watch a movie and halfway through adopt whatever philosophy it's pushing onto you in its biased approach. But that doesn't make you superior. He goes out of his way to include quotes from others about his physique, his remarkable clothing style choices, etc. All the while very much glancing over the fact that he's clearly a womanizer that has cheated on every woman he's ever been in a relationship with.

For the stories about the band, alone, this still rates a 1-star. Nothing new to learn here...nothing you can't get from the "Behind the Music" of 20-25 years ago. Choose another rock autobio if you want a good read.

Great book. I wish he got more into the other members, focused on more special moments, and skipped simple recounting.

I'm a huge Def Leppard fan but this book was just too boring. My attention kept drifting off. Phil should definitely stick to guitar playing.

thank you Phil,fire sharing this past of you. I learned so much, and I am truly inspired. I realize my life is not long enough to absorb all the things this earth has to offer, so I will make the most of every day!

So much life, so short a book

Yes, I would add much more to it.

What was most disappointing about Phil Collen and Chris Epting - contributor ’s story?

That the Story was so short and yet what was presented was so coherent. There was no reason to make the book so short.

Which character – as performed by Steve West – was your favorite?

Was Adrenalized worth the listening time?

When you find a guy like Phil who can recall such details and clearly states when he cannot, it's a shame not to extract more story from him and get it into the book. Also rare to find a Rock Star of this caliber who is not conceded to take the entire success all for himself. I wanted to hear more about everything especially the making of the albums and Band dynamics. These guys fought wars in the Studio making some Classic albums and I think the listener should get to hear about this. You do get some intimate details about Phil's life and I appreciate that but as a Fan of his work for 30 years now, I still know more about the Band from just being a fan than I would have learned in this book. I do come away from this book with much more respect for Phil though, his craft speaks for itself but the person is really a kind and well worn soul.

Would you consider the audio edition of Adrenalized to be better than the print version?

What other book might you compare Adrenalized to and why?

In a class by itself

I read over and over again