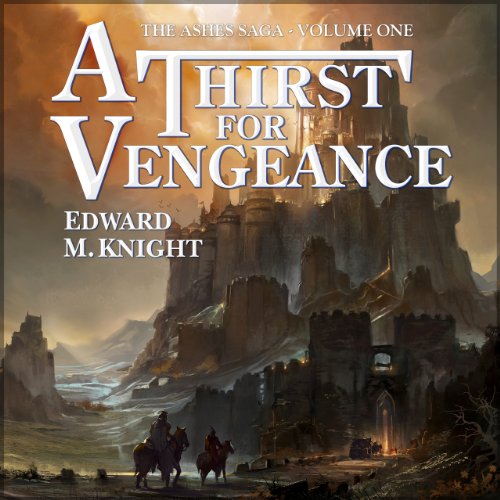 A Thirst for Vengeance

By: Edward M. Knight
Narrated by: David Williams
Try for $0.00

My name is Dagan. There are few alive with more blood on their hands than me.

I have lived a life of degeneracy. I have studied the teachings of the dark mage Helosis and walked the path of the dead. I have been to the shadowrealm and emerged with my soul intact. I have challenged the Black Brotherhood and ridden with the Knights of Valamor as a brother-in-arms. I have spoken to Xune.

I've killed indiscriminately - for money, for fame. For vengeance.

When I was young, I fell in love with a princess and was punished by her death. I have scampered, begged, and thieved. I have been homeless. I have ruled the greatest city ever built.

I began a succession war. I alone know who lifted the Seals of Regor - and how. I was there when magic was restored to this world. If I'd been born in a different age, I would have been the greatest sorcerer known to man.

My name is Dagan. This is my tale.

What listeners say about A Thirst for Vengeance

Great Story, but OMG the reader

I like the story I really do, but I can't finish it...

A different reader. Any other reader. A computer generated voice even. I just couldn't take it

I have to admit that I was expecting this to be pretty bad going in. But this book pleasantly surprised me, it was actually a decently written entertaining story. While not the best thing I've ever read in the Genre, it is a good debut novel, and I think any fan of fantasy will find it a fun read. And it only cost me $2, so it was worst the price without a doubt.

I don't get you people!

Where does A Thirst for Vengeance rank among all the audiobooks you’ve listened to so far?

Top 25 out of several thousand.

What was one of the most memorable moments of A Thirst for Vengeance?

The educational moments of the protagonist.

What does David Williams bring to the story that you wouldn’t experience if you just read the book?

The whole story was intriguing.

I am constantly complaining of the choices audible makes when new releases come out. A lot of times, it becomes obvious my taste differs from the average reader/listener. I typically agree with the obvious stuff,( i.e."song of ice and fire"), etc. Then, there are book ratings I don't get at all,(i.e." Lies of Locke Lamora"). This book is not reflected fairly in the ratings it has recieved. It should be a solid 4 stars on anyone's rank. I chose 5 stars for the hidden gem aspect.With all that said, check my ratings and see if you agree with most of my choices and grab this title.

Good story, not so good narration

The story itself is pretty good. I will definitely continue the series.

The main issue I had was with the reader. For the two main characters. he chose a way of speaking that made it sound like they were making profound declarations with every sentence. every word. Everything was drawn out and over emphasized. And at times the sentences ran together. as if the reader were trying to get through them quickly by ignoring punctuation.

For all of the other characters, the reader's choice of voice and prose was fine. In fact, one of the problem characters often spoke in different accents as part of a disguise, and whenever he did the problem with that character's voice went away.

Of course, since its the two main characters I had an issue with, much of the book was actually kind of annoying to listen to. I would have rated this much higher if not for those two specific voices, which is a shame. Like I said, the rest were absolutely fine.

I think that when I continue this series, I'll do so on my Kindle. The story is good, and I enjoyed the way the main character's tale is presented.

A decent enough story, worth the money for the Kindle version, for a quick read. Do not waste your audio credits on this one, the narration is, if anything unique! Does not do the story justice.