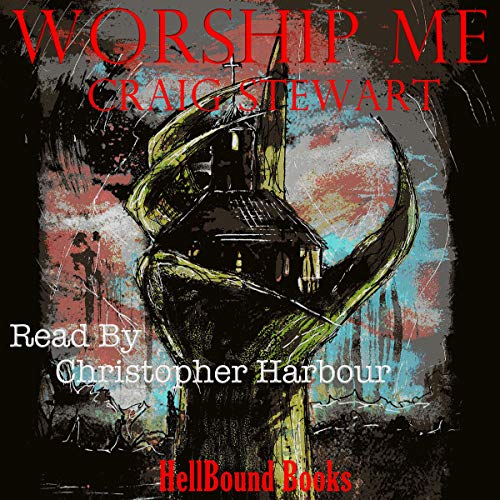 By: Craig Stewart
Narrated by: Christopher Harbour
Try for $0.00

Something is listening to the prayers of St. Paul’s United Church, but it’s not the god they asked for; it’s something much, much older.

A quiet Sunday service turns into a living hell when this ancient entity descends upon the house of worship and claims the congregation for its own. The terrified churchgoers must now prove their loyalty to their new god by giving it one of their children or in two days' time it will return and destroy them all.

As fear rips the congregation apart, it becomes clear that if they’re to survive this untold horror, the faithful must become the faithless and enter into a battle against God itself. But as time runs out, they discover that true monsters come not from heaven or hell...they come from within.

What listeners say about Worship Me

Here we have a terrifyingly graphic gore-fest that merges supernatural horror, fanatical religion, and where they intersect with the vileness of desperate humans.

The audio narration by Christopher Harbour is absolutely fantastic. Just a couple of degrees below perfect, if I'm being honest. There are a couple of points where his vocal inflections falter just a touch, and two or three of the female voices are a hair less than believable.

But really, I'm being extremely nitpicky here. 98% of his voices are basically perfect, his inflections are the same. And his reading tempo throughout the book couldn't be better.

Now, for the story itself, I'm actually really struggling to give it a rating. In terms of plot, it really is a great story. The violence and gore are a bit overly graphic, but elsewise I have no complaints.

However, there are a few things that rub me the wrong way.

First and foremost, I just don't enjoy omniscient POV. The book spends a lot of time bouncing back and forth between characters. It has a very cinematic feel, but unfortunately it didn't work for me.

The majority of the characters just don't feel real to me. There's a fair bit of background given for most of them, but it wasn't enough for me to connect with most of them.

There was only one character I was able to connect with, but unfortunately that character dies fairly early on in the story.

Later in the book, some of the dialogue gets a little... awkward. Now, I freely admit they're could be a background reason for that, but if there is it's never explored.

But, with all that being said, apart from the bits of awkward dialogue the writing is excellent. The story beats are excellent.

Throughout a good chunk of the book they're is a strong "Storm of the Century" vibe, though thankfully it eventually goes in a wildly different direction that was a pleasure to read.

The ending comes together in a wildly different direction than I was expecting, but it's pulled off brilliantly.

cartoonish,wasnt enjoyable for myself I suggest you keep looking,a wast of time if your not into boredom

In the novel Worship Me by Craig Stewart, Stewart builds off the gothic tradition to create this narrative of horror and mysticism. The gloomy, decaying St. Paul’s United Church and the sparse fields and forest that enclose it are the setting for the series of dark yet thrilling events that unfold. Like other works influenced by the gothic tradition, Worship Me is comprised of binaries: light vs. dark, hero/heroine vs. monsters, fear vs. love, and I would argue sight vs. blindness. However, rather than a taking the shape of a romance, this narrative focuses on the erotic, eliciting from its characters moments in which they question and explore their sexualities, cautiously or brazenly experience the mixture of arousal and disgust, and contemplate the intertwined emotions of terror and excitement that when fused can lead to exhilerating yet frightening bodily responses. Worship Me asks its characters and readers to recognize and accept the vulnerability of our bodies, both the physical and metaphysical. The cast of characters are scarred externally and internally from their lived experiences. While external scars are sights of pain and pleasure, those beneath the skin are fought to be kept secret even to one’s closest loves ones; however, some secrets and scars cannot remain secret any longer. This is how Stewart’s story begins. After living a life that Rick Morris no longer finds bearable, he mysteriously disappears from his home and leaves his wife, Angela, and son, Alex, for three months. In Worship Me, Stewart blends the concept of small town America with that of biblical and mythical traditions. When much to Angela’s distress Rick miraculously returns on what would’ve been Angela and Alex’s last Sunday within St. Paul’s congregation, he returns as a changed man albeit not for the better. Rick transforms from a monstrous, abusive husband and father to the servant and prophet of an ancient and tangible monster: the Behemoth. Suitably returning on the day of a sermon on religious doubt and weakening faith, Rick enters the church and pronounces himself the messenger of the monster from the biblical Book of Job. What is his message? The congregation must sacrifice one child as an offering to the Behemonth and pronounce themselves the monster’s followers. In a situation where everyone is searching for a hero, they intensify their own distress and discover monsters lie within the church walls in addition to the one outside patrolling them. Like its purpose in the Book of Job, the Behemoth arrives during and serves to spark the questioning of faith and belief in God’s presence and mercy. Like the body, Stewart illustrates faith within oneself and in a deity are as vulnerable as one’s own body, all succeptible to transformation and destruction at any time.
Worship Me is both hot and chlling. Like the novel’s characters, readers can easily become pseudo voyeurs to the salacious sadism and masochism afflicted on and inflicted by the large cast of characters. Alternatively, readers may relate to characters’ moments of questioning their faith in themselves or a higher power as well as their roles within their families, communities, and the scheme of life. In short, Worship Me will exhilarate and terrify you, may be relaable and in opposition to your beliefs simultaneously, and perhaps, most importantly, ask you to question and consider your own purpose and futility.
I found Christopher Harbour’s reading or performance of the text enjoyable. While I listened to the majority of the text at 1.5 speed, I would recommend readers play around with the audio’s pacing. There are moments in the text people may define as slow due to Stewart’s use of expansive visual details. I’d recommend to slow the pacing here to 1.25 (or one deviation slower than what your standard speed is) rather than to rush through these sections. This will help you soak in the picture both Stewart and Harbour are striving to paint through word and voice. However, for more high energy scenes, where Harbour picks up the reading pace, I’d recommend to increaseyour usual reading pace by one deviation. This allows these moments to engender the desired thrill in us as readers and/or listeners. As for Harbour’s performance in general, I appreciate that his changes in character voices were more based on emotion or their characterization rather than predominately their gender. I found this more beneficial as a reader, who is often listening to the character’s dialogue previously to the narrator’s description of the chracter’s mood or emotional state. However, I will say that there were very few voices I would say could be easily distinguished. If separated and asked to be matched to each given character, I would probably only be able to do this only for two characters based on Harbour’s performance. The rest of my matches would be based on the dialogue. Overall, I found it to be a smooth and pleasant listening experiences, sometimes surprisingly so in moments where I found myself uncomfortable based on the novel’s content.

Worship Me is an interesting horror story. There are a few slow parts, but Craig Stewart makes up for that as he keeps you guessing and encourages disturbing chills. Your emotions for characters will swing back and forth like a pendulum as you wonder what's behind the brutal madness that consumes them. Some parts of this story have the feel of Stephen King's Storm of the Century mixed with Clive Barker's Hellraiser.