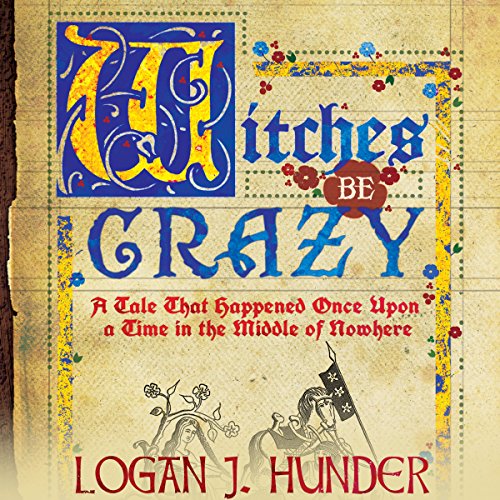 Real heroes never die. But they do get grouchy in middle age. The beloved King Ik is dead, and there was barely time to check his pulse before the royal throne was supporting the suspiciously shapely backside of an impostor pretending to be Ik's beautiful, long-lost daughter. With the land's heroic hunks busy drooling all over themselves, there's only one man left who can save the kingdom of Jenair. His name is Dungar Loloth, a rural blacksmith turned innkeeper, a surly hermit, and an all-around nobody oozing toward middle age, compensating for a lack of height, looks, charm, and tact with guts and an attitude. Normally politics is the least of his concerns, but after everyone in the neighboring kingdom of Farrawee comes down with a severe case of being dead, Dungar learns that the masquerading princess not only is behind the carnage but also has similar plans for his own hometown. Together with the only person senseless enough to tag along, an eccentric and arguably insane hobo named Jimminy, he journeys out into the world he's so pointedly tried to avoid as the only hope of defeating the most powerful person in it. That is, if he can survive the pirates, cultists, radical Amazonians, and assorted other dangers lying in wait along the way. Logan J. Hunder's hilarious debut blows up the fantasy genre with its wry juxtaposition of the fantastic and the mundane, proving that the best and brightest heroes aren't always the best for the job.

What listeners say about Witches Be Crazy

2020 has been a dumpster fire, so I was looking for something light hearted and fun. This book more than hit the mark. Think of the Princess Bride with the corny factor dialed up to a hundred in the best possible ways. Its the perfect guilty pleasure to give your brain its comedic relief, especially during hard times. I believe this now may be my favorite book.

An okay listen if you're down with misogyny

DNF at 70%, because the author's hatred of women became too obvious, and too much to deal with. It's not just that the only 'good' characters are men, including all the speaking characters, and that the protagonist is toxicity embodied (violent, angry, bitter towards women). That was already quite the mark against the book. However, at chapter 21/22, the main characters reach a village entirely populated by women, where men are imprisoned, and only random demands from entitled and moody obese pro-woman women could see them free. The town is full of 'immaculate' beds of pink flowers, there are mirrors everywhere at head-height, and of course it's hilarious that there are bathrooms everywhere. Because all women care about is enslaving men, checking themselves out, and going to the toilet, amirite?
Honestly, just disgusting.

Used reliable tropes in a slightly new way to be reliably entertaining—but dragged in all the most tired and gag inducing sexist female stereotypes, completely without apology or redemption. Come on, we can do better than this.

I really was just wanting to tide me over until Jim Butcher drops his next blockbuster Dresden Files book. This bowled me over. A nice hero arc. villians galore. pirates. wizards. Awesome. Can't wait to read L.Hunder's other books.

No reason to even have that section in the book but there it is repetitive disgust at large women. Was over the book at that point.

started out fun. devolves into sexist jokes and fumbling the plot till it gives up

Kept losing the thread, mentally nodding off as the story was unspooling. Am about one hour into it and have decided to call it quits. Sad, I really wanted to like it. Nothing I love more than a good quest. But no. Skip this one.

I really enjoyed the book ! I had to be careful not to laugh too much while listening at the gym!
Narration was fantastic, characters were voiced well and accents were very good. Highly recommend!

This started out okay, all over the place, but kind of quirky and fun, but then I got to the fat woman. I cannot progress beyond this part. I could not stomach the author’s treatment of this character. Before her the characters were imaginative and off-beat. This character was a cruel stereotype, from eating 24/7 to making the earth tremble and smelling (which makes no sense given her station). Though the man character, whose own description brings to mind something between an ape and a garden troll, repeatedly says he does not dislike this woman because of her weight, but her character, every vicious, nasty name that can be thought up regarding a fat person is hurled at her over and over, until it feels violent. It is very disturbing. Okay, she is not a good person, but none of the name calling deals with that, and this guy has come across all kinds of creatures, including a psychopath of a witch, oh, but though she is the main antagonist and we all despise her for her horrible deeds, she is strikingly beautiful, so she is given much better treatment than the fat woman, though her deeds are way worse. Well you know, there are bad men of all kinds in this book that are treated well. We are even made to admire a few of the “rogues,” but the women, well they are women, and we no what the misogyny playbook says.

I dislike writing reviews but I didn't dislike this book! What an amusing story!

Away hey and away you go to read a book about heroes, pirates, wizards, and crooks....

If you like your masculinity toxic and plots thin.

It’s like a first draft, childish and thin plot jumping around everywhere, underdeveloped with characters that are hard to like. The mix of modern and “olde worlde” speach is jarring. The dialogue is laughable at times although that’s not helped by the incredibly hammy narration.
Also, the main protagonist was personification of toxic masculinity and I hadn’t heard a single woman speak by the time I finally gave it up as a bad job.

Not what I was expecting from the reviews. I was hoping for a funny, good story. But quite frankly if it hadn't been narrated by James Patrick Cronin I would have binned it. The story was weak and rather ridiculous, there were one or two funny parts but mostly it was childish. The characters were thin with no real fleshing out that I'd expect from a book of this length.
The mixing of modern terms into a sword and sourcery era was just annoying.
Not the book for someone who likes a story that builds a world in their head and populates it with believable characters ( for the book).
All in all, I finished it but won't be going back for more.

Wrote by a virgin teen
I stopped reading after “everyone wants to bone her”
I’m done.

This started off ok but descended into some pretty awful sexist tropes. I gave up before the end

Not my usual genre, but the title enticed me. And it was free with my membership, so I gave it a try. Totally original, the narrator was excellent. It made me smile and laugh a lot.

Really enjoyed the performance, story was well written and moved at a good pace until the end

The plot is rambling, the motives not clesr, the language is a strange mix of modern and old fashioned. Some parts are fun, some misogynistic, some just strange.

Daft tale, really well read. I am often uncomfortable with American pronunciation and English accents, but Mr Cronin had a fair go at it and still made the silly story come to life. Thoroughly enjoyed it. Would recommend it if you like a giggle now and then.

Good, funny, entertaining story; with a great narration! Hoping for a sequel to come out