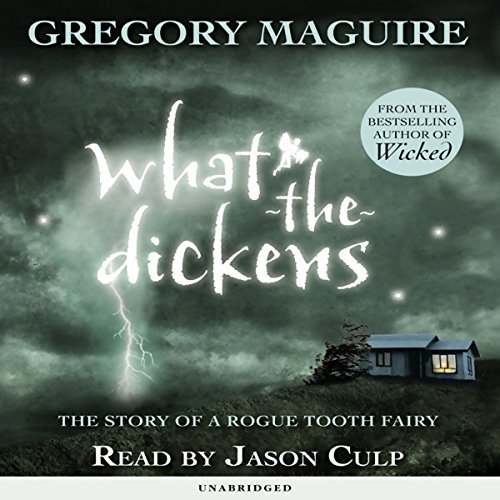 By: Gregory Maguire
Narrated by: Jason Culp
Try for $0.00

On the darkest night, amidst a terrifying storm, Dinah's parents go missing. While anxious Dinah and her brother and sister worry and huddle for warmth, their cousin, Gage, tells them an unlikely story - that tooth fairies, known as skibbereen, are living in warring colonies right in the neighborhood. According to Gage, they actually put those teeth to good use. And he, Gage, has met them. Dinah is skeptical, but as the story unfolds and the storm rages on, she begins to believe.

By turns touching and comic, What-the-Dickens is a decidedly imaginative journey into myth that could only have been penned by that premier interpreter of the fairy-tale world, Gregory Maguire.

What listeners say about What-the-Dickens

I don't know what possessed me to buy this book, other than the fact I thought Confessions of an Ugly Stepsister was brilliant (and of course that is the one book Audible does not have). This book is so far from brilliant it is not funny. Told in the drawn out, overly descriptive style of Dickens the story within a story is basic and boring. What makes it worse is that the narrator has no gift for story telling. What I mean is when the boy in the story is telling the story of the fairy (at least I think its a fairy) he still speaks in a clipped, one sentence monotone- as if the first sentence has nothing to do with the second and the second nothing to do with the third. It's like listening to the same sentence over and over. What a shame.

Couldn't get through it.

Boring and forced. I read several of his other books, but this felt like he was under contract and out of ideas.

Nothing to do with Dickens

A great argument for listening at double speed. “Princess Bride” was such a better example of this genre. Only only funny part was when Maguire was trying to convince us that his parody of religious people was based on reality. Actually the debate of fiction vs reality in literature may have had 19th century religious roots (see "Anne of Green Gables"), but mainstream academics picked up the realism mantra in the 20th century. I would have believed this story if it was set in 1950 with college professor parents.

I enjoy novels by Gregory Maguire because his fairy tales are told so with such fun.

This is a twist on the tooth fairy. If you want to get a different perspective on those old stories told when you were young, than this is for you.