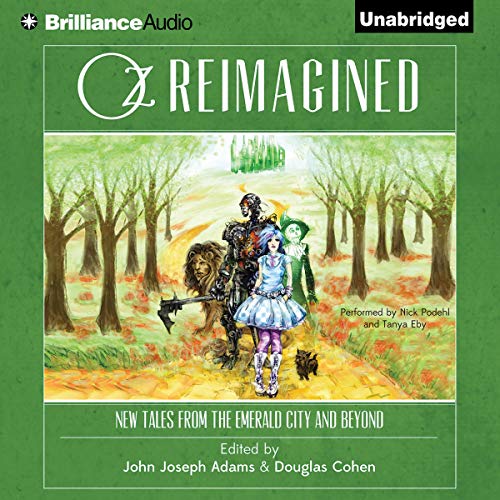 When L. Frank Baum introduced Dorothy and friends to the American public in 1900, The Wonderful Wizard of Oz became an instant, best-selling hit. Today the whimsical tale remains a cultural phenomenon that continues to spawn wildly popular books, movies, and musicals. Now, editors John Joseph Adams and Douglas Cohen have brought together leading fantasy writers such as Orson Scott Card and Jane Yolen to create the ultimate anthology for Oz fans.

What listeners say about Oz Reimagined

The Many Faces of Dorothy or Dot

YOU CAN ONLY FIND OZ WITHOUT A MAP
Most of these stories are about Dorothy or Dot as she is called in a lot of the stories. There are a couple of stories that don't include Dorothy but most have her in one form or another. Oz is in most stories and usually he is the bad guy. Here are just some of the many faces of Dorothy you will meet. Gay Dorothy, General Dorothy, Nursing Home Dorothy, Sim Dorothy, Techno Mage Dorothy, Dorothy the Witch, Dorothy of the Mental Ward, Chinese Dorothy, Contestant Dorothy, Savior Dorothy, Murderer Dorothy and A Dorothy to end all Dorothys. STORIES ARE MADE UP, EXCEPT WHEN THEY ARE NOT.

In the fashion of the Bug Eyed Monster, here are the table of Contents, but with the grade I felt they deserved.

Stories:
The Great Zeppelin Heist of Oz by Rae Carson and C.C. Finlay (B)
Emeralds To Emeralds, Dust to Dust by Seanan McGuire (C)
Lost Girls of Oz by Theodora Goss (C+)
The Boy Detective of Oz, An Otherland Story by Tad Williams (C+)
Dorothy Dreams by Simon R. Green (B)
Dead Blue by David Farland (B+)
One Flew Over The Rainbow by Robin Wasserman (A)
The Veiled Shanghai by Ken Liu (B)
Beyond the Naked Eye by Rachel Swirsky (D)
A Tornado of Dorthys by Kat Howard (B-)
Blown Away by Jane Yolen (B)
City So Bright by Dale Bailey (A-)
Off To See the Emperor by Orson Scott Card (B+)
A Meeting in Oz by Jeffrey Ford (B+)
The Cobbler of Oz by Jonathan Maberry (B)

The Narrators are good and the production is professional.

IT'S HARD WORK BEING OLD.

I love this book.

I really enjoyed listening to these stories. The narrator's are really good at drawing you in. I wish some of them could be longer.

I love “reimagined” stories, and there are lots of them out there these days. At least 90% of the stories in this book were really great, one or two not so much. Written by a number of headline authors, with wonderful narration by Nick Podehl and Tanya Eby. I got to read/listen for free through my Kindle Unlimited subscription but, gosh darn, I’m going to have to buy it now because I want to listen again and read it in the printed ebook form. The ebook offers cool illustrations at the beginning of each story as well, so don’t miss that! ☺️

An enjoyable collection of short stories by popular authors based on the Wizard of Oz. Some flesh out parts of the story, others completely redefine the classic tale in one way or another. Not bad.