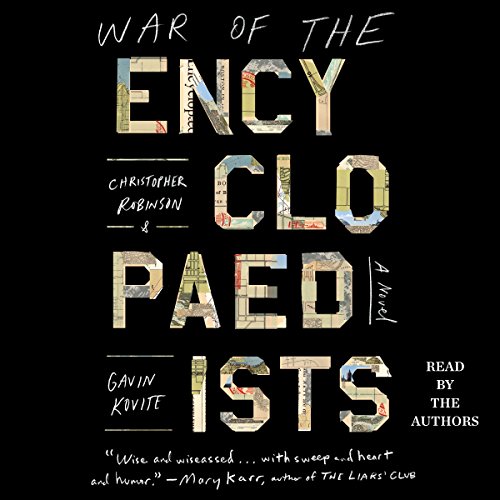 War of the Encyclopaedists

In a superb, rare literary collaboration, two major new talents join their voices to tell the story of a generation at a crossroads and a friendship that stretches over continents and crises - from the liberal arena of Boston academia to the military occupation of Iraq - in this ambitious and electrifying debut novel.

On a summer night in the arty enclave of Capitol Hill, Seattle, best friends Mickey Montauk and Halifax Corderoy throw one last blowout party before their lives part ways. At 23 they had planned to move together to Boston for graduate school, but global events have intervened: Montauk has just learned that his National Guard unit will deploy to Baghdad at the end of the summer. In the confusion of this altered future, Corderoy is faced with a moral dilemma: His girlfriend, Mani, has just been evicted, and he must decide whether or not to abandon her when she needs him most. He turns to Montauk for help. His decision that night, and its harrowing outcome, sets in motion a year that will transform all three of them.

Months later Corderoy and Montauk grapple with their new identities as each deals with his own muted disappointment. In Boston Corderoy finds himself unable to play the game of intellectual one-upmanship with the ease and grace of his new roommate, Tricia, a Harvard graduate student and budding human rights activist. Half a world away, in Baghdad, Montauk struggles to lead his platoon safely through an increasingly violent and irrational war. As their lives move further away from their shared dream, Corderoy and Montauk keep in touch with one another by editing a Wikipedia article about themselves: smart and funny updates that morph and deepen throughout the year, culminating in a document that is both devastatingly tragic and profoundly poetic.

What listeners say about War of the Encyclopaedists

Captivating and very human, but not totally satisfying.

I really liked this story. There were sections that were as riveting and relatable as anything I have read lately. I especially like the dichotomy between the hipster Seattle post-college scene and the military. Both absurd in their own way, but both full of very likable people sometimes doing unlikable things. This part seemed honest and important. This story does not tie up every loose end into a neat package. I suppose that is very real, too. It's just not very satisfying. The Mani character seemed underdeveloped, as well.

Witty, well written novel, kept me interested from start to finish. Great characters I cared about, and related to in my earlier, wilder days. Author's reading brought extra color that added to the enjoyment. I highly recommend.

Great Read that interweaves lives in a complicated, impactful way

I picked this book up thinking that it was your typical war coming-of-age novel, but it's actually a softer, more nuanced book that addresses the inner struggles of not just of the soldier, but the philosopher, the artist and the reporter as well. It's really quite well done in the way the characters' lives overlap and interweave, and the narration (which is done by both authors) provides a great entertainment value as they leverage their different tone and cadence with the appropriate parts of the story.

If you're looking for a solid novel with the spice of war, sex and personal identity, this is top notch.