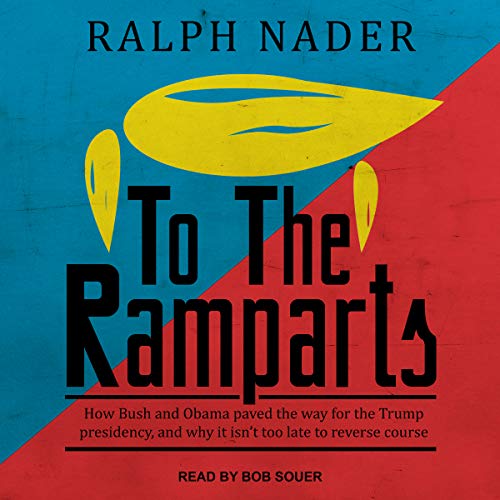 America's number one citizen Ralph Nader's latest book tells us how unchecked corporate power has led to the wrecking ball that is the Trump presidency. Nader brings together the outrages of the Trump administration with the key flaws and failures of the previous administrations - both Republican and Democratic - that have led our nation to its current precipice.

It's all in the details, and Ralph Nader knows them all. Trump didn't come out of nowhere. Bush and Obama led the way. Writing as a Washington, D.C., activist and people's advocate for over 50 years - someone who has saved more lives and caused more impactful legislation to be enacted than almost any sitting president or legislator - Nader tells us how Trump's crimes and misdemeanors followed the path of no resistance of the Obama, Bush, and Clinton regimes, which ushered in the extreme rise of corporate power and the abandonment of the poor and middle classes.

What listeners say about To the Ramparts

Old school, but worth it.

Ralph Nader is a National treasure, and I was excited to listen to his book. The narrator was a little robotic and took some getting use to. Once I began forgetting the voice and actually listening to what the books about, it became much better. After a chapter or so, Nader's bare-bones writing style worked perfectly with the narrator's voice.

Though Nader has always leaned left, he acknowledges the failings of BOTH Parties. As well as the complete collapse of Mainstream Media, which is little more than Pro War propaganda. Nader explains how citizens, right & left, can agree on many issues (healthcare, rebuilding our infrastructure, etc) and need to work TOGETHER to get Money Out of Politics, and get our democracy back. With a caustic election time coming, this book is a welcome antidote!

a call to arms

Those who are left, right and libertarian, but tired of corporate oligarchs running our gov't will be inspired by this book. The main stream media ignore him; the alt-right/lite media ignore him. But he's not going away, even after being an outspoken consumer advocate for 53 years.

Enjoyed the book and Naders views on our political situation, current and recent past. In my opinion, too much emphasis on the failings of Hillary and Obama. Also, Nader is smart, but he may not have ALL the answers.

Your participation in power shouldn't be sellable.

Ralph Nader writes a very smooth flowing capitulation of where we are, and how to make corrections to get us back on track.
Cicero wrote, "Freedom is participation in power."
Democracy should be in every step of life.
Read this book to help make that possible.

It seems that Nader disliked the policies of George W. Bush. And he very much disliked Hillary’s performance. And then, Obama displeased him even more. His dislike of Trump is off the chart.
I liked George. And, Trump just keeps doing everything that I want him to do, so I can’t complain. But Nader sure does complain.
Nader does like John Kasich. At least he likes someone.
The performance of the reader gets top rating. The perceived anger in the voice of the reader apparently reflects the author, and therefore he has earned the pay of his boss.
Nader seems to agree with me, and also Trump, in one very big way. We all think that The Swamp needs to be drained. Possibly this is the common ground that can help for making progress.

If you look around the country and think to yourself "how did we get here" then this is the book for you. This book was made for 2020. Ralphs honest, common sense and open-mind is what America needs today.

A strong and substantive summary of how we got her

Nader presents the important failing of Democrats that have gone ignored in the party and the major media but have resulted in the current political moment.

too many letters to former presidents. it should have been disclosed, or even have a title
"my letters to Bush & Obama"
Good ideas but nothing new.
wish he was the president today.

great ideas. except economic ideas unfortunately. learn MMT. stop pandering to the rich. taxes on the federal level are deleted, not hoarder for spending.

I will order the actual book. The voice performance is quite poor. Sounds like voicing from the 1950s or something. (If that makes sense.) Could not finish listening!