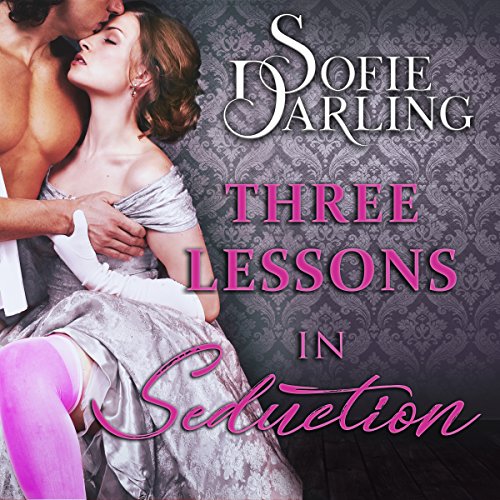 By: Sofie Darling
Narrated by: Mary Sarah
Try for $0.00

Lord Nicholas Asquith needs his wife. Too bad he broke her heart ten years ago.

Can he resist a second chance at the love he lost?

When Mariana catches the eye of the man at the center of an assassination plot, Nick puts aside their painful past and enlists her to obtain information by any means necessary, even if it means seducing the enemy agent.

Even if the thought makes his blood boil.

Only by keeping his distance from Mariana these last ten years was he able to pretend indifference to her. With every moment spent with her, he feels his tightly held control slipping.

Can she trust the spy who broke her heart?

Mariana spent the last decade forgetting Nick. Now she has the chance to best him at his own game, an opportunity she can’t resist, even as her view of him begins to shift. Increasingly, she wants nothing more than to seduce her own husband.

It's only a matter of time before mad passion ignites, a passion never convincingly extinguished. A passion that insists on surrendering to the yearning of the flesh and, quite possibly, of the heart.

What listeners say about Three Lessons in Seduction

Author's Debut Is Amazing! I loved it!!

You Are Forever In My Heart, We Will Be Wild And Brave Together

I was hooked right from the first few minutes. I hadn't heard this narrator in this wispy, sexy tone before. I think listeners will love her for what she brings to the story or dislike her for her male voices. That didn't bother me in the least as the story drew me in. The emphasis on words ending in consonants, especially when she said the name NICK. So lush. I had a slight startle each time she read the word FACT as FOCT which sounded too much like the carnal act. And it includes 3 awesome sex scenes.

A tale of heartbreak, betrayal and espionage in 1824 Paris. I could vividly see the scenes the author was painting, the dank streets of old Paris. The sights, the sounds and smells. Mariana is no coy English maiden, but a woman of 28, a mother of twins, and her husband has been killed by French spies.... or has he? And who to believe, who to trust? The web of seduction and lies is not just the week in Paris, but the past 11 years of their lives.

The minor thing that annoyed me was a whirring sound in the background, like a cassette player and it was throughout most of the audio. I noticed when it went away and then when it returned.

Sofie Darling where have you been? We have been waiting for you.

Where does Three Lessons in Seduction rank among all the audiobooks you’ve listened to so far?

I thoroughly enjoyed listening to the voice actor as she took me on a historical adventure that our author weaves. And I can see this being on my list of books to listen to again.

I would have to say that Mariana became my favorite character. She has a strong spirit that won't accept what she's been told. She's willing to pull up her boot straps and become a part of her husband's world. A man she's not very happy with.

Which character – as performed by Mary Sarah – was your favorite?

I can't say I had a favorite. She did a great job with accents and getting me immersed into what was going on. Since some of the story takes part in Paris, she gives us French accents for some characters. I felt that she could have read the whole story in French and I would have thoroughly enjoyed - even though I would have no idea what she was saying. She was part of the driving force that had me enjoying the story that Ms. Darling has written.

I can't say that there was any scene or moment that particularly moved me. Every scene was needed to lead us through this romance and the bits of suspense our two main characters create. But then I could always go back and listen to the book again and see if I could find that moment - I certainly wouldn't mind.

Ms. Darling and Ms. Sarah are a perfect couple. Our author writes about a woman trying to turn the tables on her husband and our voice actor turns the tables on the listener. It's a case where I think the reader gets more out of the story by listening than by reading. Ms. Sarah gives voice to the characters that a reader may not be able to do justice. It's a story that left me looking forward to reading and listening to both these ladies work.

Ms. Darling reminds me what I like about historical romances and also what I miss. She transports me back to a time where I would feel out of place but it doesn't stop me from appreciating what her female character went through in her story and looking forward to more. I like strong women and those that are willing to not let a man define them. The only thing that confused me was about the children that are a part of the main character's lives.

Ms. Sarah is more than a narrator. A narrator tells us a story but a voice actor gives the reader a more interesting experience. We get to hear what a character may actually sound like. We can feel as if we are a part of the story. And they take on accents that just add to the adventure that the author is taking us on.

I voluntarily reviewed an Audiobook copy of this book.

I always love romance novels where the characters are married right from the beginning. It brings a very different tone between the characters than that of two characters that are just meeting for the first time. In this case, Mariana and Nick are not at all happily married, they actually have had very limited interactions over the last few years and are brought together surprisingly to them both. How they find their way through the web of lies and intrigue that have existed between them to determine if they can ever be actually together is quite fun. The plot builds their romance up over time in a satisfying manner, a true slow burner. I found them to be such a fun pairing.

I have also always enjoyed historical thrillers, it just adds something more to the traditional historical novel and I appreciate thrillers in modern settings as well. Here, we add the layers of thriller on top of the layers of romance, which makes for added depth to the story and characters. It adds more complication to the relationship between Mariana and Nick it also moves the plot along more quickly.

Oh and I loved how each chapter began with an entry from The Classical Dictionary of the Vulgar Tongue! It was fun!

Narrator Mary Sarah has such a soothing voice that it is an absolute pleasure to listen to and I could listen to the novel for long periods of time without needing to take a break – even if I wasn’t enjoying the story! Her tone is also excellent for the thriller/spy aspect of the novel as well; it well conveys the intrigue/romance/anticipation throughout. She also has an excellent French accent for the characters from that country. Sarah appears to have narrated many romance novels and I think that is an excellent choice! I would listen to any of them!

I did like this story, however, it is a bit old for the hero to again resist marriage because of parents poor example. Nick obviously loves her from the get go but continues to say he can't because he doesn't want to end up like his parents...really? Isn't he already like his parents...miserable and unhappy.

Tired story but I do live Mary Sarah's narration.

The narrator's whispering voice really got to me but I kept listening, hoping I would get used to it. I wanted to see if the story was as good as the reviews portrayed, which it was not. It didn't make any sense, too much was not explained and the changing personalities of each character was hard to keep up with. Disappointing listen

This book is the best romance novel I’ve read! And I’ve read quite a few. I love the way this author wrote the story. I love the characters, and I loved the narrator she was awesome. I can’t wait to read her next book!