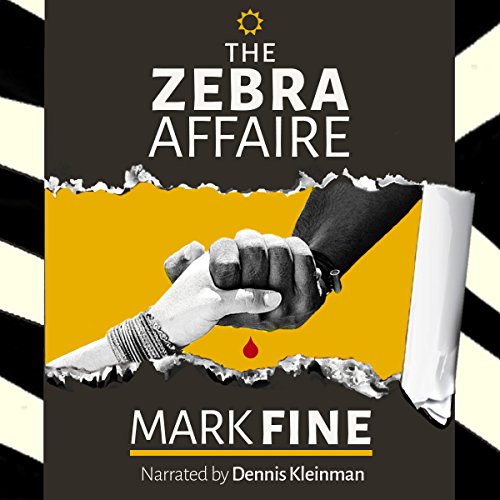 By: Mark Fine
Narrated by: Dennis Kleinman
Try for $0.00

In the spring of 1976, matters of the heart are strictly controlled by racist doctrines. In that toxic mix of segregation and tribal mistrust, an unlikely union between a black man and a white woman - an Afrikaner - shocks the nation.

It's the spring of '76. For Elsa, her affair with Stanwell may well prove lethal, as she's white and he's black, and they dared to fall in love in apartheid South Africa. The terrified lovers are the prey in a deadly manhunt from the golden city of Johannesburg to the exotic but dangerous wilds of the African Bushveld.

When affairs of the State battle affaires of the heart, ordinary people become heroes!

The Zebra Affaire is a thrilling fusion of romance and suspense - laced with rich South African history. The tension is palpable as the persecuted couple race against time and bigotry. Reviewers rave about this intimate, yet dangerous, love story, that's set against a canvas that is both vividly authentic and powerfully provocative.

What listeners say about The Zebra Affaire

Extraordinary tale from a horrifying world

I received a copy of this audiobook via AudioBoom in exchange for an objective review. This is most probably a story I would never have sought/found on my own as it put me in the midst of an alien world where all I consider normal was turned upside down. The book begins in 1976 during the iron-fisted attempts by the South African government to maintain and strengthen apartheid in the midst of a changing world. First fact previously unknown to me: the S.A. government prohibited television until 1976, and no one in South Africa had been able to witness the moon landing in '69. I've rounded my rating up from what would be a 4.5 to a five; my one reservation was that the book strove to convey so much information that the eponymous love story sometimes suffered. But I went with the five stars because overall, I am very grateful that I was able to experience this book. I learned so much and was ashamed by how little I had known or cared about what was happening to my fellow human beings. The love story itself, while it sprang to life a bit too quickly, was a beautiful one. Romance readers should know, however, that while there is a sense of peace at the end of the book, there is no traditional happily-ever-after. I am grateful to Mark Fine for writing this book and for AudioBook for sharing it with me, and I hope that many readers and listeners will give it a try. The audio performance was excellent, and I was sorry to reach the end.

Would you try another book from Mark Fine and/or Dennis Kleinman?

Would you ever listen to anything by Mark Fine again?

Was The Zebra Affaire worth the listening time?

If you want to get acquainted with the apartheid Africa, give this book a listen. It is worth the time in that aspect. Another book I would recommend is Born a crime.

The story of Elsa and Stanwell is raw and beautiful, the writing is impactful, emotive and attention capturing. This book is in the top 1% of books I've read, I can't recommend it highly enough.

The combination of this forbidden love and the setting combined to create a story that as tragic as it is beautiful.

The narrator did a fantastic job of matching voices to the characters and conveying the emotions and tones of the story.

Magical sounds of The Zebra Affaire

The Zebra Affaire” is a must-listen audiobook for those who are not familiar with life in South Africa in the 70's. For an ex-pat, a former South African, it will take you back to a time when South Africa was the world’s pariah. Though the nostalgia will overwhelm you; the places, the foods, even the local vernacular will tug at your heartstrings due to the authentic (yet easily understood) accents as narrated by Dennis Kleinman. In this Audible collaboration, Fine &amp; Kleinman are pretty amazing, creative artists with words, they have captured the colors, images and scents in sound, of not only the entire country, but also the people (in all their hues), and scored the movements and events of the era.

Unfortunately, we are still challenged across the racial divide. Change does not come easy. And that is why “The Zebra Affaire” is really significant, and why I’m so grateful I discovered and heard it. I sincerely hope this audiobook makes its way to the Museum of Tolerance, colleges, schools and other venues that champion human rights and dignity. I believe it is that important!

Most enchanting story which is almost real.
This book needs to be read by all to end racial discrimination.
You not only enjoy this sort but also learn about the turbulent history of South African apartheid.
I strongly recommend this book to everyone and hope that the author writes more stories like this.
I also admire the narrator for enhancing the suspense and drama of the story.

What a great audible

Would you consider the audio edition of The Zebra Affaire to be better than the print version?

I enjoyed the South African accent which made it much more realistic.
The narrator really nailed it.

I lived in Johannesburg during this era so I could relate to the story perfectly.

I cry for Apartheid and the human toll it took on the society.

Having lived there during this period of time it brought back many memories.
I frequented many of the places and the areas described in this book.
A definite must read for any ex pat or just anyone who would have interest in the Apartheid era.
I hope this author Mark Fine will write more books as he has a great feel for his subject.

The Zebra Affaire is a engaging historical fiction romance story. The narrator does a great job capturing the tone of the novel.

If you love Africa, you will love this powerful Story.

The story weaves through the rich and fascinating history of apartheid South Africa and the unlikely love story of two young people breaking laws and crossing cultural and racial divides. Being a native South African I thoroughly enjoyed the narration by Denise Kleinman was marvelous, and thoroughly entertaining. Mark Fine is a brilliant story teller and I look forward to more of his work. It had hints of my favorite author Wilber Smith’s style of writing.

Romeo and Juliet in Apartheid

Would you listen to The Zebra Affaire again? Why?

I read the story and then listened to the audio.No matter how you experience the story, you pick up something you missed each time.

I loved the conflict between the main character's emotional connection and the separation demanded by political and societal norms.

The narrator's rich sonorous tones add depth and complexity to the descriptive language and the historical context of the story. This is something the casual reader might miss, especially if they were intent on focusing on the plot.

The narration was too lengthy for one sitting. The narrator's voice was soothing and easy to listen to, but I needed a break.

Overall, this book is extremely well-written and the language is vivid and poetic. I would highly recommend this book to anyone with an interest in the effects of apartheid at a very human level.

A wonderfully crafted story of a forbidden love set in a tumultuous time. Beautifully written and amazingly performed. A must-have in a person's library!