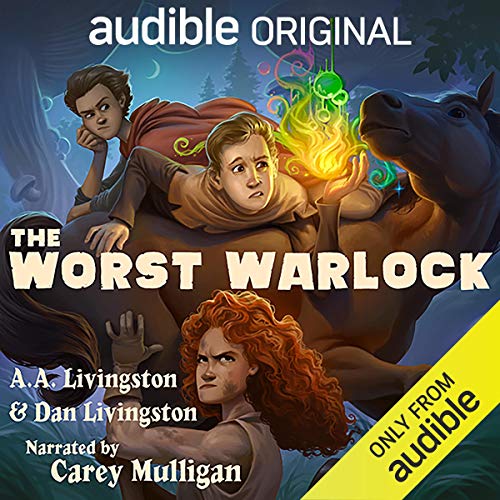 By: A.A. Livingston,Dan Livingston
Narrated by: Carey Mulligan
Try for $0.00

Elijah Muddle’s life changed in an instant. The son of a spiteful and mean manure farmer, Elijah now has become an apprentice to the town’s warlock, Caliban. The chance to escape his terrible father and learn magic? It’s a dream come true! Until...it turns out that Elijah’s internal magic is wonky, and he is the absolute worst warlock ever - all his spells go wildly wrong, causing both hilarious and disastrous consequences all over town.

Now, everyone in town is furious at Elijah, including Caliban and his dangerous jaguar familiar. Elijah tries desperately to correct his magic with the help of his best friends Marcus the thief and Tori the blacksmithing barbarian. The trio contends with the Nighty-Knights, angry mobs, and a ridiculously dangerous and forbidden spell. Will Elijah succeed? Find out in this clever and funny audiobook from A. A. Livingston & Dan Livingston.

Audible editors name their favorite Harry Potter book, and why it should be your favorite, too.

Each a tale of whimsy and adventure is brought to life with the help of talented voice actors.

What listeners say about The Worst Warlock

Moral of the story

I was the wrong audience for this tale. As an adult I found it somewhat boring; the story was geared more towards the adolescent so I really can’t speak for them. However, I give it a high score for its moral intent. The moral of the story is that connivance leads to trouble and unselfish intent is rewarding.

I appreciate that the author did not stoop to toilet humor, but was original and funny! I'd recommend this for adults and children alike!

THIS BOOK IS PHENOMENAL!!!

A wonderful Magical mess of a book!!! I loved it!!! I'm looking for more of this story to unfold!!!

This was a very creative story that keep me interested in seeing where it would go next. I enjoyed it very much and hope they come out with a second story

What a fun story!

This was a well paced, well written, and well narrated story. I enjoyed this very much and look forward to continuing on future adventures with this rag tag group of friends.

This story was very entertaining with twists and humor and a great moral lesson. I recommend this to anyone who feels like they just can’t seem to do anything right. Carey Mulligan shines reading this book. She did a wonderful job with the different voices and inflections; the characters really came to life.

Absolutely entertaining, especially if you like Harry Potter with a twist of Terry Pratchett mixed in! Pure magic it was!

This was my first book on Audible and I wanted something to help get me used to listen to a book instead of reading. This was a nice little fantasy with a great story line.

Full of whimsical mischief and good clean humor. Would have said appropriate for all ages, but the death of the villain was a bit gruesome. Still, overall greatly entertaining and you can't beat the price as an Audible included title.

I downloaded this book for my 6yo who loves fantasy fiction and always wants to listen to audiobooks in the car. I wasn’t expecting this to capture my (39yo) attention the way it did nor did I expect my 1st grader to lose interest. I just had to keep going with it to see what would happen next. After listening to the entire story, I am glad she stopped listening to it fairly early into the book as there are some violent themes and things that could cause nightmares for someone that young. Definitely 8 would be a great age to listen to this book. Enjoy!