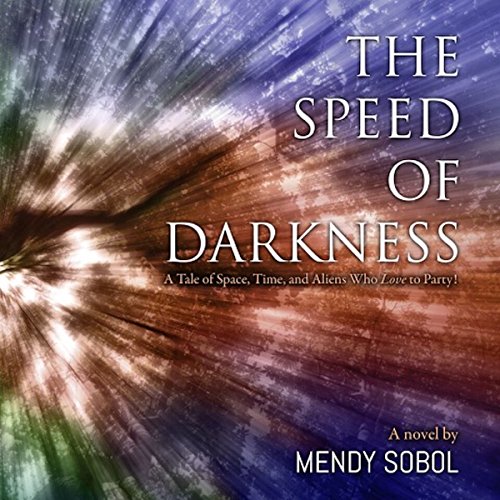 The Speed of Darkness

“After first contact, when earthlings learn the Djbrr tale of creation, a tale of conflict between Darkness and Light, humans interpret the story as a metaphor for Satan's revolt against heaven, or the battle between good and evil, or the struggle of light and darkness inside the soul. As is often the case, the universe will prove them wrong.”

Humanity faces a choice as it reacts to the ultimate undocumented aliens - the Djbrr, friendly and technologically advanced extraterrestrials who love to party.

At first, jubilation sweeps Earth following the Djbrr's arrival. But celebration turns to distrust when catastrophe strikes Earth's greatest technological achievement, Grissom Base on Jupiter's moon Io, and humans face a crisis of confidence. Kelso Frick, earth's top physicist, responds, creating Excelsior, the craft he believes will travel faster than light, an achievement the Djbrr - like Albert Einstein - think is impossible. But the suspicious death of an Excelsior crewmember, rising anti-Djbrr sentiment, and an unknown scientist's warning of hidden danger lurking behind the light barrier, raise the question: Can humanity resist the urge to do itself harm and achieve its aspirations without demonizing others?

What listeners say about The Speed of Darkness

THE SPEED OF DARKNESS features aliens, space ships, and lots of humor, but like all classic science fiction, it seriously reflects on the human condition. I highly recommend this to fans of science fiction and fans of well-written novels with engaging characters—both human and alien.